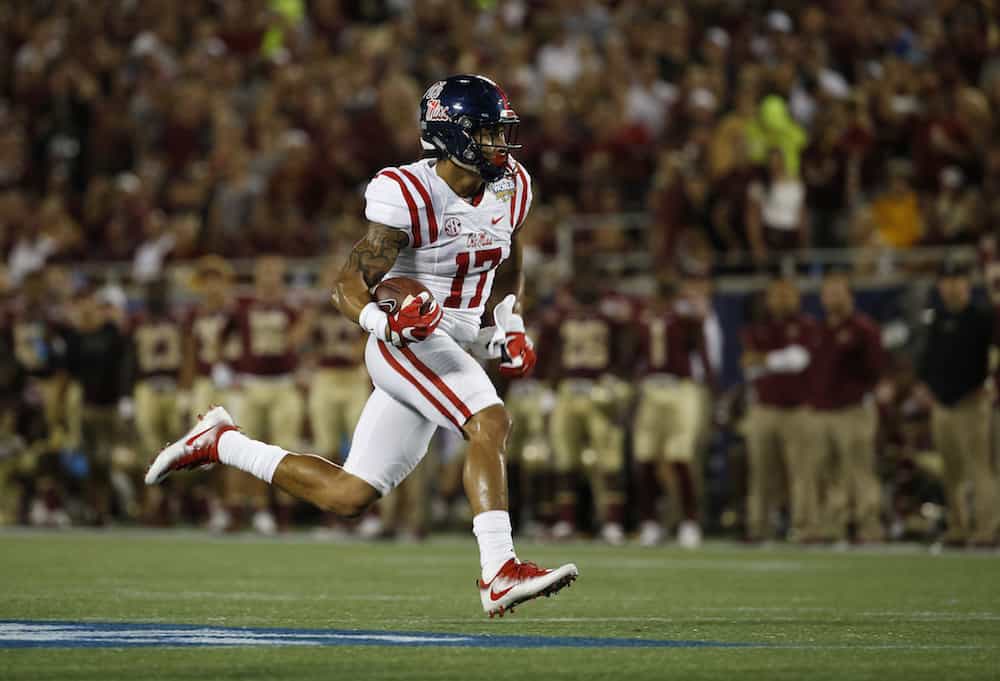 Mississippi’s Chad Kelly fakes a pitch, drops back and finds his tight end Evan Engram wide open down the sideline, after he ran past the second level of defense.

63 yards later, the Rebels found the end zone against one of the nation’s most formidable defenses in Alabama.

Hugh Freeze’s team lost by a narrow margin in the SEC West showdown last Saturday, but his group is next on the docket for Georgia, and their offense is something Bulldogs head coach Kirby Smart is paying plenty of attention to.

Kelly is the obvious offensive threat for Ole Miss as he is arguably one of the best quarterbacks in the SEC, if not the entire nation. He has racked up 953 yards and 10 touchdowns in the early stages of the 2016 campaign, and is the ideal fit for Freeze’s pass-happy offensive attack.

Smart fears the junior college transfer, as Kelly draws a comparison to Johnny Manziel, who put Smart “through an embarrassment” during his days as a defensive coordinator at Alabama.

However, it’s the playmakers around the Rebels gunslinger that bring concern to Smart. Georgia’s secondary was beat on numerous occasions, as the Tigers threw for three touchdowns. Now the Bulldogs face a new level of playmakers, and Smart focused on Engram, the senior tight end.

His versatility causes issues for opposing defenses as his athleticism grants the ability for the Powder Springs, Ga. native to perform in wide receiver positions at times. Smart indicates that his talents could cause some headaches for his defensive group, as his capabilities are unlimited.

“He’s talented. He runs like a receiver,” Smart said. “They put him in spots where he can get vertical down the field. The guy runs by (defensive backs), and he’s a tight end, so you’ve got a problem because he can get matched up on a linebacker. They do a really good job of putting him in situations to get him the ball. He’s a good blocker, too. They don’t ask him to do a whole lot of blocking, but what he has to do he does well.”

Engram has tallied 302 yards and two touchdowns in just three games of action this season. He leads the Rebels in receiving, nearly doubling Damore’ea Stringfellow, who sits behind Engram in receiving yardage for Ole Miss.

Tuesday after Georgia’s practice, Smart re-addressed the media as the Bulldogs continue preparation for the Rebels. He discussed his realistic goals for the secondary against the Rebels’ productive up-tempo style.

“You win some and you lose some, and gosh I hope we win ‘em all,” Smart said But it’s not realistic.  It’s what you’re gonna do after that that makes me feel more confident.  I’ve seen guys like Juwuan Briscoe give up a 70 or 80-yarder, and then he came back and made some good plays.  So I’m hoping to see that.

“I would love to say that we’re not going to give up any deep plays, but when you have four wide receivers out there, you have to cover them all.  You can’t cover all of them with double coverage.  Somebody’s going to be one-on-one, so we either get really far off of them.”