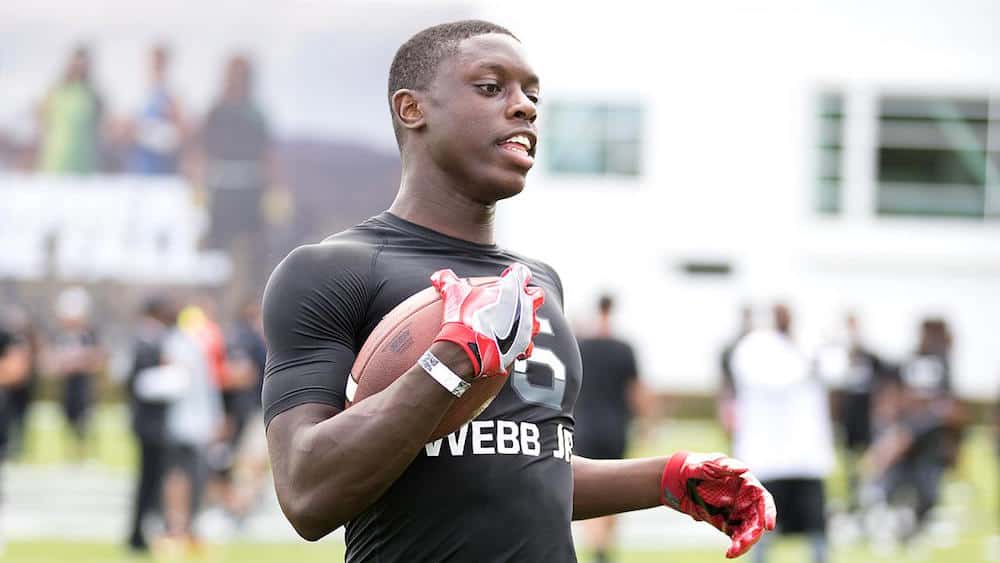 Georgia already has one wide receiver that has given his pledge to the program, and another could be on the way.

Mark Webb, a four-star recruit out of Archbishop Wood High School in Warminster, Pa., announced on Monday that he plans to announce his commitment during the halftime intermission of their nationally televised showdown against St. Joseph’s Prep on Friday. Those festivities will begin at 7:30 p.m., and will be shown on ESPNU.

THE WAIT IS OVER ‼️‼️‼️‼️‼️
Announcing my commitment Friday on 🎥ESPNU 🎥during half time of my game. Stay tuned 🙏🏿 pic.twitter.com/VQGeyOexxF

Friday’s game also features Webb’s cousin, D’Andre Swift, who is his opponent and also a Georgia commit. Back at Nike’s “The Opening” showcase event, Webb told the Atlanta Journal-Constitution that there was a “100 percent” chance that the two highly-regarded prospects would attend the same school, and that could still be the case.

Webb validated the possibility of the two being a package deal more recently as he spoke with Scout.com after his cousin Swift gave his pledge to the Bulldogs. The Georgia target said that there is a 97 percent chance that he ends up at Georgia, however he planned to take official visits and examine all of his options. Since that time, Webb has visited Penn State, the hometown team, and the Nittany Lions have been making a hard push for the Philadelphia product.

Webb has displayed his talents throughout his career and has given a strong backing for the immense attention he has received. His junior season in 2015 was his best, as he tallied 559 yards receiving and had ten touchdowns on a team that had a successful season with a 10-1 record.

The 6-foot-2, 190-pound wideout is ranked as the No. 5 player in Pennsylvania, No. 19 wide receiver nationally and No. 134 player overall in the 247Sports composite rankings. According to the 247Sports Crystal Ball, their panel of voters gives Georgia the advantage to land Webb at 67 percent over Penn State.

The Bulldogs have seemed to go all in on the East Coast product as they hope to land Webb as their third wide receiver for the Class of 2017, along with Trey Blount out of Pace Academy in Atlanta as well as three-star Matt Landers. Having these two in the fold reserves the opening for four-star Jeremiah Holloman to fill the final wide receiver opening for the upcoming recruiting class.