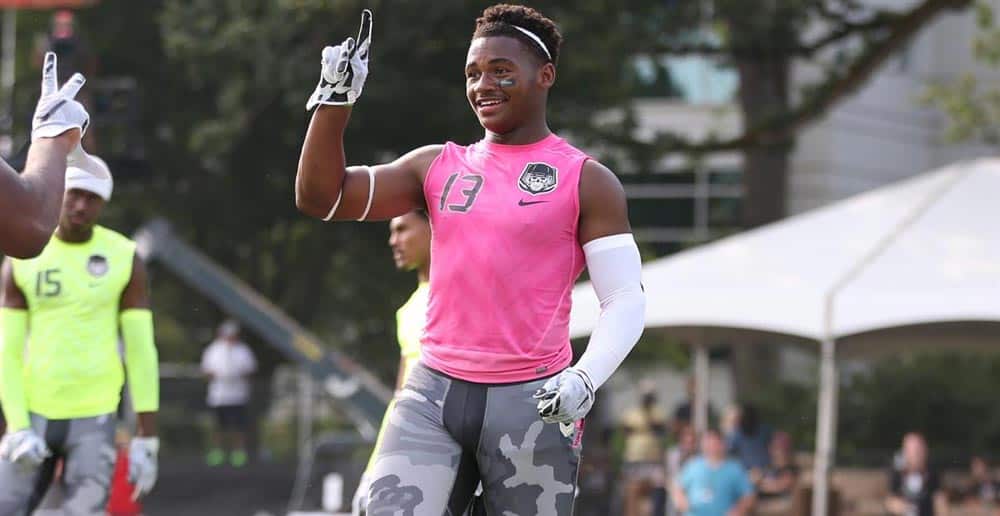 Georgia has landed one of their priority targets on Thursday as the program looks to continue their tradition of success at running back.

Four-star running back D’Andre Swift, out of St. Joseph’s Preparatory School in Philadelphia, has given his pledge to Georgia. Swift announced his decision via Twitter, accompanied by a video via Bleacher Report.

Shortly after Georgia’s G-Day spring game in April, Swift told The Inquirer and philly.com what impressed him about the program.

“It has a great football atmosphere,” Swift said. “There were 93,000 spectators at their spring game. That says a lot about the passion of their fans.”

The 5-foot-10, 214 pound running back certainly has the numbers to back up the attention he has received throughout the recruiting process. Swift ranks as the 37th overall recruit nationally, the fourth best overall running back nationally and the top overall prospect in the state of Pennsylvania, according to 247Sports. The site also lists his 40-yard dash, which demonstrates his exceptional speed, sitting at 4.43 seconds.

Swift in his junior season, posted impressive statistics as he has undoubtedly become his high school team’s leader. He rushed for 1,029 yards and 12 touchdowns in 2015. He also demonstrates some pass-catching ability as well, racking up 321 receiving yards and adding four touchdowns to his total. The display of versatility is sought after by college coaches, and those numbers could have been what attracted Georgia to Swift.

In addition to those accolades, Swift also received the honor of being named to the Army All-American Bowl as a member of the East team. The nationally televised showcase game displays the top-tier senior athletes, and always promises to be full of SEC caliber talent.

Swift had plenty of options to choose from, as he received a total of 23 offers. He narrowed down his list of offers back in May, showing a desire to play in the Southeastern Conference. His top-five included Alabama, Florida State, Georgia, and Penn State.

It was evident that schools in the South drew more attention than schools up North near his hometown. His high school coach at St. Josephs, Gabe Infante, also spoke to The Ledger on his recruiting and his desire to play away from home.

“He’s always talked about going South,” Infante said. “I think the kid is inclined to play in the SEC or ACC.”

With the Georgia careers of Nick Chubb and Sony Michel coming to an end, Swift hopes to join the new freshmen Elijah Holyfield and Brian Herrien and add to the star-studded stable of running backs, and continue the extreme productivity at that position. Swift is the fifteenth commitment landed by Georgia head coach Kirby Smart, and the second running back of the class, joining four-star Toneil Carter.

Georgia could continue go back to the well, in terms of adding players from Pennsylvania. The Bulldogs also exhibit interest in four-star wide receiver Mark Webb, and he could potentially join Swift as players from the northeastern state.