Bulldogs, Chubb come from behind to defeat UNC 33-24

Bulldogs, Chubb come from behind to defeat UNC 33-24 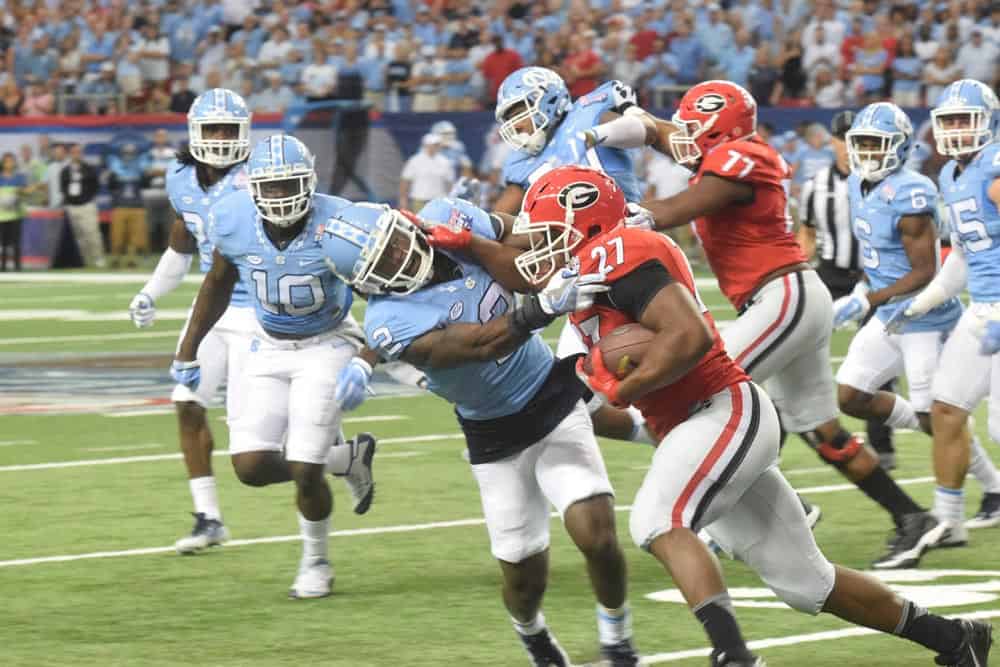 Nick Chubb’s return to active football was amazing, stupendous and, for the sake of the Georgia Bulldogs, truly heroic.

Chubb’s final touchdown dash, his 32nd and last carry of the game, left him at 222 yards, a CFA Kickoff Classic record and the third 200-yard effort of his career. Such gaudy numbers seemed a million miles away 10 months ago, when the Cedartown, Ga., native went down with a severe knee injury in a game at Tennessee.

‘’Nick Chubb is a special person,’’ Georgia coach Kirby Smart said. ‘’He’s got great humility, has a great family and he works so hard. Not many people know what he’s been through to reach this point. There’s a reason he’s in the shape he’s in; it’s because of the way he works.’’

‘’It felt great to finally have a chance to come out here and play as a team,’’ Chubb said. ‘’For me, coming back out here for the first time felt amazing. I just took my mind off everything else and just played for my boys, the guys I’ve been with for the past couple of years. I felt good throughout the game. I had no idea where I was at any point in the game, as far as carries of yards. None of that matters to me. If the team calls on me, I know all of them are behind me.’’

The win opened the Kirby Smart era of Georgia football victoriously and in record-setting style. It marked Georgia’s first win in school history over a nationally-ranked team away from Athens.

‘’Our goal tonight was two-fold,’’ Smart said. ‘’We wanted to help our players understand how to play Georgia football. What that is, and get them to give the effort to play with the competitiveness and toughness that we want. That was it. It wasn’t about the scoreboard. It was just about doing that. I felt like if they did just that, then I’d be comfortable with how they played.

‘’They were resilient, they hard adversity and they kept fighting. There were a lot of doubters when they ball got kicked off and run back to start the second half. A lot of ‘here we go’s.’ But not one kid on that sideline doubted it.’’

After trailing for much of the second half, the Bulldogs drove 71 yards for the go-ahead score midway through the final quarter. The key play in the drive came when freshman Jacob Eason found Isaiah McKenzie streaking down the right sideline for 51 yards to the UNC 16. The drive stalled, however, and William Ham restored Georgia’s lead at 26-24 on a 29-yard field goal with 5:27 left.

Carolina’s next possession started ominously when the Tar Heels were flagged for an illegal block on the ensuing kickoff. Starting inside its own 10-yard line, UNC was stymied on three plays, the last of which was a first-down completion overturned by an official review.

Georgia needed just one play to put the game out of reach. Chubb took a pitch from Greyson Lambert, squirted off right tackle and outraced a Carolina defender down the sideline for his second and final score of the night.

Trailing 14-10 at halftime, North Carolina appeared to seize the game’s momentum on the second half kickoff, when T.J. Logan streaked 95 yards for a touchdown. Georgia’s next drive, though it covered 51 yards and used 12 plays, resulted in a missed Ham field goal from 42 yards.

The Tar Heels made quick work of their opportunity, stretching the margin to 24-14 on a 21-yard Logan touchdown run with 6:34 left in the third quarter.

It proved to be Carolina’s last score of the night.

Georgia responded with a 75-yard scoring drive that included four successful third-down conversions. Aided by a pair of key pass interference penalties on Carolina, the Bulldogs rang the bell on a 17-yard TD run by McKenzie at the 1:19 mark of the third quarter.

Two more UNC penalties — an ineligible receiver flag, as well as an unsportsmanlike conduct call on the Tar Heels’ head coach Larry Fedora — backed his team to its own 4-yard line on its next possession. The Bulldogs capitalized when Roquan Smith tackled Elijah Hood in the end zone for a safety that narrowed the margin to 24-23.

Georgia struck first on its second possession of the game. Chubb began to assert his dominance on the ground by rushing for 37 yards in a touchdown drive that he capped with a 2-yard run.

‘’I really thought our line of scrimmage was the difference in the game,’’ Smart said.

The Bulldogs return to the field next Saturday in their home opener against Nicholls. Kickoff is at 12:00 p.m. and the game will be televised on the SEC Network.

*Historic Season Opening Win: For the first time in school history, Georgia notched a season-opening win over a ranked team away from home. Coming in, Georgia was 8-9-1 against ranked teams to open a year, going 8-2 in Athens, 0-5-1 on the road and 0-2 in neutral site games. Tonight, the Bulldogs posted a 33-24 win over No. 22 UNC in the debut of coach Kirby Smart. Georgia now is 93-27-3 in season openers including winning 17 of its past 20. Georgia now leads the UNC series 17-12-2.

*Chubb With Impressive Return: In his first action since the Tennessee game last year (Oct. 10, 6th game of year) when he went down with a knee injury, junior tailback Nick Chubb returned to action, finishing with a Chick-fil-A Kickoff game record 222 yards on 32 carries (6.9 avg.) and 2 TDs. He went over the 200-yard mark with a 55-yard TD scamper with 3:34 left in the game to put Georgia in front 33-24. It marked his 3rd career game of more than 200 yards, only Herschel Walker (nine) had more in UGA history.

Chubb started today, and at the half, he had 20 carries for 118 yards and one TD. It marked his 14th career game with at least 100 yards, good for fourth in school history. He had a streak of 13 straight until the injury at UT. Georgia’s starting offensive line paving the way today featured Tyler Catalina (LT), Isaiah Wynn (LG), Brandon Kublanow (C), Lamont Gaillard (RG) and Greg Pyke (RT). In the first half, Georgia tallied 35 offensive plays with 28 on the ground and seven through the air. The quarterbacks of Greyson Lambert (2-4, 31 yards) and freshman Jacob Eason (2-for-3, 36) combined to go 4-for-7 for 67 yards.

*Nice Debut/Opener: Freshman RB Brian Herrien cruised in for a 23-yard TD on his first career carry. It gave Georgia a 14-7 lead following the PAT, capping a 56-yard drive in 2:19. Junior Isaiah McKenzie had his first career TD, a 17-yarder from freshman Jacob Eason (his career first TD pass) to close the gap to 24-21 with 1:19 left. McKenzie finished with a career-high six receptions for 122 yards including a career-long 51-yarder in the 4th quarter. At QB, freshman Jacob Eason finished 8-for-12 for 131 yards and one TD. Redshirt sophomore PK William Ham kicked the go-ahead field goal, a 29-yarder with 5:27 left in the contest for a 26-24 lead. It was his first successful one after missing from 42 yards in the first half. He saw action in kickoffs and on PATs too.

*Defensive Tackle Leaders: Georgia was led by junior Malkom Parrish with seven stops followed by sophomore Roquan Smith with six. At the half, Georgia’s leading tackler was graduate transfer Maurice Smith (Star) and true freshman David Marshall (DE) had four tackles apiece. Marshall had the team’s only sack. Carolina’s offense was held to 159 yards, including 89 on the ground, and 10 points. For the game, UNC had24 points and 315 yards of total offense. Last season, UNC set school records for points in a season (570), points per game (40.7) and TDs (73).

*No Points Off Turnovers: Georgia did not create any turnovers. The Tar Heels forced a fumble at their own 12. It led to a punt after three plays and a net of four yards.

*Last Time: Georgia registered a safety (Roquan Smith tackle on a pass) with 48 seconds left in the 3rd quarter to make it 24-23 UNC. It was the first by the Bulldogs since 2013 when the Bulldogs blocked a Louisiana-Monroe punt out of the end zone. UNC’s T.J. Logan took the second half kickoff 95 yards for a TD for a 17-14 lead. It marked the first KOR-TD against Georgia since 2013 (Brelan Chancellor-North Texas, 99 yards).

*Up Next: Georgia (1-0) plays host to Nicholls (0-0) next Saturday, Sept. 10 at Noon on SEC Network. It will be the home opener at Sanford Stadium and season opener for the Colonels.