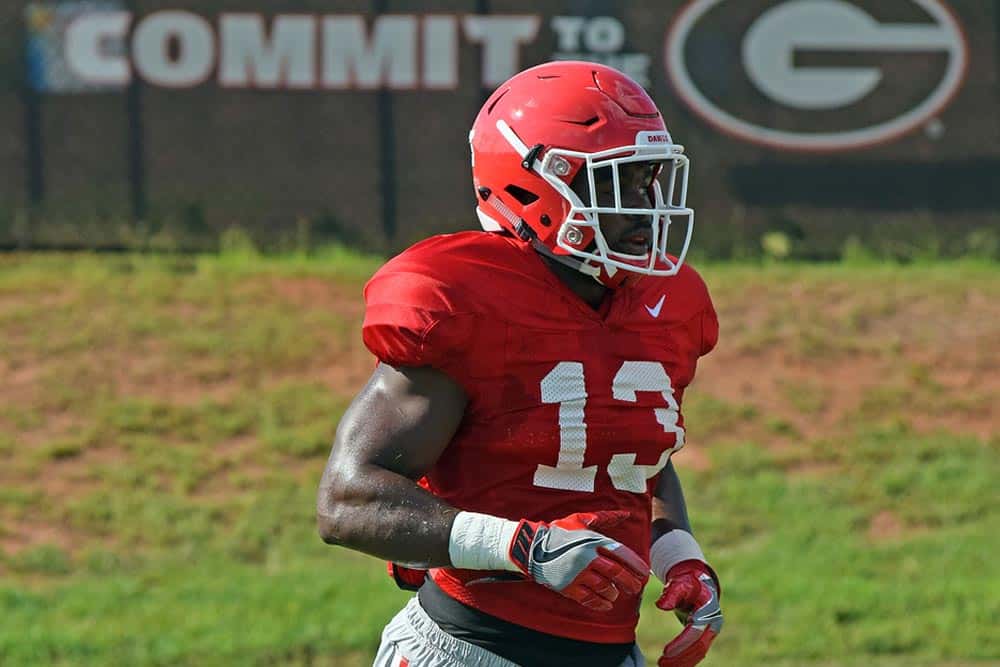 One of Georgia’s newcomers sustained an injury, and it’s in a position where the Bulldogs can least afford it.

True freshman running back Elijah Holyfield injured his ankle during Saturday’s scrimmage at Sanford Stadium. According to Jason Butt of The Telegraph, Holyfield received a walking boot in order to protect the injury. Georgia head coach Kirby Smart did not comment on the injury after the scrimmage, and will not speak to the media until Wednesday.

The injury situation was first reported by AJC’s DawgNation.

A source with knowledge of the situation has told SicEmDawgs.com that Holyfield should be “fine.” Although a timetable for Holyfield’s return has not yet been given, the downplay of the injury would convey that the freshman has a low ankle sprain which is of the lesser severity and may not keep Holyfield out for a long period of time.

Confirming our report on Saturday, Smart told David Johnston of local Athens radio station 960 The Ref (via the Athens Banner-Herald) that Holyfield isn’t expected to miss much time.

“It’s not a major ankle (injury), it’s not a high ankle,” Smart said. “It’s not as bad as (tight end) Charlie Woerner’s was. We think he’ll be back by the end of the week. He’s out there pushing on it right now. It’s not a major deal.”

This serves as a big relief to Georgia and their core of running backs, as losing depth at that position would be costly. The Bulldogs are already in a tight situation with Nick Chubb and Sony Michel recovering from severe injuries. While Chubb is expected to return for the season opener in 14 days, Holyfield should still back up Chubb with Michel being highly questionable for the season opener.

Holyfield has received a bulk of the carries throughout preseason practice, assuming he would have a significant role. If Holyfield is to be sidelined for the opener, Georgia will only be three men deep at running back with Chubb, Brendan Douglas, and Brian Herrien, assuming Chubb sees the field and receives a notable workload.

Smart spoke highly of the freshman over the summer, and expected big things out of Holyfield throughout preseason camp. Holyfield has met those expectations, and he and the Bulldogs staff are excited to know he shouldn’t miss time.

“I will say this, if you’re going to play a true freshman, one of the easiest positions to play is at running back,” Smart said at SEC Media Days in July. “You’re carrying the ball a lot, other than the protections, you can just do what you do instinctively. Whether (Holyfield’s) ready to do that or not, I don’t know. (But), he knows how to work out. He knows how to compete. ”