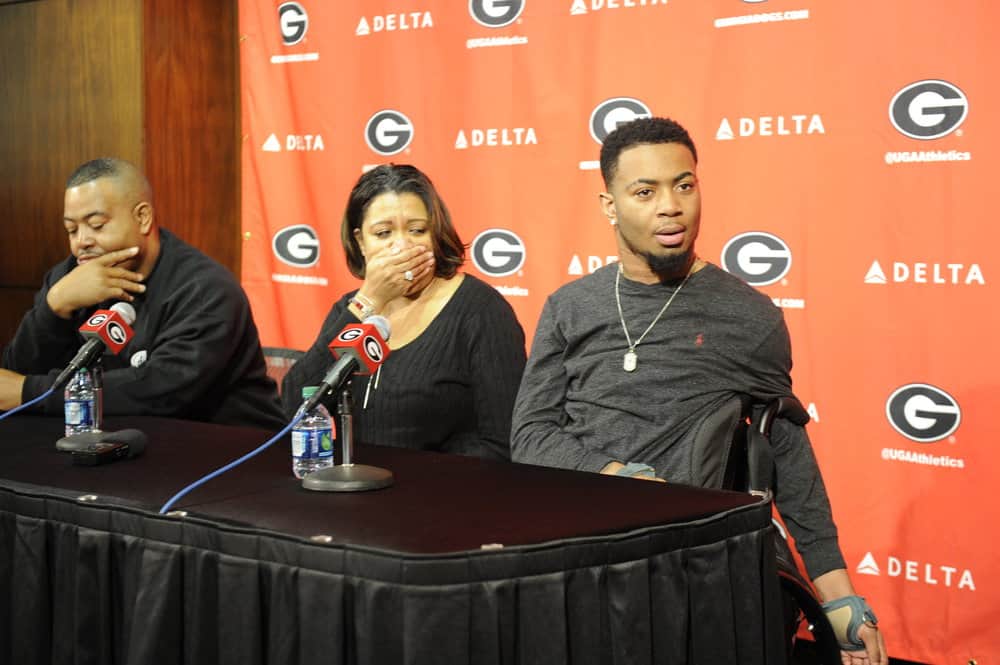 Devon Gales, the Southern University player who sustained a spinal cord injury last September in Athens, has been dealing with an uphill battle for the past eleven months. When he and his family returned home for a quick visit, the hill got a bit steeper.

Devon and his mom Tish have been residing in Atlanta as the former wide receiver undergoes daily treatment at the Shepherd Center. For Tish’s birthday, they intended to make a quick trip to Baton Rouge in order to spend a few days with the rest of the family.

In a time intended to be filled with joy, it was exactly the opposite.

They arrived in Baton Rouge only to clash with horrific conditions, a flood which has had an extreme impact on the southern Louisiana community. Rather than celebrating, they found themselves in a bind.

Their home in Baton Rouge is not modified for Devon’s needs, except for a widened bathroom door and a hospital bed, which leaves Devon with limited mobility on any given day. With weather serving as a huge barrier, Devon’s physical mobility and ease of functioning was slim to none. The family had no choice but to figure a way to get back to Atlanta, however they had no way to do so.

Georgia, who has adopted the Gales family as their own after dealing with the injury sustained on their turf, came to the rescue yet again.

Bryant Gantt, a staff member at Georgia, is known as Devon’s godfather and has had a sizable impact on his life. Over the weekend, he served as an “angel in disguise” and helped the family in a huge way.

“Devon had been conversing with (Gantt) about our progress as far as trying to escape the flood,” Tish Gales told SicEmDawgs.com. “Devon told Gantt that he was ready to come back to Atlanta. The next day, he has plane tickets for all of us to fly back home to Atlanta. Gantt truly means the world to us.”

This serves as Georgia’s latest act of kindness to the family, as Devon stays connected to the football program despite the coaching change and has spoken to new head coach Kirby Smart and numerous players on multiple instances.

But this only serves as a temporary fix, as their long-term plan is something they plan to soon address.

The amount of time that they will remain in Atlanta is unknown, and it could be permanently.

The Triumph Over Tragedy foundation has been exhausting all efforts to raise money to build a handicapped accessible home for the Gales family in Baton Rouge. But with a desire to remain in proximity to the Shepherd Center in culmination with the ravaging floods, the potential of building that promised home in Atlanta may have increased.

“We would like to stay in Atlanta permanently, and the organization has asked us if we would like the house built here,” Tish Gales said at the Shepherd Center last week. “However, Southern University has offered Devon a full scholarship for both undergraduate and graduate school, so that’s why we are currently planning to move back.”

The organization has consistently campaigned to raise money for the home by selling “Power G” Gales shirts and collecting donations. But they have yet to reach their goal despite support from many Georgia fans, giving reason for their delay in construction. A donation which could help bolster their funds could be looming however, as construction is planned to begin in the near future.

The founder of the organization, Reggie Jones, has been taking to Facebook to urge people to donate and help the Gales family.

“Their current home is now under water,” Jones said with a picture of the flooded home to follow. “Please consider donating to help expedite the completion of their new home.”