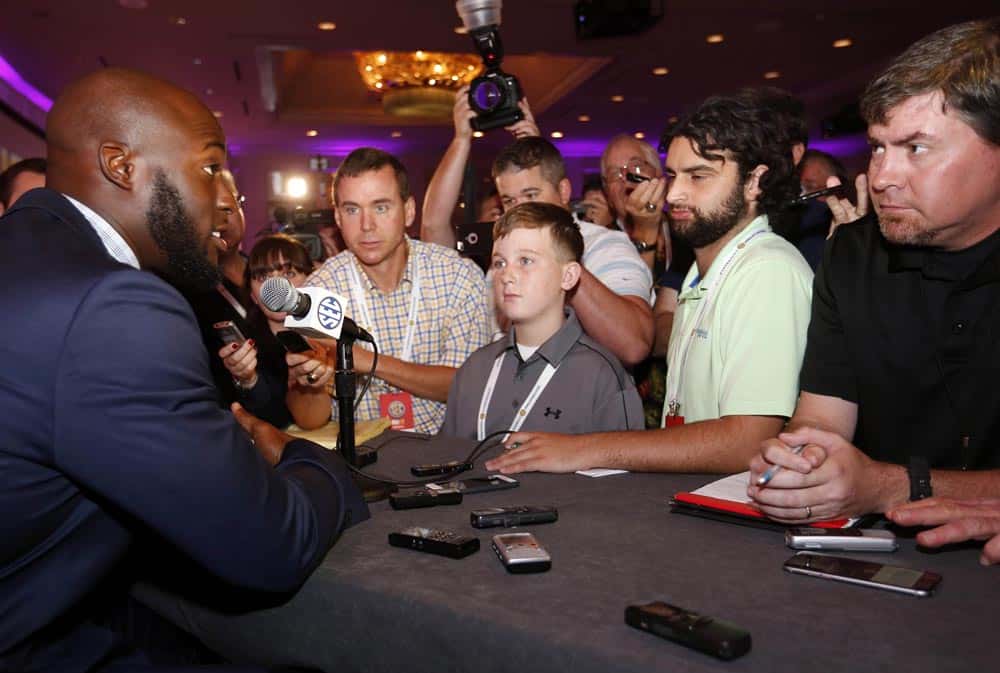 HOOVER, Ala. – The debate all throughout the SEC during the past two seasons has been who the superior running back is, whether it be Georgia’s Nick Chubb or LSU’s Leonard Fournette.

Many people may assume there is a budding rivalry between the two star backs, but that’s far from the truth. Although the two may compete to see who can perform better each season, it’s all a friendly competition. The two perennial rushers actually have a strong bond.

Fournette and Chubb met for the first time at the national Nike camp, “The Opening,” during their junior season in high school, and stayed in contact. There is a star connection there, as both ended up to have special futures as both are candidates for the Heisman Trophy.

Three years later, they reconvene where they first met, in Oregon at “The Opening,” to lure recruits to LSU and Georgia, respectively. However, Fournette says he and Chubb were able to spend quality time throughout the week, and they officially “became brothers.”

Along with their friendship, Fournette also has plenty of respect for Chubb and what he brings to the field. At last year’s SEC Media Days, he said Chubb was a better running back. He was asked if he changed his mind after he rushed for a whopping 1,953 yards with 22 touchdowns last season.

“I still feel that way,” Fournette said. “Not everybody was talking about him because of his injury. That kind of hurts me for him. That shows most of this is about business at the end of the day. I just talked to him and gave him a few words of encouragement.”

Chubb rushed for 747 yards and 7 touchdowns in only a half-season last year, and Fournette believes that should be respected. Fournette says he wants to see Chubb on the field, and says he’s currently trying to get strength in his leg to play in the season opener against North Carolina on Sept. 3.

“He told me he’s working right now,” Fournette said. “No days off is what he told me.”

As Chubb continues to reach his goal, Fournette gave him a bit of inspiration and told him to listen to the gospel song “No Weapons” by Fred Hammond to get through the recovery of his PCL injury.

Kirby Smart, the man calling the shots for Chubb, echoes Fournette on his work ethic and passion to get back on the field.

“Nick is working rigorously,” Smart said. “I mean he is passionate about his work ethic and he takes pride in that. I don’t think anyone would expect anything less from Nick Chubb.”