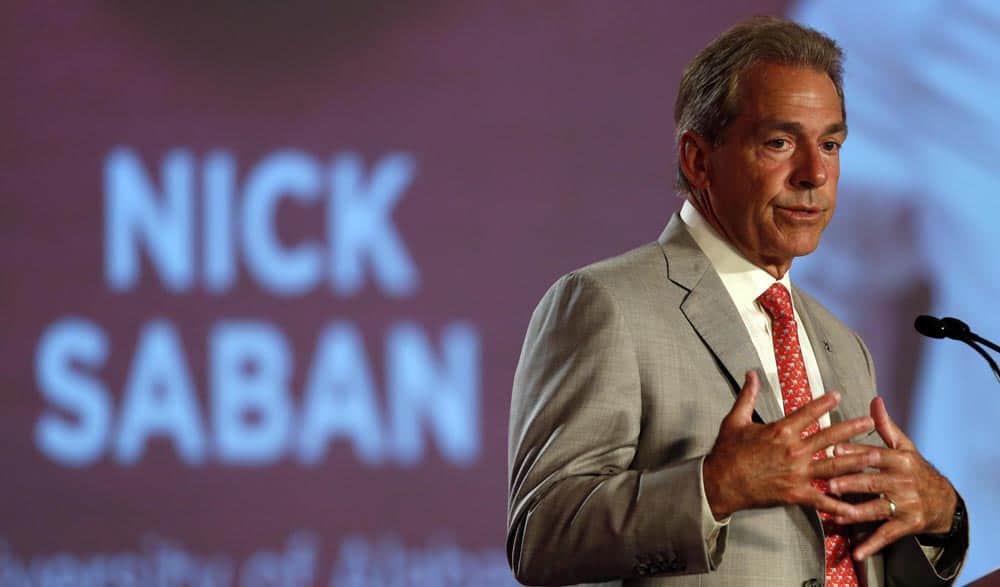 HOOVER, Ala. – The third day of SEC Media Days began on Wednesday, and Alabama took the stage. Secondarily to Georgia’s session on Tuesday, this was the most intriguing session for Bulldog fans.

The comments by Alabama head coach Nick Saban and his players on Kirby Smart, Glenn Schumann and Mel Tucker were to be of interest, due to their previous tenures in Tuscaloosa.

Saban, a mastermind that Smart learned under for 11 seasons, hopes his numerous assistants that are now elsewhere as head coaches, can take something away from their time at Alabama. When he is slated to face his previous assistants, their job well done at Alabama leads Saban to bring nothing but respect.

“Hopefully, some of the things they learned in our program will help them be successful,” Saban said. “We certainly wish every one of those guys the most luck in terms of turning their programs to having successful programs. Every one of those guys did a tremendous job for us and we appreciate the job they did. When we play each other, you have a tremendous amount of respect for them and all they’ve done in the job where they are, and you have that respect because you’ve worked with them and know them really, really well.”

Along with Saban, some Alabama players also opened up on Smart and how he was beneficial to their successes. O.J. Howard, the senior tight end with a NFL future, says he and current Georgia defensive coordinator Mel Tucker helped him both before and during his time with the Crimson Tide.

“(Smart and Tucker are) some great coaches who want to win and they’re going to push you to the limit,” Howard said. “Everybody knows about coach Smart. I think he’s going to take that same mentality to Georgia. (In recruiting), the personality (Smart) had, he always kept it the same. Even through the recruiting process until I got to Alabama. The way he treated my family and I was always with respect. He’s that type of guy and I will always be rooting for him.”

“He was such a fired up guy. I love that from a coach,” Allen said. “That’ll probably be the biggest thing I’ll miss about him.  (But), I think he’s very ready. We’re so excited for him to go back to his alma mater and coach. He’s going to have tremendous success. I’m just glad he didn’t go to the SEC West.”

Allen also spoke on Glenn Schumann, the current linebackers coach at Georgia. Schumann wasn’t a guy highly recognized at either school, known as only a “special assistant” in many respects, however had a big role at Alabama and possessed qualities which helped players and the team as a whole improve.

“He’s probably one of the first people I met when I came down to the University of Alabama,” Allen said. “He just does a good job of being there with the players, helping them with little things. He’s definitely great and I’m excited he has the opportunity to coach.”

Eddie Jackson, Alabama’s star defensive back, focused on the knowledge he brought to the game, and how he was the go-to guy for any and all strategic concerns.

“He played a big role. Watching film – extra film – with him,” Jackson said. “When we make a mistake we come to coach Schumann because he knows every position on the field.”