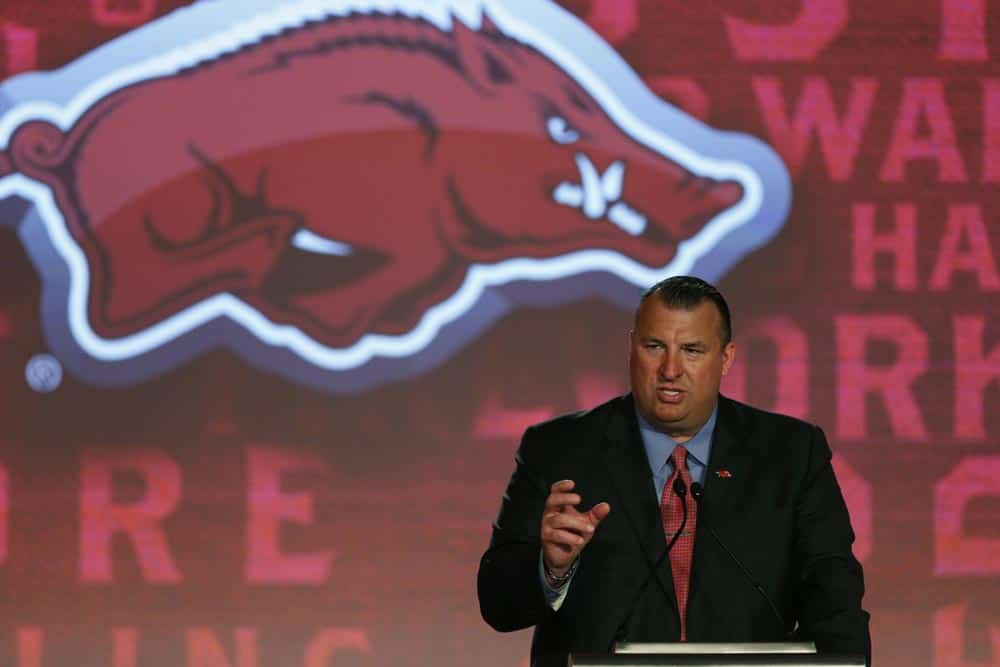 When Georgia underwent a remodel at the end of 2015 in terms of a coaching regime, new head coach Kirby Smart tried to compile the best staff he could. In December, he added Pittman, who was one of the most integral men on Bielema’s staff for the past few years, as the Razorbacks offensive line was unlike any other in both the college and professional ranks.

Bielema, needless to say, is a bit agitated at how the situation went down, and when asked during his Wednesday session at SEC Media Days about what Pittman would bring to Georgia, his response was far from definitive.

“As far as what Georgia’s getting, you’ll have to figure that out on your own,” Bielema said.

Pittman signed to a deal with Georgia with a cost of $650,000. His contract did not have a clause preventing him to head to another SEC school, and Smart was able to snatch him away.

Arkansas had to replace Pittman, and they landed Kurt Anderson from the NFL’s Buffalo Bills. When discussing what Anderson brought to his program, Bielema took advantage of the opportunity and tried to bash Pittman, saying he had more strengths than weaknesses and was lesser suited for the job than Anderson.

“The thing Sam was great in, we’ve been trying to continue those forward,” Bielema said. “The areas he might have been a little weak in – I wanted a great technician, I wanted someone to really talk about pad level – so I wanted an NFL coach. I was able to bring in Kurt Anderson who I’m very excited about.”

Razorbacks tight end Jeremy Sprinkle, who had numerous interactions with Pittman while he was at Arkansas, hinted at the peculiarity. From the unexpected decision to leave to the rallying efforts to try and get him to stay, Sprinkle says it wasn’t the most comfortable transition.

“It kind of surprised a lot of guys because we weren’t expecting it,” Sprinkle said. “And then I heard most of the linemen went to his house the night before and told him not to leave. The next day he was just gone. It was kind of weird for a while.”

Along with Pittman, Smart tried to snag Razorbacks offensive coordinator Dan Enos as well. However, his contract did include the aforementioned clause preventing that, and Bielema was happy that Georgia didn’t totally get their way.

“I stuck my tongue out, wiggled my nose and felt good about it,” Bielema said.

However, Georgia landed Jim Chaney, the predecessor to Enos in Fayetteville, because he had landed at Pitt in-between those two tenures. Therefore, there was no problem in that regard.

Sprinkle, who spent time with Chaney in 2013-2014, believes that Enos is pretty comparable, and in some regards better. Enos brought a passing yard spike in 2015, an increase of 1,042 yards. Based on the qualities described by Sprinkle, it is evident why Georgia pursued Enos primarily.

“It was a transition because most of the run game concepts stayed the same but Enos added a lot of things in the passing game that really helped us and improved our passing game,” Sprinkle said. “He’s added more things this year that’s going to improve it even more this year.”