Georgia football takes the field for another session

Georgia football takes the field for another session 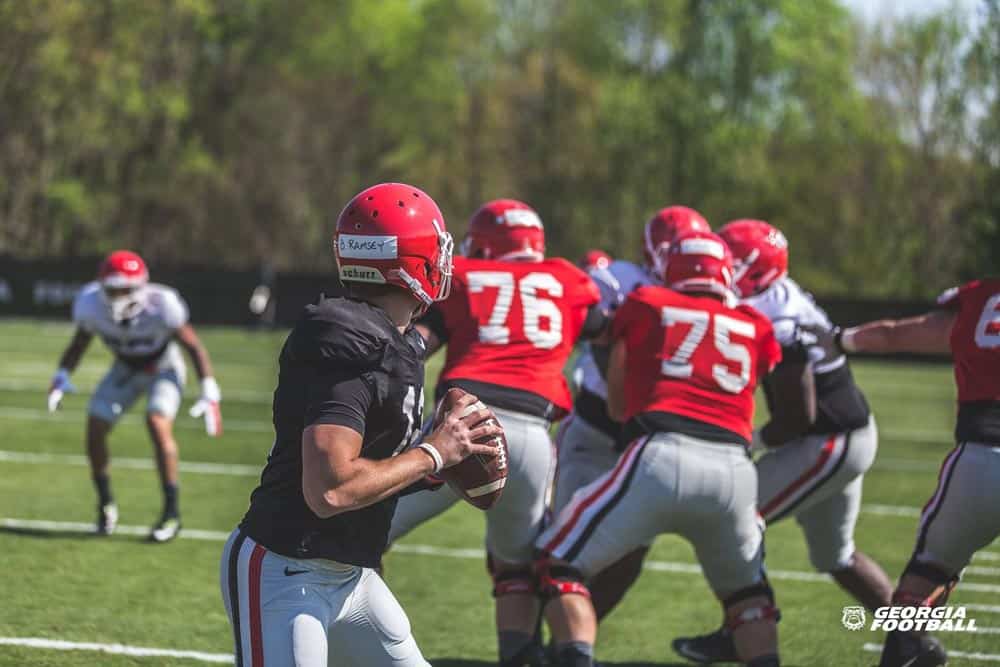 The Bulldog football team practiced for two hours under sunny skies on Tuesday at the Club Sports complex in anticipation for the annual G-Day intrasquad game on Saturday.

This marked the team’s 13th session of the spring. Georgia will take the field on Saturday at 4 p.m. in Sanford Stadium for their yearly spring game. One of the battles for the Bulldogs this spring has been at quarterback.

“I think we will have one quarterback play for both teams,” said Bulldog head coach Kirby Smart. “There is not a lot of separation between them. It’s been a see-saw battle and I think G-Day will figure in a lot in our decision.”

With running back Nick Chubb still rehabbing from his 2015 injury, Smart said that sophomore Shaquery Wilson has lined up in the backfield to help with carries.

“I didn’t think we could get through the spring and G-Day with the number of backs that we currently had,” said Smart. “I saw him split our defense once today and he has done a good job overall. It depends on the depth if he will stay in that spot.”

Smart also acknowledged on Tuesday morning that freshmen Julian Rochester and Chad Clay had been arrested the night before in Athens.

“I am extremely disappointed in them and they will suffer the consequences,” Smart said, adding both players missed practice on Tuesday as they took care of the academics they missed on Tuesday morning. “Their situation will be handled in an appropriate manner. This conduct will not be tolerated.”

Smart was not sure if Rochester and Clay would play in the G-Day game at this time.

The Bulldogs will conduct one more practice this week, on Thursday, before the G-Day game Saturday. G-Day will conclude Georgia’s spring practices. That contest will be televised nationally on ESPNU, with Dave Neal calling the play-by-play, former Georgia All-American and Academic All-American Matt Stinchcomb as color analyst and Shannon Spake handling the role as sideline reporter.