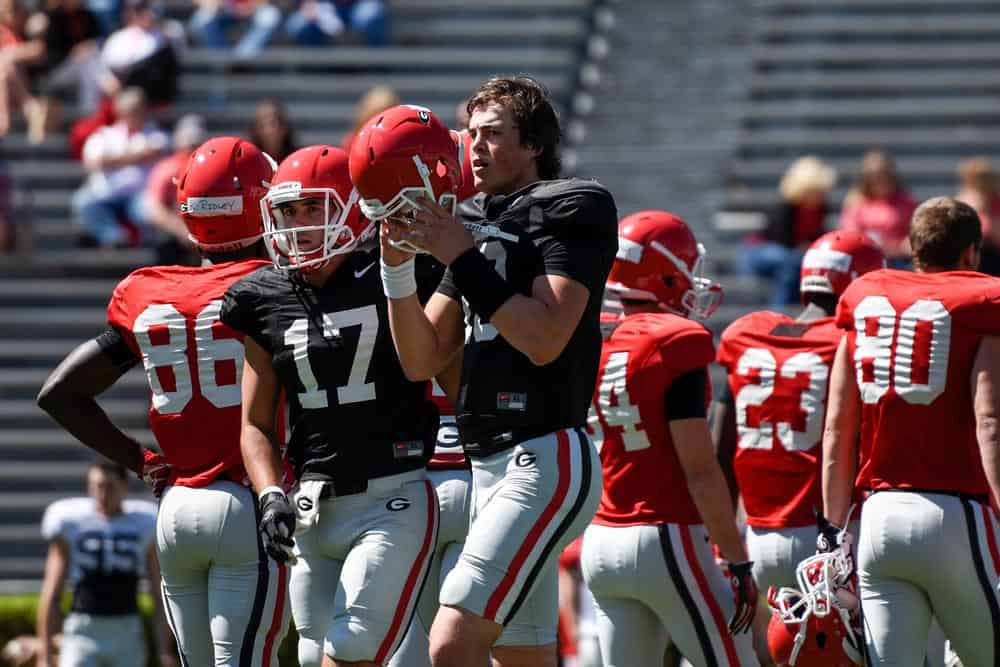 ATHENS, Ga. – The Georgia Bulldogs completed their 11th practice of the spring session with a 2 1/2-hour workout this afternoon, conducted at the UGA Club Sports complex.

The practice followed the form of most Georgia workouts thus far this spring. Bulldog coaches have spent much time implementing their new system. ‘’There’s definitely been an emphasis this spring on the big picture,’’ said veteran tight end Jeb Blazevich. ‘’I feel like in every good coach that’s an emphasis. It’s not the first time we’ve heard it, but it’s definitely helpful when you start off a meeting by saying, ‘I don’t care about yesterday. I don’t care about tomorrow. I only care about TO-DAY.’ It helps you get into the proper mindset to get something accomplished for that particular day.’’

For senior safety Quincy Mauger, the transition of coaches takes on additional significance. He plays the same position that new head coach Kirby Smart played as a collegian at UGA. As a result, Mauger sees a little more of Smart during practice than perhaps most other Bulldogs.

‘’He (Smart) is a very hands-on kind of coach,’’ he said. ‘’He’s thrown with the safeties a couple times, he works with the entire defense, special teams, you name it. He’s really shown a high level of interest in all phases of the game. Right now, he’s just helping us focus on reading our keys and trying to play faster.’’

Practice #12 for the Bulldogs will take place on Saturday in the form of their second full-scale scrimmage of the spring at Sanford Stadium.

Georgia’s spring drills will culminate with the G-Day intrasquad game on Saturday, April 16 at 4 p.m. That contest will be televised nationally on ESPNU, with Dave Neal calling the play-by-play, former Georgia All-American and Academic All-American Matt Stinchcomb serving as color analyst and Shannon Spake handling the role as sideline reporter.