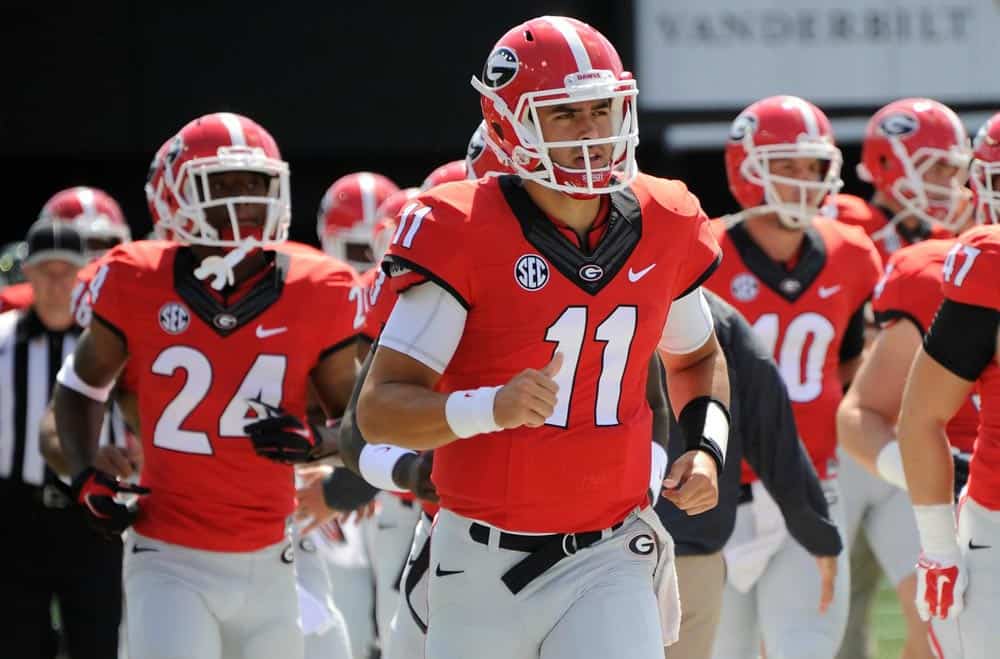 Georgia’s spring practice regimen begins in seven short days and the buzz is validated by the potential for the 2016 season. Early enrollee Jacob Eason is assumed the position, however he must earn his spot being the “young pup” on campus.

Last season, Georgia was forced to start a transfer from Virginia in Greyson Lambert. Let’s be politically correct here and say his tenure has been sub-par to this point. Lambert totaled 1,959 yards with 12 touchdowns and 2 interceptions in 12 starts.

Those statistics may seem sufficient due to the low interception total, however let’s put those totals into some perspective. The last Georgia quarterback to have considerable success was Aaron Murray, who was behind center from 2010-2013. Murray totaled over 3,000 yards in each of his four seasons, and his lowest touchdown total being double that of Lambert’s at 24.

This perspective shows how impactful the fiasco at quarterback was last season. A plan was put into action to improve the all-important position, as Georgia reeled in five-star and the nation’s No. 2 overall rated quarterback, the previously mentioned Jacob Eason.

The acquisition of the west coast gunslinger is in order to vastly improve production and hopefully play a role in increasing the win total. With that said, the mention of Eason starting from day one is very relevant, based on what he brings to the table. However, Kirby Smart disagrees, saying he has to compete with Lambert and Ramsey, as they’ll be given the same opportunities.

“Everybody’s expectation is he’s going to start, he’s going to be the savior,” Smart said during a radio interview with Atlanta’s 680 The Fan back in February. “We got two quarterbacks on our team competing for a job. He’s the third guy coming in to compete for the job.”

To put this simply, Smart believes that a fair competition is necessary as Lambert and Ramsey are on scholarship for a reason, and a true freshmen shouldn’t jump into the position immediately over two players who have obtained experience.

A topic of conversation around the quarterback position has been the pressure surrounding Jacob Eason, due to his expectation of being the starter in the Georgia Dome on September 3rd. Smart has diverted the aspect of pressure from Eason to himself. “If we don’t win it’s my fault. Why should Jacob have pressure on him? He’s a true freshman.”

Smart’s claim was that very seldom do true freshmen start at such a demanding position as quarterback in an upper-echelon conference, and a player who hasn’t played a true snap shouldn’t have expectations of such magnitude.

The quarterback battle is certainly of high priority, and will be closely followed as spring practice gets underway. More clarity on the roles of Greyson Lambert, Brice Ramsey, and Jacob Eason will be present after on-field play has progressed.