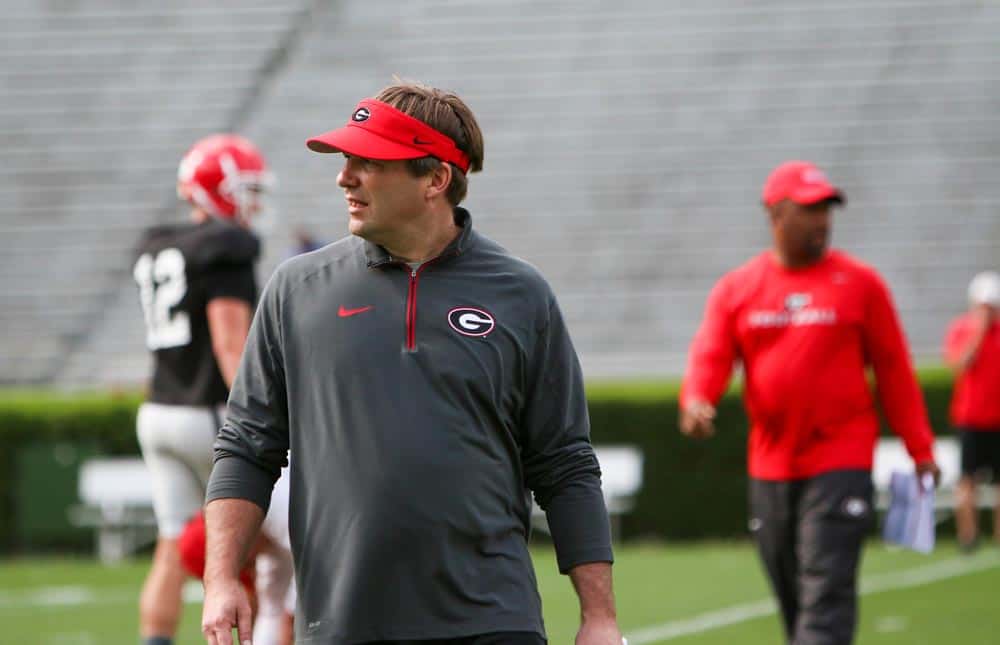 Kirby Smart had hopes of allowing A.J. Turman to transfer and for everything to run smoothly. That is not the case as the national media has scolded the new head coach for his restricting policy.

It had been reported that junior running back A.J. Turman had been granted a release from the program last week after not having a single carry during his time at Georgia. However, what had not been known at the time is that Smart had restricted the transfer, not allowing Turman to enroll at Miami (FL) with former Georgia head coach Mark Richt, at Georgia Tech or at any SEC school.

In previous years, Mark Richt and UGA athletic director Greg McGarity had an open policy on transfers, saying that the player should have a freedom to select an institution of choice. That stance has now changed as Smart and McGarity have agreed to adjust the school’s policy.

“We are not totally restricting transfer opportunities for our student-athletes,” Greg McGarity told the AJC’s DawgNation. “We will take each request on its own merit to determine if any restrictions should be placed on the release due to any extenuating circumstances. Kirby brought me up to date on this when we were discussing our stance, and so that stance has been adjusted.”

McGarity’s quick change in stance leads many to believe that Smart has a “large voice in the room” on adjustments made within the program. Smart believes that his new policy on transfers will be beneficial for the long-term success of the individual and the program as a whole.

“I wanted to set the precedent for the future that kids would not be able to go to Miami right away,” Smart told reporters at a press conference earlier in the week. “It’s very important that we understand that, and that’s pretty much standard operating procedure when a coach leaves one place, that a kid can’t go there with the coach. That’s important to me that people understand that.”

However, the comments made by Turman and Smart on how the terms were agreed upon was not taken lightly by others.

Wednesday morning on the ESPN Radio show Mike & Mike, co-host Mike Greenberg scolded the new Georgia coach for his strict barriers placed on Turman’s freedom of transferring to any school of choice.

“You’re scared of some 19-year-old kid going someplace, a guard who’s obviously barely playing for you and that’s why he wants to transfer in the first place or has whatever other reason to go someplace else,” Greenberg said midway through the show. “And you’re so terrified to allow him to go to someone you play on your schedule? Shame on you.”

Greenberg’s partner, Mike Golic, mimicked the notion, saying that Smart “looks bad” in the grand scheme of the situation.

Personally, I believe the blame placed on Smart is truly unjustified due to the fact that many other programs have placed similar restrictions on players.

Bruce Feldman of FOX Sports reported in 2015 limitations placed on the transfer of former Notre Dame quarterback Everett Golson, as he couldn’t attend any school on Notre Dame’s schedule that season. Rather than setting a precedent for the future, that seems more disgraceful and trying to gain more of a competitive advantage than the restrictions placed by Georgia.

There wasn’t a lot of backlash on Brian Kelly for Golson’s transfer, and Smart gets heavily blamed for doing something very similar.

One thing that is vastly agreed upon by many of those in the media is the need for uniformity from the NCAA on this issue. The transfer policies shouldn’t vary based on the policy of an institution. Mike Emmert and those in charge of implementing rules for the NCAA should organize a protocol for the limitations to be placed on transfers, if any. It should then be enforced and each school should be mandated to follow the set protocol.