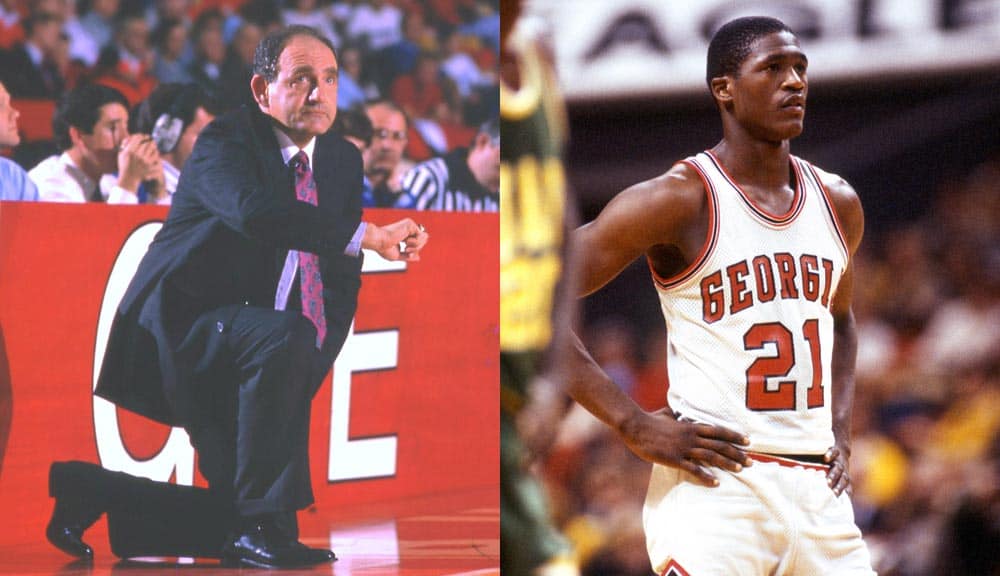 Georgia’s Hugh Durham and Dominique Wilkins both have been elected into the National Collegiate Basketball Hall of Fame. The Hall of Fame’s Class of 2016 was announced Tuesday and featured six players and two coaches. Enshrinement ceremonies will be held on Friday, November 18 at the Arvest Bank Theatre at the Midland in Kansas City, Missouri.

“I am so excited for both Coach Durham and Dominique on the announcement of their induction into the Collegiate Basketball Hall of Fame,” Georgia head coach Mark Fox said. “It is very meaningful as we work to enrich our tradition, that those who came before us are recognized for their accomplishments. They both have been great assets to me as we rebuilt our program. We are so proud that everyone will now be able to recognize their greatness and their contributions in the college hall of fame.”

Durham is Georgia Basketball’s winningest coach, leading the Bulldogs to 297 victories. He also led Georgia to the Final Four in its first-ever NCAA Tournament appearance in 1983. The Bulldogs were the “other Cinderella” of the 1983 NCAAs, defeating St. John’s and North Carolina to win the East Regional before falling to eventual champion N.C. State in the semifinals in Albuquerque. Prior to Durham’s arrival, Georgia had never received a postseason bid of any kind. The Bulldogs reached postseason play 11 times during his 17 seasons. In addition to the Final Four bid, Georgia reached the semifinals of the 1982 NIT. Durham was named SEC Coach of the Year three times, 1985 (coaches), 1987 (AP) and 1990 (consensus). He led the Bulldogs to both their first SEC Tournament title in 1983 and their first SEC Championship in 1990.

“When you’ve been in the profession as long as I have been and for someone to think deserve this type of recognition makes you excited, but it also humbles you,” Durham said. “After you get past that, you start thinking about all the people who enabled you to do this. I’m talking about the players, assistant coaches and the administrators. At least for me, that’s where most of my thoughts have been – all the relationships – because that’s really why coaches have the opportunity to be considered successful.”

All told, Durham posted 633 career victories in 37 seasons, with 230 at Florida State from 1967-78, 297 at Georgia from 1979-95 and 106 at Jacksonville from 1998-2005. He also led Florida State to an NCAA runner-up finish in 1972. Durham is the only coach in Division I history to take two schools to their only Final Four appearance and one of 12 to take reach the Final Four at two schools. He is one of just 10 coaches with 200 wins at two Division I schools and the only one to be the winningest coach at three programs.

Known as the “Human Highlight Film,” Dominique Wilkins arrived at Georgia in the fall of 1979 and helped take the Bulldogs to new heights. He led UGA to its first postseason bid of any kind with a bid to the 1981 NIT and returned to reach the 1982 NIT semifinals. In 1981, Wilkins was named SEC Player of the Year by the Associated Press and United Press International and Most Valuable Player of the SEC Tournament. He also earned All-America recognition from The Sporting News (second-team), Basketball Weekly (third-team) and the Helms Foundation. In 1982, he was a consensus All-America selection, including first-ream honors from Converse, Basketball Times, the John R. Wooden Award, Basketball Weekly and the Newspaper Enterprise Association.

Wilkins, who was inducted into the Naismith Memorial Basketball Hall of Fame in 2006, left Georgia following three seasons to enter the NBA Draft. He was then Georgia’s career scoring leader with 1,688 points and remains No. 4 among the Bulldogs’ top all-time scorers. Wilkins was the No. 3 overall pick in the 1982 NBA Draft and played the majority of his 15 seasons with the Atlanta Hawks. Wilkins won the NBA scoring title in 1986 (30.3 ppg) and was a nine-time All-Star and seven-time All-NBA selection.

“This is a huge honor for me, and one that makes me feel cherished and honored,” Wilkins said.”I feel proud to have left a mark as a college player and am thrilled to be a part of this class. I truly appreciate the recognition as a basketball player and as a person.”

The National Collegiate Basketball of Fame is located in the College Basketball Experience (CBE), a world-class experiential entertainment facility adjacent to Kansas City’s Sprint Center. The Class of 2016 is the 11th in the hall of fame’s history. Durham and Wilkins represent Georgia’s first inductees.

“It’s meaningful because Dominique had so much to do with establishing Georgia Basketball,” Durham said. “When I spoke earlier about the relationships, Dominique is one that came to mind. I’m really excited to have the opportunity to be inducted with him. I know we’re all really excited about that. It’s a well deserved honor. I’m happy for Dominique, and I’m happy for the University of Georgia.”

“Hugh Durham is like a father to me to this day,” Wilkins said. “He’s a major part of my life, and a man I will always respect. To go into the College Basketball Hall of Fame with your coach is mind-blowing. I’m happy for him and also happy we will have an opportunity to reconnect and celebrate together.”

“We are starting our second decade of inductions with another outstanding class,” said Reggie Minton, deputy executive director of the National Association of Basketball Coaches (NABC) and chair of the Hall of Fame selection panel. “The men selected as players include some great all-around athletes who helped lead their teams to championships in the NCAA, Olympic Games and the NBA. The two coaches in this year’s class both established tremendous success and helped define the benchmark in our profession.”

The Sprint Center will serve as the venue for the annual CBE Hall of Fame Classic. Georgia will participate in the four-team tournament at the end of the enshrinement weekend on Monday, November 21 and Tuesday, November 22.