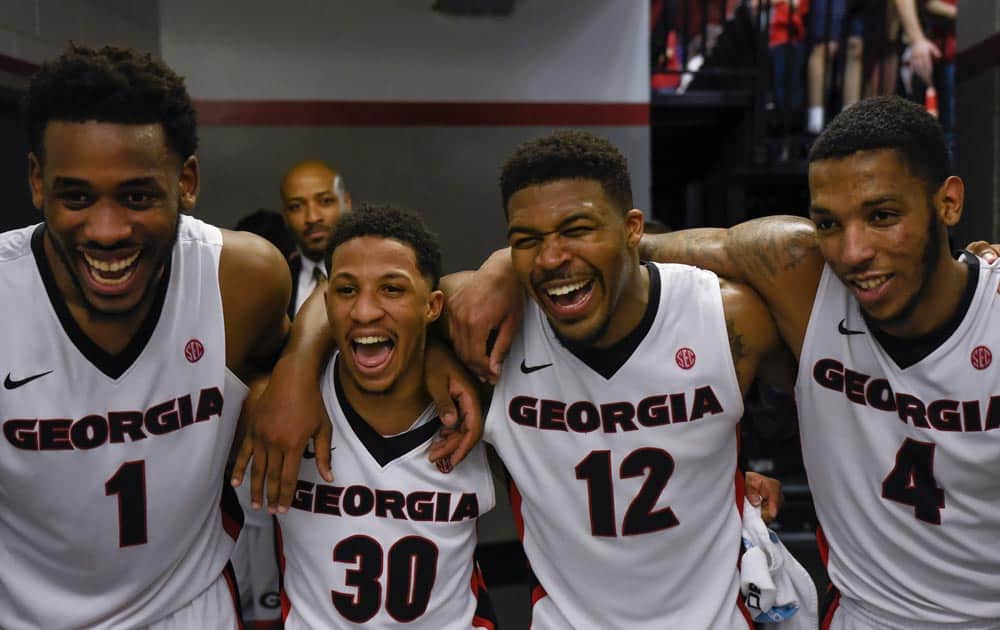 Behind an impressive defensive performance the Georgia men’s basketball team downed No. 25 South Carolina, 69-56, Tuesday night at Stegeman Coliseum. This marked the Bulldog’s first win against a ranked opponent since they defeated No. 21 Missouri on Jan. 8, 2014.

Senior guard Charles Mann became UGA’s all-time leader in career free-throws made. The Alpharetta, Georgia native currently has 551 makes from the charity stripe in his career, including a 4-6 performance tonight.

The Bulldogs jumped out to a quick six-point lead after Charles Mann and Kenny Gaines hit three-point baskets on Georgia’s first two possessions. The Gamecocks slowly crawled back before eventually grabbing its first lead at the 14:29 mark. The Bulldogs responded with a 9-2 run that would give them the lead for the remainder of the half. Georgia’s defense gave South Carolina fits for the entire first period. The Gamecocks were held to a season-low 21.4-percent shooting for the half as Georgia took a 33-23 lead into the break.

Georgia came out of the locker rooms firing with a three-pointer by J.J. Frazier, but the Gamecocks wouldn’t be denied bringing the score within four with 12:51 left in the contest. The Bulldogs had an answer down the stretch knocking down several big baskets including several three-pointers from Frazier, who scored all of his 13 points in the second half. UGA defense held strong during the final ten minutes suffocating any offense the Gamecocks had to offer, eventually taking a commanding lead in the final few minutes. Georgia knocked down its free throws late to win the game, 69-56.

The Bulldogs return to action on Saturday hosting the Auburn Tigers at 5:30 in Stegeman Coliseum. The game will be broadcast on the SEC Network.

• No. 25/23 South Carolina was just the seventh ranked team to play at Stegeman Coliseum since the start of the 2011-12 season. The win was Georgia’s first at home over a ranked opponent since beating No. 12 Florida 76-62 on Feb. 25, 2012.
• With a balanced attack on offense, six bulldogs combined to score in the home team’s first 21 points. Only Yante Maten and Charles Mann had multiple field goals in the first 10 minutes of play.
• The Bulldogs’ 33-23 halftime lead represented just the fifth time this season that the Gamecocks trailed at the intermission. The 10-point deficit was South Carolina’s second-largest on the year.
• With six free throws in the contest, Charles Mann overtook Alec Kessler for the most free throws made in Georgia basketball history (551).
• The victory over South Carolina snapped a losing streak of nine games against ranked opponents.
• The Bulldogs improved to 4-1 at home in conference play, with the lone loss coming to No. 8 Texas A&M.
• Georgia became just the third team to have four players reach double-digit scoring against South Carolina this season.
• Georgia’s 13-point win represented South Carolina’s second-largest margin of defeat this season.
• The Bulldogs became just the third team to out-rebound the Gamecocks on the year. USC entered tonight’s action 1-1 when losing the battle of the boards.

On tonight’s game…
“That was a hard fought game and we beat a terrific basketball team. We beat a team that I vote every week in the top 25, and a team that I’ll vote in the top 25 next week, because I think they’re terrific. It’s a really good win for our players and our team. We had a great crowd, that helped us, and we leave here with a good feeling.”

On the play of J.J. Frazier…
“Competition makes him better. He’s a terrific shooter, but he loves to compete. He’s a gamer. He loves to compete. When the scoreboard’s on, and the games are tight, he just gets better, and he makes plays. That’s an unbelievable trait to have for a player.”

On big win…
“Tonight feels great. South Carolina is a great team. They are ranked for a reason. For us to come out and play as well as we did, it was a blessing. I was tired but thankful that we brought the energy and the crowd gave us a boost, as well. It was overall a fulfilling sensation.”

On Charles Mann becoming the all-time free throw record holder at UGA…
“I had no idea he would set Georgia’s career record when I first met him. I’m proud of him for it.”

On end of game performance…
“My teammates look to me to lead. I didn’t shoot well tonight and I didn’t have a rhythm and I didn’t play much because of foul trouble. I was frustrated watching those guys play as hard as they could when I really couldn’t do anything about it. At the end of this game, I really just wanted to take some pressure off of them and make some plays for them, as well as myself and that’s what happened.”

On falling over South Carolina bench…
“Initially, when I first crashed over, I was just trying to get back in. The shortcut that’s in our bench was cut off because of chairs, so I had to take the long way around and run all the way to the end of the bench and back. I just wanted to get back on the court as soon as possible because it was five on four against a top-20 defense. I just didn’t want to give my team a disadvantage for too long and the three at the end was just a nice ending.”

On tonight’s game…
“I’m disappointed. I thought defensively we tried, but you can’t go on the road and shoot 31 percent in league play and expect to win. Once again, get out-rebounded, get out-shot at the free-throw line, hard for us to win if we don’t do those two things. We got nothing from our bigs. Our bigs gave us absolutely nothing.”

On Georgia’s zone defense…
“Their zone was good. He’s been playing it a lot lately and we knew they were going zone more than man today because that is kind of the way they have shifted as the season has gone on. It wasn’t a problem in the second half, they had to come out of their zone in the second half, but then we were inept in the last five minutes on offense. But in the first half, on offense I don’t know how to explain it.”