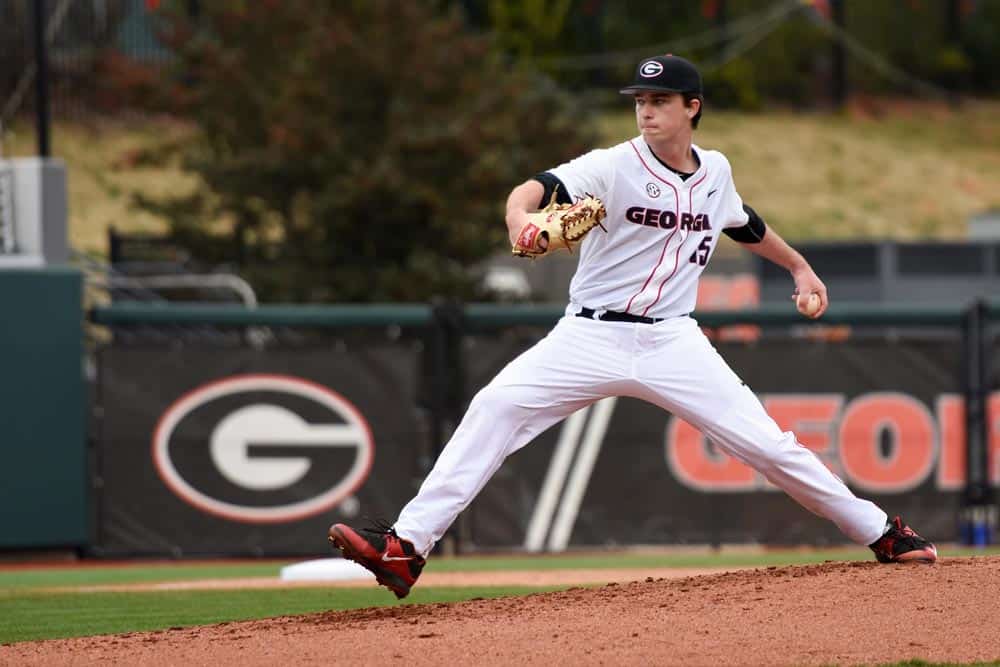 Freshman pitcher Kevin Smith (1-0) tossed seven innings of one-run ball to lead Georgia (2-1) to a 5-1 victory and a series win over Georgia Southern (1-2) on Sunday at Foley Field.

The Bulldogs struck first in the fourth inning on an RBI fielder’s choice for freshman LJ Talley, his first career RBI. The Eagles evened the score at 1-all in the top of the fifth on an error, but Georgia responded in a big way in the bottom half. The Bulldogs sent eight batters to the plate and scored four runs, all with two outs, to open up a 5-1 lead. Sophomore Keegan McGovern launched a double off the center field wall to score two runs, while the other two runs came via a misjudged fly ball to right field off the bat of freshman Michael Curry.

Smith’s impressive debut came at the expense of the Georgia Southern lineup, which struck out seven times and managed only two hits on the lefty in seven innings pitched.

Georgia Southern’s Hunter Phillips (0-1), one of six pitchers utilized by the Eagles, was charged with the loss after surrendering two earned runs on one hit in two-thirds of an inning.

– Kevin Smith provided Georgia with a big start in his collegiate debut. The freshman went 7.0 innings while allowing only one run (unearned) on two hits, two walks and seven strikeouts.
– Keegan McGovern finished Sunday 3-4 with two doubles, two RBIs and two runs scored, capping an impressive opening weekend. The sophomore finished the series 5-12 at the plate with a home run, two doubles, and four RBIs.
– In the Bulldogs’ big fifth inning, Nick King started a streak of four straight Georgia batters (Weber, McGovern, Nichols) to come around to score.
– Georgia starting pitchers (Tyler, Holder and Smith) combined to throw for 18.2 innings on the weekend. The Bulldog starters only allowed three earned runs and seven hits in three games.
– Georgia freshmen combined to pitch the entire game for the Bulldogs, each in his respective debut. After Smith went seven innings, Shane Tucker worked 1.1 innings of scoreless ball without allowing a hit. Adam Goodman earned the final two outs in the ninth without allowing a baserunner.

On the importance of today’s win…
“I think the biggest thing is overcoming adversity. We had some adversity, with that tough loss yesterday, and we could have hung our heads and felt sorry for ourselves, but we didn’t. We came out, we battled, and we fought hard. They’re a very good team with a very good pitching staff, and our guys overcame it. They got some big hits, and Kevin Smith came up huge for us.”

On Kevin Smith’s first start…
“Well, Connor Jones was ill. He couldn’t pitch. So we had to make the move. Kevin was going to throw against Mercer on Tuesday, but as soon as Connor came down with an illness, we had to make a move. It was an obvious move for us, and you see why. That’s what he’s done against our hitters in intra-squad since he got here. He’s very good, very talented, and only a freshman. [There’s] reason to be very encouraged.”

On what impressed him most about his team’s performance…
“I think that we played nine freshman the whole weekend. Nine freshmen went out there, competed, and did a great job. I’m really proud of the young guys, but we’ve still got some great leadership. Nick King has really taken over as a leader on this team. He’s really vocal, and that’s something last year that as a first year guy he didn’t feel comfortable doing. He said from day one, he goes, ‘Coach, I’m going to be a leader on this team.” He never shuts up, and that’s a good thing. He’s always talking, always helping guys out. I’m really impressed with the upper classmen and the way they’ve helped these freshmen come along.”

On getting a win and a series win…
“It felt good. I know a lot of people on the other team, so it felt good to get a victory today.”

On what he’s most impressed with from his teammates…
“How we work together. We battled all offseason together, and we knew we needed to be a team to get this victory.”

On the preparation for the opening weekend…
“It’s just the hours, hitting in the cage, trying to look for every situation that could come in the games. We’re just trying to get everything smooth for the regular season.”

On winning the first series…
“It’s huge for us to get the ball rolling and we have a couple of games this week, so we’ll get back to practice this week.”

Georgia will host the Bulldog Invitational next weekend. The Bulldogs will face South Alabama at 5 p.m. on Friday, Cincinnati at 4 p.m. on Saturday and Western Kentucky at 3 p.m. on Sunday at Foley Field.