Bulldogs shut down Auburn at home

Bulldogs shut down Auburn at home 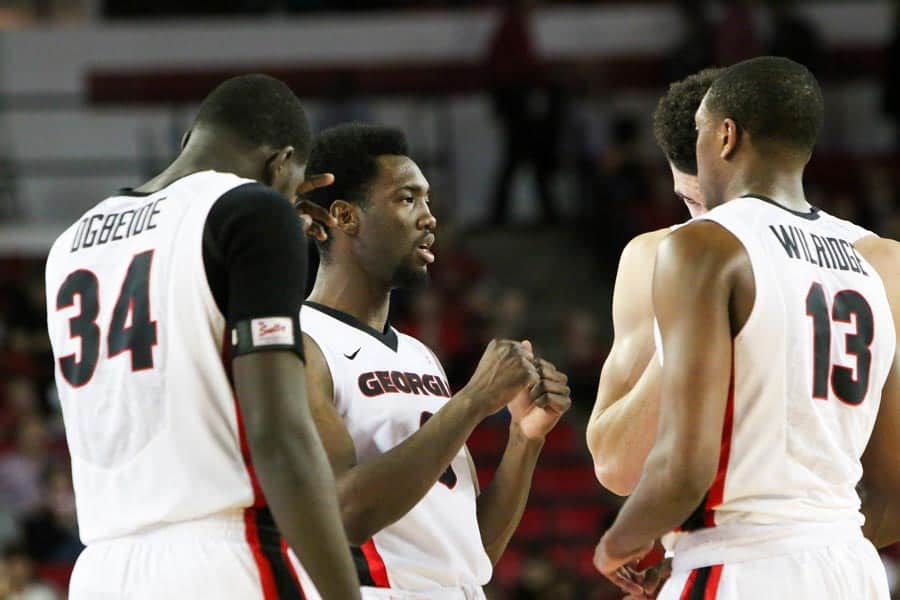 Three different Bulldogs had double-digit scoring outputs. UGA was led by J.J. Frazier with 16 points, followed by Charles Mann and Yante Maten with 12 points each. Maten led the team with 12 rebounds for his fifth double-double of the season.

“That was a typical SEC game,” head coach Mark Fox said. “It was hard fought. We were able to establish a double-figure lead. There wasn’t a lot of rhythm to the game, obviously Auburn played a little shorthanded today. I don’t think either team had any rhythm in the first half. Both teams played hard and we were fortunate enough to build a little lead in the second half and win the game.

The Tigers were first on the scoreboard hitting an early free throw, but Georgia quickly responded with a tip in from Derek Ogbeide taking a 2-1 lead at the 16:36 mark, a lead that they wouldn’t surrender for the remainder of the game. Georgia poured it on offensively while shutting the Tigers down on the defensive end. Auburn was held to just 25.9-percent shooting from the field in the first half. The Bulldogs extended their lead to double digits several times throughout the half before taking a 31-22 advantage into the break.

Georgia picked up right where it left off to begin the second half going on a 18-5 run to start the period. The Bulldogs were all over the Tigers again on the defensive end. Georgia held Auburn to just one field goal in the first 11 minutes of action in the second period. The Bulldogs held off everything the Tigers had to offer for the entirety of the contest, ultimately winning 65-55.

The Bulldogs hit the road on Tuesday night to Lexington, Kentucky to take on the No. 20 Kentucky Wildcats. The game is set to tip at 9 p.m. ET on ESPN.

• The .259 field goal percentage for Auburn was both the lowest allowed by Georgia on the year and the lowest by Auburn on the offensive end this season.
• Auburn’s 22 first-half points tied the lowest allowed in the opening 20 minutes by the Bulldogs, set against Missouri (at Mizzou) and at home against High Point.
• After Auburn’s first field goal of the second half, Georgia forced the Tigers into a 0-for-18 slump as the Bulldogs pulled away.
• Yante Maten recorded his fifth double-double of the season and sixth of his career.
• Georgia took home the victory despite making only two 3’s in the contest.
• Kenny Paul Geno tied a career high with seven rebounds.
• Georgia outscored Auburn 14-4 on the fast break, 10-4 on second-chance points and 34-18 in the paint.
• Charles Mann’s 12 points moved him past Bob Healey and Eric Marbury to 19th all-time in scoring at Georgia.
• Kenny Gaines’ seven points ties him with Jerry Waller for 26th all-time in scoring at Georgia.
• Maten now has nine blocks in his last two games (4 vs. SC, 5 vs. Auburn), giving him his best two-game stretch in blocks.
• J.J. Frazier now has double-digit points in six consecutive games, matching the longest such streak of his career (Jan. 14, 2015 to Jan. 31, 2015).

On tonight’s game…
“Typical SEC game that was hard fought. We were able to establish a double-figure lead. There wasn’t a lot of rhythm to the game, obviously, Auburn playing a little shorthanded today. I didn’t think either team had any rhythm in the first half. But both teams played hard, and we were fortunate to build a little lead there in the second half and win the game.”

On Georgia’s ability to win despite not being at its best…
“I think that our defense was consistent today. I won’t say it was great, but it was consistently solid. I didn’t think that we practiced very well yesterday, and I thought some guys played like they practiced. That’s taking nothing away from Auburn because I thought with the circumstances, they did a great job. But it’s good to get a double-figure win, even when you don’t play as well as you hoped to play.”

On getting a rivalry win…
“Any game that you play and you win, that’s a good night. Beating Auburn was nice but we are going to enjoy this win tonight then get ready for the next one.”

On overall performance…
“We didn’t play well. They forced us to play methodically and somewhat erratically. We’ll play them again in a few weeks. They are a really good team and they were just missing one of their key guys. We know they are a good team.”

On winning by double digits…
“We don’t want to play poorly but when you can claw and grind it out and get a win, it’s good. No matter what, a win is a win and we are just excited about that.”

On the cold offensive start…
“That was just a missing open shots issue. I mean somebody has to step up. I thought we all stepped up and played hard, and I’m very proud of our kids for doing that, there’s no question. And the fact that we didn’t quit, we represented Auburn, but ok, here’s your chance, step up and make shots in a big game and we didn’t.”