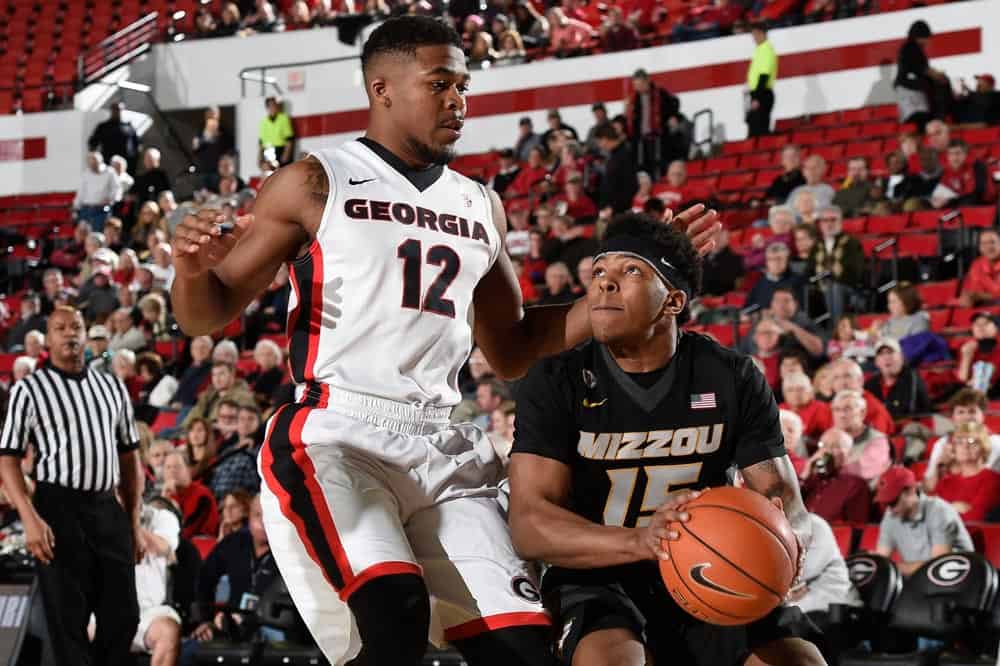 The Georgia men’s basketball team (8-4, 1-1) downed the Missouri Tigers (7-7, 0-1), 77-59, Wednesday night at Stegeman Coliseum shooting a season high 54.7-percent from the floor to earn its first Southeastern Conference victory of the season.

With the win the Bulldogs and Tigers are now 4-4 all time, however Georgia owns a 3-1 edge in games played at Stegeman Coliseum.

“We certainly started the game very well,” head coach Mark Fox said. “I thought that we had a good focus about us. We played well at both ends to start the game. We certainly played very well on the defensive end to start the second half. It was good to play from in front.”

Georgia raced out of the gates to a 10-0 lead just 3:39 into the first half. After starting the game with three point baskets from Frazier and Kenny Gaines it was all Maten for the next several minutes. The sophomore scored 11 consecutive points for the Bulldogs over the course of the next five minutes. The Tigers closed the gap with a couple three pointers of their own to bring the score to 24-18 at the 8-minute media timeout. Georgia responded scoring an additional 21 points in the final seven minutes to score a season-high 45 points in the first half for a 45-32 lead at the break

The Bulldogs forced the Tigers to miss their first 11 field goal attempts of the second period. UGA’s defense never allowed Mizzou any comfort in its offensive sets, holding the Tigers without an offensive field goal for the first 7:22 of the second half. The Bulldogs continued to hold their own on the defensive end, holding Mizzou to a mere 23.1-percent shooting on the half. UGA spread out the wealth on the offensive end with eight different Bulldogs scoring in the period. Georgia never trailed at any point during the contest.

The Bulldogs head to Oxford, Mississippi on Saturday, January 9 to take on Ole Miss at 8:30 p.m. ET. The game will be televised on the SEC Network.

Georgia drew even with Missouri all-time with four wins each, and the Bulldogs have now won the last four in the series. The Bulldogs lead the Tigers 3-1 at Stegeman Coliseum.
• Georgia’s .547 shooting mark was the best this season.
• The Bulldogs had four double-digit scorers for the third time this season.
• With three free throw attempts in the contest, Charles Mann is now tied for the most career free throw attempts at Georgia alongside Litterial Green (748), and he is 31 makes away from the most free throws made by a Bulldog (held by Alec Kessler).
• The Bulldogs jumped out to a 10-0 lead in the early running, its best start to a game since leading Florida 12-0 on Jan. 17, 2015.
• J.J. Frazier’s shot-clock-beating 3 at 6:22 of the first half was his 100th career longball.
• Georgia’s 57.1-percent shooting clip in the first half was the best for any half against Mizzou this season.
• The 23.1-percent shooting mark from Mizzou in the second half was the second-lowest for a Georgia opponent this season (21.9 percent by Clemson, 1st half).
• The Bulldogs’ .547 field goal percentage was the second-best against Missouri on the year, trailing only No. 9 Arizona (.564).
• Georgia’s 11 3’s tied the most for the Bulldogs under head coach Mark Fox (five times previously).

On tonight’s game…
“Certainly a good win for our team. I thought we played pretty complete basketball tonight. We were good on the offensive end, executing, helping each other, sharing the ball.

Defensively, we were really strong for much for the game, so we were able to play from in front. Missouri has a young team, and we certainly had great respect for them coming in, and that kept us sharp out of the gate.”

On the play of Gaines, Frazier, Mann, and Maten….
“We’d love for all four of those guys to score every night. That’s certainly ideal, but it’s not going to happen every night. We know that our bench is made up of mostly freshmen, one of whom who missed a month of the season, and it’s going to take some time for those guys to become consistently productive. So it’s important for those other guys to play well, and tonight, they did that.”

On defensive success…
“We’ve just been trying to play hard since we let that last one go in Florida. We wanted to get back to the way we play defense and that way tends to win games for us.”

On the free-throw attempts record…
“That’s pretty cool. That’s not going to make my year but I”m excited to be in Georgia basketball history forever. My game is just trying to get to the free-throw line and try to impact the game in different ways.”

On shots taken…
“I’m really comfortable because we run the plays so much. I know where I can get my shot from and the more we practice our plays, the easier it becomes. We scrimmage against each other during practice and I see what works against (Mike Edwards) and (Derek Ogbeide) so I can see how that works in the game.”

On tonight’s performance…
“It was disheartening that we worked on defending the exact same play that they ran for three days and they scored. We didn’t do what we were supposed to do. At one point they scored and we are down 6-0. They get a rebound and then they are up 8-0 just like that. That’s hard against a good team, especially on the road. I thought we had some looks early and we couldn’t hit them. As I was looking over the box score, I saw that we missed 13 close shots in the second half. That can’t happen. We’ve got to get bigger and stronger.”

On the overall scoring…
“You know, our bigs got in foul trouble early on. But I was proud of Kevin (Puryear) and I was proud of Jakeenan (Gant). They both played hard. As a whole, we can’t spite good teams. Georgia made shots tonight—were we not guarding them or did they make tough shots? I think it was a little bit of both (J.J.) Frazier nailed a three near me earlier on and he was guarded. When a team gets rolling like that and tough shots begin to fall, it’s tough.”

On his matchup with Yante Maten…
“He did [have control early on]. He’s a very good finisher with both hands. It seemed like he slowed down in the second half. I tried to do everything I could to slow him down and I think I did a decent job of that. Like I said, we just have to get better from this experience.”