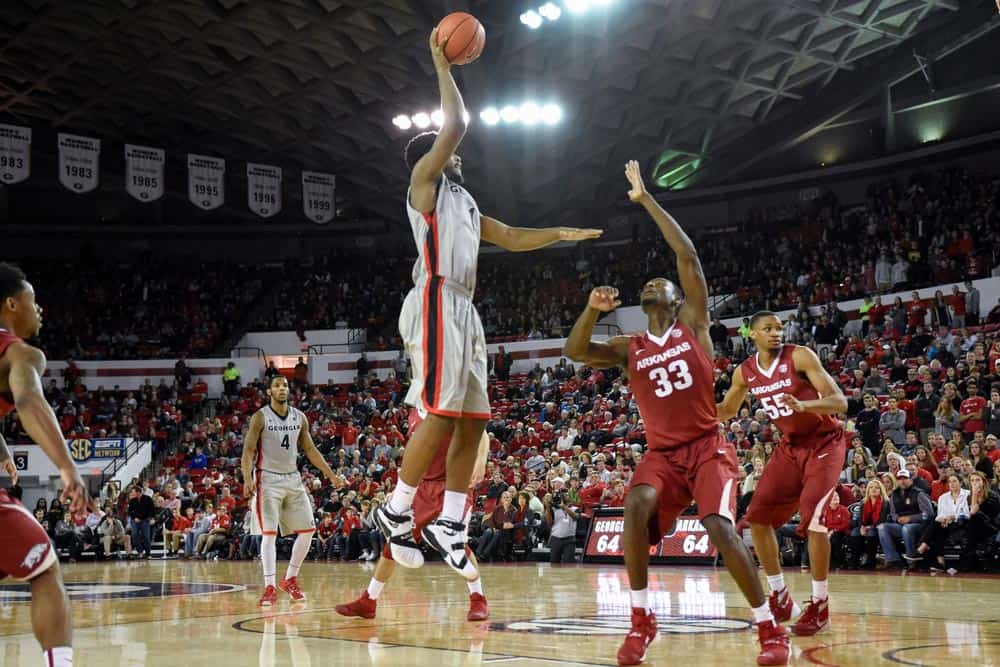 J.J. Frazier topped the 20-point barrier for the fifth time this season, pouring in 26 points in the Georgia men’s basketball team’s 76-73 overtime victory against the Arkansas Razorbacks Saturday night in front of a raucous crowd in Stegeman Coliseum.

Frazier led all scorers with 26 points, followed by Yante Maten, who recorded his fourth double-double of the season with 17 points and 12 rebounds and Kenny Gaines with 16 points.

“That was certainly a very hard-fought SEC game,” head coach Mark Fox said. “We feel fortunate to beat a very good Arkansas team. I thought they played really hard and it was a battle. We are fortunate to win the game against a team that we have great respect for. We didn’t shoot free throws well and could have made it easier in the end than we did, but we still leave here with the result we wanted.”

The Razorbacks jumped out to a quick eight-point lead, but Georgia responded with an 11-2 run themselves. The first half featured several lead changes as neither team could find any separation. The Bulldogs grabbed most of the game’s momentum heading into the break riding an 11-3 run. Frazier led all scorers in the half with 12 points including three baskets from behind the arc. Georgia was everywhere on the defensive end holding the Razorbacks to just 32.1-percent shooting from the field in the first half.

Georgia had a strong opening to the second half, extending its lead to as large as eight points with 12 minutes left in the contest. The Razorbacks strung together a run midway through the period, cutting the Bulldogs’ lead to three. The Razorbacks continued to chip away at the UGA lead before taking their first lead of the half at the 5:29 mark.

The Razorbacks held a 61-60 lead coming out of the final media timeout, but Frazier quickly grabbed the lead back hitting a pair of shots from the free throw line. The Razorbacks got to the charity stripe to take back the lead at 64-62 with 47.2 seconds remaining, but Frazier scored a big bucket with 24 seconds left to tie things back up at 64-64. The Bulldogs forced a turnover to get the games’ last shot, but Frazier’s three-point attempt missed wide left forcing the game into overtime.

Yante Maten scored the first points of the overtime period followed by a turnover caused by Georgia’s defense on the Razorback’s first possession. The Bulldogs relied on its leaders when it counted most and they stepped up. Gaines, Mann and Frazier led the Bulldogs on a 6-0 run with one minute remaining in the overtime period to give UGA some breathing room. The Razorbacks cut the lead to one point with seven seconds left, but it wasn’t enough as the Bulldogs held on for the win.

Georgia hits the road on Tuesday to Baton Rouge, Louisiana to face the LSU Tigers at 9 p.m. ET. The game will be nationally televised on ESPN.

• Georgia’s victory gives the Bulldogs a 9-5 lead all-time at Stegeman Coliseum against Arkansas, although Arkansas leads the overall series 20-15.
• Georgia moves to 1-1 in overtime this season after a season-opening loss to Chattanooga (90-92) on November 13.
• J.J. Frazier paced Georgia in scoring with 26 points. The game marked the fifth time this season Frazier has gone over 20 points with Georgia going 4-1 in those games. He also added three steals to his team-leading total of 27.
• Kenny Gaines’ 16-point scoring output moved him past Travis Leslie (1,099) and Michael Chadwick (1,100) into 28th place all-time in scoring at Georgia with 1,112.
• J.J. Frazier’s nine 3-point attempts gave him 295 in his career, moving him to No. 17 all-time past Nemanja Djurisic (292).
• Houston Kessler tied a career high with seven points.
• Kenny Gaines led the Bulldogs with 40 minutes which also set a new career high.

On tonight’s game…
“That was certainly a very hard fought SEC game. We feel fortunate to beat a very good Arkansas team, a team that I thought played really, really hard, and it was a battle. We were fortunate to win the game versus a team that we have great respect for, a program we have great respect for. We feel fortunate to win the game even though we didn’t shoot free throws well. Certainly, we could have made it much easier in the end than we did, but we still leave here with the result we wanted.”

On the play of J.J. Frazier…
“He is such a competitor. If every competitor could have the heart of that guy, they would have an advantage from the start. His competitiveness and his will to win carried him through a lot of discomfort today, and it’s also contagious. You need that spirit within your team, and J.J. brings that to us. I think tonight that spread throughout our group.”

On tonight’s performance…
“I feel tired but I’m glad that I could get the job done. We did what we needed to do to win. It’s great to win at home and our fans came back out even though we dropped one last Saturday. We just wanted to show our character and what the Dog Nation is about.”

On free throws…
“We were pretty exhausted but that doesn’t give us an excuse to miss as many free throws as we did. We should have closed it out a little bit earlier.”

On tonight’s performance…
“I always want to do whatever I can to help this team. Whether that be rebounding, playing defense, getting rebound putbacks, shooting free throws, whatever it may be, I just want to win. Moving forward, we’ll build off of this win but it’s still a process and we are still going to prepare for our opponent and try to execute the game plan and play as hard as we can.”

On tonight’s game…
“Well not the way I wanted it to end. There were some controversial things that took place out there…but give Georgia credit, they did what they had to do to hold serve at home. We had opportunities, a lot of opportunities, to finish this game off and there’s only so many windows of opportunities. Between free throws, turnovers, rebounding, and I just think just digging in and making plays, we didn’t do that tonight and it cost us another game.”

On Anton Beard’s play…
“I thought he came in and gave us a big lift off the bench and that’s why he was out there in crunch time. He did some good things out there to give us a chance.”