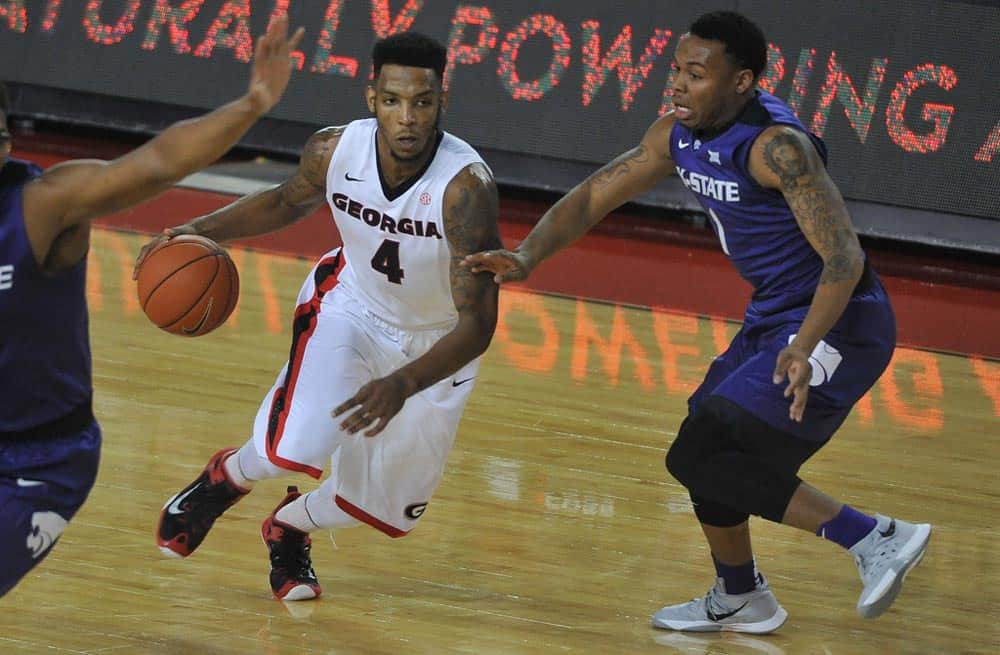 Sophomore forward Yante Maten led the way for the Bulldogs with 20 points, including a career-best eight field goals, and five rebounds. Senior Kenny Gaines added 17 points of his own and junior J.J. Frazier finished with 11 points.

“It was a disappointing second half for our team,” head coach Mark Fox said. “We had a very poor start to the second half. I thought we had a questionable shot and a couple offensive turnovers. We never could regain a real offensive rhythm in the second half. We couldn’t get a stop and rebound to win the game.”

Georgia led by as many as 12 points in the first-half with just under eight minutes to go eventually taking a 37-28 lead into the break. Kenny Gaines and Yante Maten teamed together to score 23 of the Bulldogs’ 37 total first-half points.

The Bulldogs were all over the Wildcats defensively holding Kansas State to just 34.5-percent shooting from the floor. Georgia made an effort to force the ball down low and it showed with the Bulldogs hitting 50-percent of their first-half shots. Georgia hit on three of its seven 3-point attempts in the first twenty minutes.

Kansas State jumped out to a 15-5 run to start the second-half taking a 43-42 lead with over 13 minutes left in the game. The Wildcats forced several turnovers and held the Bulldogs to only five points in the first eight minutes of the second half.

J.J. Frazier sparked a run midway through the half scoring five points in a row to reclaim the Bulldogs’ lead at 49-47.Frazier scored seven of his eleven points in the second half.

The last four minutes went back-and-forth as both teams battled for the lead. Freshman Mike Edwards hit the front end of a one and one to tie the game up at 66, but Kansas State’s Dean Wade hit a 15-foot baseline jumper that gave the Wildcats a 68-66 lead. J.J. Frazier was able to get one final look, but his long 3-point attempt ended just short.

The Bulldogs return to action on Tuesday at 7 p.m. hosting Winthrop at 7 p.m. at Stegeman Coliseum. The game will be nationally broadcast on the SEC Network.

• The 68-66 loss for Georgia gave Kansas State a 2-1 lead in the all-time series. This contest was the first ever in Athens. Both teams are now 0-1 on their respective home floors in the series.
• Derek Ogbeide made his UGA debut when he checked in at the 17:27 mark of the first half.
• Turtle Jackson checked in to the game at 9:49 of the first half, the 11th Bulldog to see the floor in the game. That number represented the highest participation of the season. Georgia had gone 10-deep in its previous three games and nine-deep in the opener.
• Houston Kessler’s five points represented a season high. His team-high, seven-rebound performance was the first time he was alone atop the rebound column for the Bulldogs this season.
• Georgia’s eight blocks tied No. 9 North Carolina’s total for most against Kansas State this season.
• With the visitor’s claiming a 36-35 edge in rebounding, the Bulldogs fall to 1-3 on the season when losing the battle of the boards.
• Yante Maten set a new career high with eight field goals, besting his previous high of six.

On what he told the team…
“You got to toughen up and compete because every game is a challenge. There are no easy games. That’s a tough lesson to learn. I thought we had some mistakes by our young people today that they will learn from, but boy, they are costly when you look at the final score.”

On the road victory…
“With a young team, playing against a veteran team at their place, I know they have some new pieces, but they’ve got three guards that have played a lot of minutes in the SEC and been very good against a lot of good teams. I thought our defense picked up a little bit…We stayed down on their shot fakes and kept them out of the paint a little more and then just kept playing.”

On Dean Wade’s impact down the stretch…
“Dean missed his first five shots and then in the second half got on a roll and then obviously a couple of big ones…We said if you don’t have anything go bubble screen and pop and they had been worried about West getting in the lane so much that he hit Dean and he made it…It’s funny because when we do last second situations in practice, he’s made big shots in practice. You have to give credit to a freshman.”

On the last few possessions…
“On the roll and replaces, they were open. My guy was helping on the roll, so I was left wide open out there. I just had to keep my confidence and keep shooting.”

On being on the road…
“To have a successful season, you have to win on the road a lot of the times. So it was a good game for us. We fought hard against them and Georgia’s a good team, so it was a big step for us.”