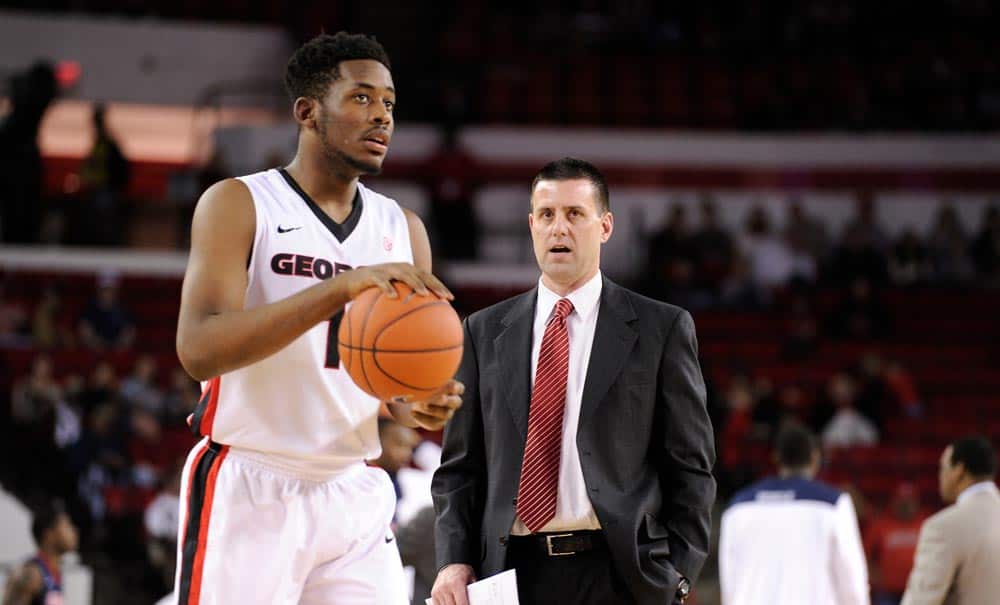 ATHENS, Ga. – The Georgia men’s basketball team (4-3) picked up a 74-64 win against Winthrop (6-2) Tuesday night at Stegeman Coliseum behind a career-night from forward Yante Maten.

Maten finished the evening with a career-high 24 points, 12 rebounds and ten field goals. The Pontiac, Michigan native’s ten field goals made marks the second time that a UGA player has hit double-digit field goals in a game after Kenny Gaines hit the mark against Murray State.

J.J. Frazier and Charles Mann rounded out other Bulldogs scoring in double figures with 15 and 14 points, respectively. Frazier added ten rebounds and five assists for the first double-double of his career.

“That was a good team that we played,” head coach Mark Fox said. “They’re coming in after a great start to their season. They are a very good offensive team and I was pleased with our defense. Late in the game I was pleased with our rebounding. I wasn’t thrilled with our rebounding for the first 30 minutes, but we were better at the end of the game. Our defensive rebounding was the big difference. Offensively, we’re growing so we have some room to grow there.”

The Bulldogs held a double digit lead for the majority of the first half, until Winthrop cut the lead to eight, right before the break to, 33-25. Georgia was led in the first 20-minutes by Maten, who hit double figures in scoring just 11 minutes into the contest. The Bulldogs suffocated the Eagles on the defensive end holding Winthrop to a mere 27.3-percent shooting in the first half, the lowest mark that UGA has allowed in a single half this year.

The Eagles heated up in the second-half closing the gap to, 54-48, with just under nine minutes to go. Winthrop managed to hit several three-pointers in its comeback attempt, including three from Roderick Perkins.

Georgia clamped down the defensive efforts again late in the second half to secure the victory. The Bulldogs held the Eagles to 44.4-percent shooting in the half despite Winthrop stringing together several three-pointers.

The Bulldogs have the remainder of the week off before returning to action on Saturday, Dec. 19 at 12 p.m. ET to host rival Georgia Tech. For all the latest on Georgia men’s basketball, follow the team on Twitter (@UGABasketball) and continue to check in to georgiadogs.com.

• J.J. Frazier received his second starting nod of the season as Kenny Gaines did not play.
• The Bulldogs put the defensive clamps down on Winthrop, holding the visitors without a field goal for a 7:18. The Eagles went 0-for-10 from the field in that stretch, which began after the Eagles’ first bucket. Winthrop finished the first half 9-for-33. It was the second-least field goals allowed in a half by Goergia this season (eight in the second half against Murray State) and was the lowest field goal percentage (27.3 percent).
• Yante Maten scored 10 of Georgia’s first 21 points from the field, beating Winthrop as a team to the 10-point mark by 49 seconds (8:53-8:04).
• The Bulldogs found some space early in the second half on the scoreboard, using a 16-8 run over 7:17 to build the lead to 16 points.
• Maten’s 24 points and 10 field goals made were each career highs.
• Maten’s 10-field-goal performance was the second double-digit field goal contest by Bulldog this year (Kenny Gaines, 10, Murray State).
• Frazier recorded double-digit rebounds for the first time in his career.
• Maten has four straight 20-point games. That is the longest such streak since Trey Thompkins had 20 points in five straight games in February 2010. The game was Maten’s fourth career-high performance of the season. He came into the season with 13 points as a career high, then had 17 against Chattanooga, 21 against Seton Hall, 21 against Oakland and now 24 tonight.
• Frazier and Maten’s dueling double-doubles was the first time that Georgia had two players reach that landmark in 347 days… Last vs. Mercer on Dec. 27, 2014 (Marcus Thornton (17/11), Kenny Gaines (13/10).

“That’s another really good team that we played, Winthrop, coming in after a great start to their season. They’re a very good offensive team and I was pleased with our defense. Late in the game, I was pleased with our rebounding. I wasn’t thrilled about rebounding, even though that’s something we stressed going into the game. I wasn’t thrilled the first 30 minutes with it, but we certainly were better at the end of the game and our defensive rebounding was a big difference.”

On the team’s effort…

On leading the team…

“I always try to lead the team, mostly the freshmen, but when someone isn’t playing, someone else has to step up and be a leader.”

On the size advantage…

On what happened at the end of the first half…

“Yeah, we weren’t in rhythm, we weren’t making shots and we just need to do better in that aspect.”

On playing multiple positions on the team…

“You always have to credit the defense [of Georgia]. I’m not a big fan of when coaches say we just didn’t make shots, you have to tip your cap to Georgia and the way they defended us early on. We talked at halftime with the coaches and our guys, and most of those shots were the type of shots we try to manufacture, but they just weren’t going down.”