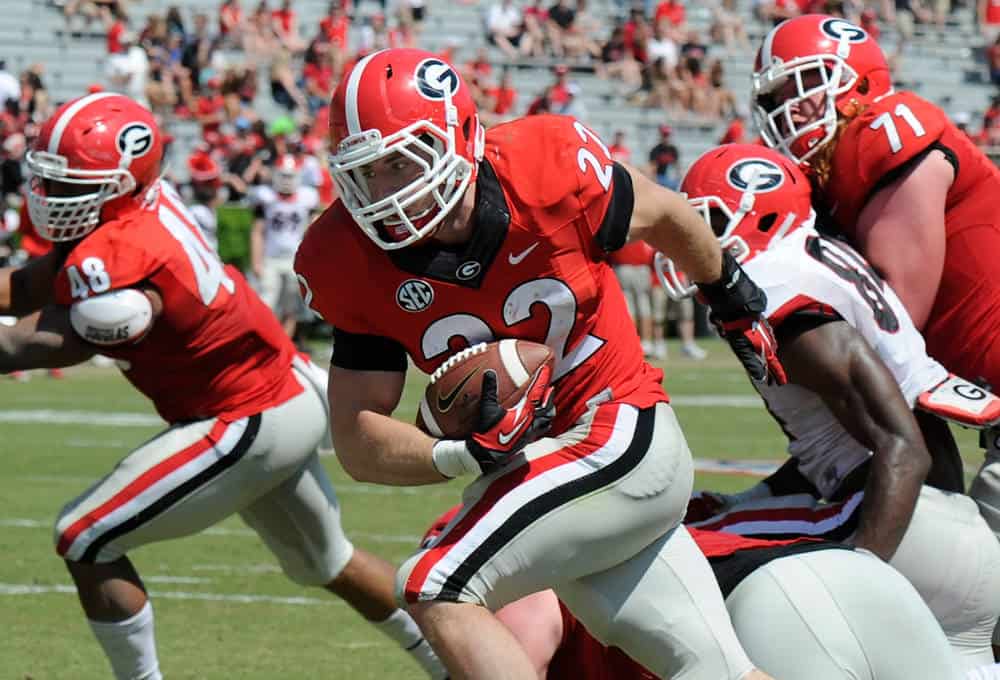 Georgia has arrived in Jacksonville to resume preparation for Saturday’s TaxSlayer Bowl. However, Georgia becomes more depleted daily after losing personnel both on the sideline and on the field.

Many of these announcements have come rather quickly and during a time where Georgia’s football program isn’t getting much attention. The numerous subtractions of player personnel are more likely to affect the performance in the bowl game against Penn State, so here’s an update on who may be absent for Georgia as the Bulldogs try to tally a tenth win.

One of Georgia’s defensive impact players will be suspended for the season finale with no specific reason given by the university. The Bulldogs will need to fill a reasonable void, as Kimbrough totaled 62 tackles. Needless to say, Kimbrough’s absence will have an affect on Georgia’s defensive production as they try to contain the Nittany Lions attack. Kimbrough took to social media to openly voice an apology for his actions.

Apologies to the Bulldog Nation for my actions keeping me out of the bowl. Comin back better than ever for all of you next season. Go Dawgs!

With Georgia star running back Nick Chubb being sidelined by an injury for the majority of the season, the lack of depth Georgia has is extremely evident. The depth will now take another blow, as Brendan Douglas will miss the bowl game due to recently having wrist surgery.

As a result, Georgia will look to depend on a system of two running backs — Sony Michel and Keith Marshall. If the Bulldogs are in need of a third back, it is possible the redshirt qualification could be removed from Tae Crowder or AJ Turman.

After the injury to Douglas, fullback Quayvon Hicks was intended to fill the role as the third running back. That is no longer an option as Hicks will be sidelined by a leg injury, unfortunately ending his career at UGA.

Hicks is known for being a “bruiser” type of back, and could prove to be a pivotal loss, as Georgia will need to turn to the pass game more frequently after the running back subtractions. For the fullback position, Georgia will turn to walk-ons Christian Payne and Glenn Welch.

Freshman receiver Shaquery Wilson will miss the bowl game due to an academic issue. Wilson has only appeared in two games this season, so this will be a minor blow to Georgia’s production.

The playing status of freshman safety Johnathan Abram for the TaxSlayer Bowl is unclear, as is his future with the UGA program. Abram has been absent at practice due to a “personal issue.”

Interim head coach Bryan McClendon told AJC’s DawgNation, “There’s a chance that he could be back but right now we’re not counting on him to be here either.” Abram has been a difference maker for Georgia’s defense throughout the season. Therefore, along with Kimbrough, the Bulldogs will need to look to fill significant voids.

Georgia fans must hope that no more player absences are soon to come, as the game looms in just a few short days. As is, Georgia will be without key players who provide great skill and leadership. Will these subtractions affect Georgia coming out on top? Only time will tell. Watch the Bulldogs take the field for their season finale against Penn State on Saturday, January 2 at noon ET on ESPN.