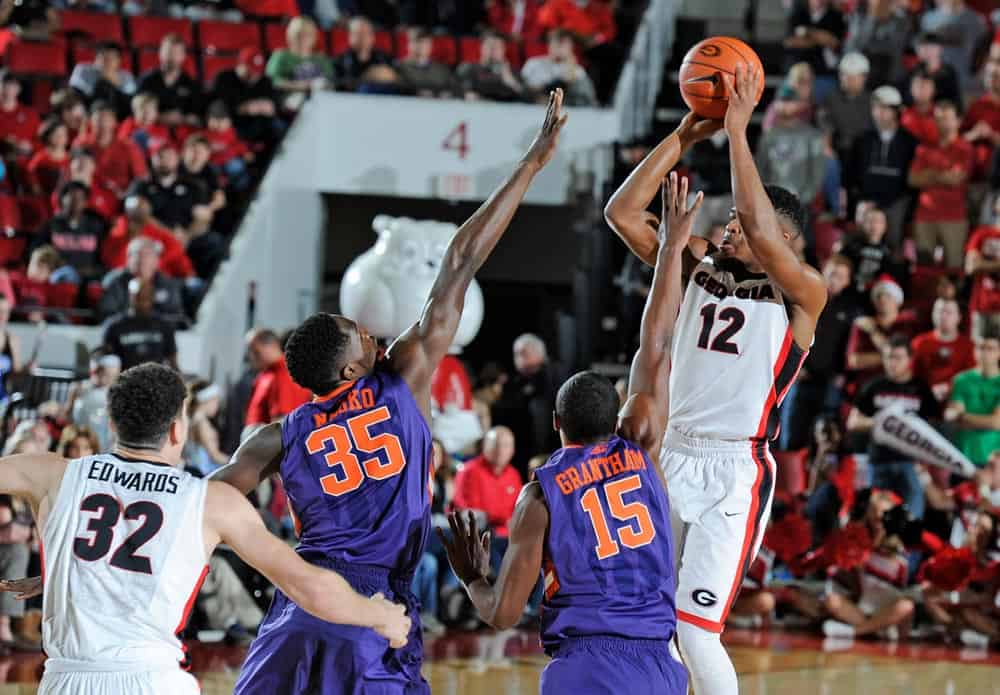 Gaines entered the contest with 997 career points and wasted no time earning his 1,000th-career point, drilling a three-point basket at the 16:47 mark in the first half. The Atlanta native joins fellow senior guard Charles Mann as current Bulldogs to eclipse the 1,000-point mark.

Georgia now holds a 56-24 all-time record against the Tigers and a 31-9 edge in games played in Athens.

“That was a really good win for our program,” head coach Mark Fox said. “We were so prepared for the game because we have so much respect for Clemson. Coach Brownell is such a terrific defensive coach. We really had a great focus and purpose about ourselves coming in. We didn’t start the game great and they really showed us in the first five minutes we better start playing like we’ve been practicing. We were able to flip the switch and play very, very well.”

The Bulldogs were led offensively by Mann with 18 pts. The senior went a perfect 8-8 from the free throw line. Gaines was close behind with 17 points and five rebounds.

Clemson jumped out to an early 13-5 lead just five minutes into the game, but the Bulldogs were quick to recover. Georgia ripped off an 11-3 run over the course of the next five minutes tying up the score at 16-16 midway through the first half. Georgia continued its hot play eventually going on a 25-3 run to take a 28-16 lead with 4:40 left in the period. The Bulldogs smothered the Tigers on defensive end. Clemson was held to a mere 21.8-percent shooting in the half leading to a 39-24 UGA lead heading into the break.

The Bulldogs picked up right where they left off to start the second half going on a 9-2 run in the first two minutes. Highlighted in the UGA run was a big two-hand dunk from Gaines 55 seconds into the half. Georgia used a well-rounded scoring attack during the final twenty minutes. Eight different Bulldogs scored at least one point in the period. UGA’s defense was impressive once against holding the Tigers to 33.3-percent shooting in the half and only 23.1-percent from beyond the arc.

Georgia returns home Tuesday, December 29 to host Robert Morris at 7 p.m. ET at Stegeman Coliseum. The game will be nationally televised on the SEC Network.

• The win improves Georgia’s record all-time against Clemson to 56-24 and 31-9 in Athens. It was the first time Georgia won consecutive games against ACC opponents since 2000-01, when the Bulldogs defeated Georgia Tech (Dec. 6, 2000) and N.C. State (Dec. 9, 2000). Georgia has wins over Clemson and Georgia Tech in the same season for the first time since 2005-06.
• With the 71-48 final score, Georgia held Clemson to less than 50 points for the first time since the contest in Athens during the 1950-51 season, when Clemson scored 45. The 23-point spread was Georgia’s widest margin of victory over a power five opponent since beating Missouri 68-44 a season ago. It was the widest margin of victory over an ACC opponent since defeating Georgia Tech by 24 points (94-70) on Dec. 13, 1995.
• The 27.1-percent FG percentage for Clemson was the lowest from a Georgia opponent this season.
• With his 3-pointer at the 16:47 mark of the first half, Kenny Gaines became the 46th Bulldog to reach the 1,000-point plateau.
• After falling behind 13-5, Georgia went on an 23-3 run over the next 9:42, claiming a 12-point lead. Six Buldogs pitched in as they took control of the game (Jackson-3, Gaines-8, Kessler-1, Frazier-1, Mann-6, Maten-4).
• A salty Dawgs defensive effort held Clemson without a field goal from the 11:15 mark until a buzzer beater (18 straight misses) in the first half. That was the second-longest run of shooting futility by an opponent this season time-wise (11 minutes, 44 seconds – Murray State) but the most consecutive missed field goals (Murray State had 14). The .219 shooting mark for Clemson was the lowest in any half by a Georgia opponent this season.
• The 39 points scored by Georgia in the first half was the highest total in the opening 20 minutes of any game this season. Conversely, the 24 points scored by Clemson was the second-fewest allowed by Georgia in any half this year. The output tied the Tigers’ second-fewest points scored in a half this season.
• Ten of 11 Bulldogs who attempted a field goal registered at least one point in the contest.
• Derek Ogbeide poured in a career-high six points, setting new career highs for scoring in back-to-back-to-back games.
• Connor O’Neill checked in for game action for the first time this season.

On tonight’s game…
“Really good win for our program. We were so prepared for the game because we have so much respect for Clemson. Coach Brownell is such a terrific defensive coach and we really had a great focus and purpose about ourselves coming in. We didn’t start the game great, and they really showed us in the first five minutes that we better play exactly like we’ve been practicing. We were able to flip the switch and play very well.”

On the balanced scoring effort…
“Even though I didn’t have the biggest scoring night, I was still happy because our team was playing really well and efficient. I made the ones I was given the opportunity to make and that’s the way I contributed to my team. I was happy with the way we played tonight.”

On the interior defense from Georgia…
“We were maybe a little too aggressive on the inside because we had a lot of calls against us because we were in the paint, but we have to set our foot down. We have people to come in if we get in foul trouble.”

On the break…
“We need this. We need rest, to decompress a little bit. We are going to get back going later this week. This time is needed. We get to go see family, spend some time at home., but when we come back, it’s back to the grind.”

On tonight’s game…
“We just didn’t defend very well in the second half. It’s a little frustrating after we got off to the great start up 13-5, playing with a bunch of confidence…To Georgia’s credit, guys stepped up and made plays. I think Kenny Gaines hit three threes in the first half and a couple of them were tough shots that were guarded, and that rallied them a little bit. For whatever reason we’re having trouble with the counter punch…Georgia’s a good offensive team and they capitalized. When Mark’s team gets a lead like that it’s going to be hard because they can grind you.”

On Clemson’s offensive drought…
“We had a couple of guys [force shots]. We’d force shots when teams were down, they were trying to make a play. We’re just struggling right now because we don’t have a great perimeter driver to break teams down. It makes it hard for us…We were also in foul trouble so we had a couple of different lineups.”

On Georgia’s offensive attack…
“Our defense wasn’t really set. We got caught in transition a lot and had to take the ball out of bounds a lot. To their credit, they made a lot of shots and we didn’t score enough.”