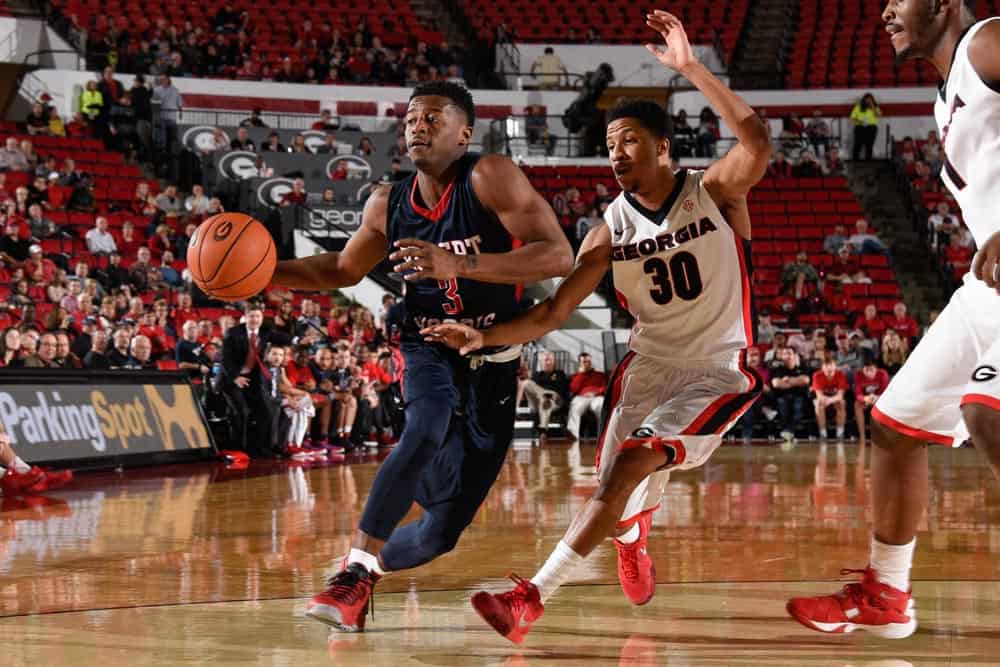 The Bulldogs jumped out to a quick 6-0 lead in the first two minutes and never surrendered their lead in the first half. Robert Morris tied the game up 6-6 4:34 into the contest, but Georgia responded with a 10-0 run over the next four minutes. Frazier gave the Bulldogs a final boost of momentum before halftime scoring a four-point play with 2.4 seconds left in the period after getting fouled on a made three-point basket. Nine different players scored in the half giving the Bulldogs a 38-27 lead heading into the break.

The Colonials cut the Bulldogs’ lead to as low as five with 15:31 left in the game, but Georgia forced several turnovers on the ensuing possessions to push its lead to 52-42 at the 12-minute media timeout. The Bulldogs extended their lead to 16 after a pair of free throws from Kenny Paul Geno and two baskets from Frazier. Several minutes later Frazier put the final stamp on the game hitting a long three-pointer for his 17th point of the game.

The Bulldogs held the Colonials to just 37.9-percent shooting on the game. Georgia was everywhere on the defensive end forcing Robert Morris to commit 12 turnovers. The Bulldogs never trailed in the game.

Georgia begins SEC play on January 2nd when the Bulldogs travel to Gainesville, Florida to take on rival Florida at 8 p.m. ET. The game will be televised on ESPNU.

With the 79-67 win, the Bulldogs increased their all-time series advantage over Robert Morris to 2-0.
• Since adding J.J. Frazier to the starting lineup against Winthrop, Georgia is 4-0 with an average margin of victory of 14.75 points. Over that span, Frazier has hit double-digit points in three games and is averaging 19 points per contest.
• Nine of 11 Bulldogs who played in the first half registered pionts. All of those nine scored between two and nine points, leading to the balanced 38-point output.
• Despite scoring 38 points in the game’s first 20 minutes, the Bulldogs attempted only three free throws. It was the second-fewest FTA in any half this season (none vs. Seton Hall, first half).
• With his emphatic slam at the 13:59 mark of the second half, Kenny Paul Geno became the 10th Georgia player to score for the game.
• The Bulldogs shot out to a 6-0 lead in the game’s early minutes, and they held Robert Morris at bay the rest of the way. RMU never drew even or took the lead in the contest, the first time a Georgia contest has featured no lead changes on the year.
• Osahen Iduwe’s layup in the final minute meant 11 Bulldogs scored in the contest.
• The Bulldogs closed the non-conference portion of the schedule with four consecutive double-digit victories. The last time Georgia had such a streak to enter conference play was in the 2002-03 season.

On tonight’s game…
“If you look at the numbers from the game tonight we shoot above 50 percent, we hold them to below 40 percent and we win by double figures. So the first game out of the break, you would think that we’d be happy with that, but I don’t think we played particularly well to be honest with you. Certainly Robert Morris came to play and we were fortunate to play from in front, but we had a lot of rust it looked like at certain times during the game.”

On freshmen playing time tonight…
“We played our freshmen versus our first group this week in about a 15 minute scrimmage and the freshmen won, so I got more and more faith in that group to play and tonight they all gave us pretty good minutes.”

On moving to SEC play…
“We need to give it more energy on the defensive side. We gave up a lot of baskets. We also need to work on rebounding.”

On the play of Kenny Paul Geno….
“In the second half, Geno came in and boosted us. He gave us enough rhythm offensively and defensively to kind of pull away but still have to improve as a team.”

On the play of the team’s freshmen…
“They beat us in a segment of a scrimmage. We imposed our will on them. They are a good group of guys. They are good players and good people. All they want to do is learn. As much film as they watch, you can see the improvement, even in practice. They play hard and they pay attention to detail. It feels good to see those guys improving.”

On tonight’s game…
“Obviously you have to credit Georgia for putting some pressure on us and making us a little bit uncomfortable on the offensive side of the floor, executing against our zone relatively well at times. I think we also shot ourselves in the foot at times. When you work really hard to get back into the game – we cut it to six, we cut it to five – and then we go, turnover twice or maybe take a quick shot instead of trying to control tempo and work for that better shot.”

On J.J. Frazier’s four-point play at the end of the first half…
“That’s kind of unfortunately a microcosm of what we’ve been this year. We do something positive, we execute out of a timeout and we get a great shot, then we come back down the floor and we’re thinking about the wrong stuff whether it’s celebrating, whether it’s thinking they’re not going to try to push and score. We just got caught off guard. It’s frustrating from a coaching side because the game is difficult as it is.”