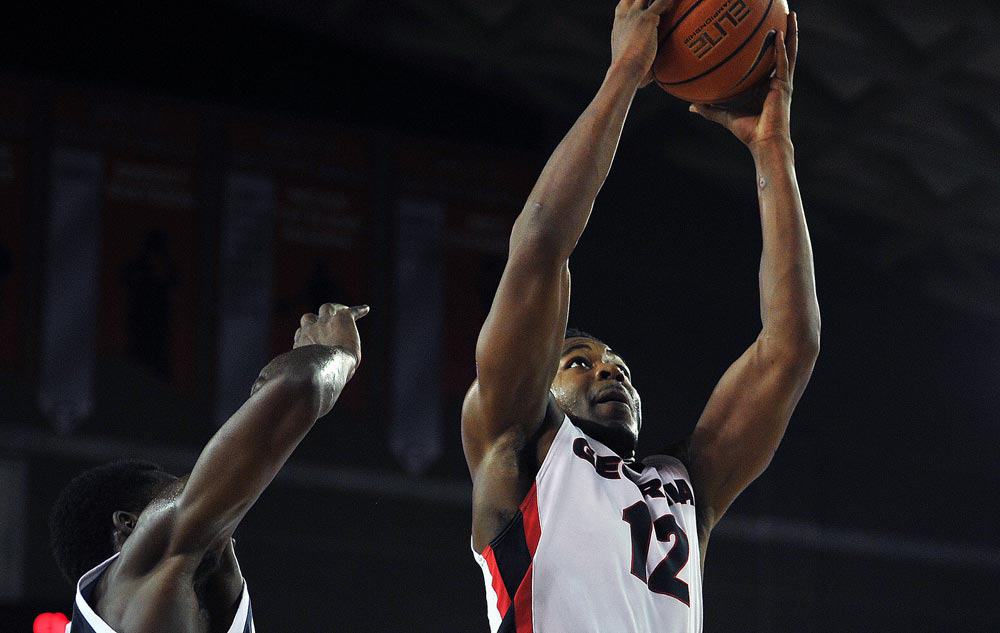 The hot-shooting Mocs hit 12 of 30 three-point attempts and drilled 20 free throws in the defeat. Despite shooting 54 percent from the field, the Bulldogs were limited due to 21 turnovers and allowing 15 offensive rebounds to Chattanooga.

Georgia was led on offensively by J.J. Frazier who poured in 22 points. Forward Yante Maten chipped in a double-double on a career-high 17 points along with 13 rebounds.

“It was certainly not the way we wanted to start the year,” head coach Mark Fox said. “We scored 90 points and go beat. We shot 54 percent from the field and got beat. We shot 50 percent from three and got beat. We didn’t defend and missed 17 free throws. We did not defend the three-point line and did not rebound the ball. You’re not going to win if you don’t do those things. Hats off to Chattanooga’s team. They made more plays tonight then we did.”

A clutch free throw with 12.8 seconds left in the second-half by Charles Mann tied the game up at 74-74. The Mocs were left with the last possession of the half, but stout defense from the Bulldogs held the Mocs without a good look forcing overtime.

Chattanooga hit several shots down the stretch and was able to get to the free throw line when it counted. Frazier hit several three-point baskets late in the overtime period, but the Bulldogs were unable to hold on.

The Bulldogs trailed the Mocs 39-31 heading into the break. Hot 3-point shooting, including seven shots made from behind the arc, paced Chattanooga in the first 20 minutes. A contrast in styles was evident with the Mocs taking twice as many shots as UGA in the first half. Both teams ended the half shooting 38 percent from the field.

Mante Yaten and Charles Mann led the Bulldogs with 10 points each in the first-half. Maten was able to hit four of five field goal attempts and rip down five rebounds. Chattanooga’s Greg Pryor led all scorers at half with 11 points including going 3-3 from behind the arc.

The Bulldogs return home next Friday at 7 p.m. to host Murray State at 7 p.m. ET in Stegeman Coliseum. The game will be televised on the SEC Network+.

• UGA is now 30-5 all-time against Chattanooga, and 23-4 in Athens. The contest was the first ever time the teams played into overtime.
• The contest was Georgia’s first overtime game since beating Alabama 66-65 on Feb. 21, 2015. UGA is now 55-71 all-time in OT and 26-31 at home.
• Charles Mann’s buzzer-beating 3 at the half tied him for the team lead of 10 points with Yante Maten. It was the first time Maten led (or tied for the team lead) in scoring in a half since the first half of the Bulldogs’ game against Minnesota a season ago on Nov. 28, 2014. Maten’s 12 points that day were the last time he hit double digits in a half. It also marked the third time he’s led the team in scoring in a half.
• William “Turtle” Jackson, E’Torrion Wilridge and Mike Edwards all made their collegiate debuts in the contest.
• J.J. Frazier’s layup at 10:21 of the second half gave Georgia its first lead of the game, 53-52. The Bulldogs trailed by as much as 11 early in the second half.
• Maten finished the contest with 17 points and 12 rebounds for his second career double-double. It was his first since Georgia’s contest vs. Seton Hall on Dec. 21, 2014. His outburst also represented a new career highs in points and boards.
• J.J. Frazier finished with a career-best 8 assists in the contest.
• With Kenny Paul Geno’s tip-in at 1:13 in overtime, every Bulldog (9) to see the court reached the scoreboard.
• Georgia’s 45 free throws as a team were the most since shooting 48 against Troy last season.
• 90 points was the best offensive output for Georgia in a season opener since hanging 107 on Jacksonville State to start the 2007-08 season, when the Bulldogs won the SEC Tournament.

On areas to improve…
“I would say that the rebounding, because we had to play small, that the rebounding is probably something with a normal lineup I don’t see as being as huge of an issue. That I think we can correct, but we have to be better defensively, certainly, to win. And we have to do a better job shooting free throws.”

On the team’s performance…
“(Chattanooga) came out and they were determined to get a W. We needed to fight back a lot harder than we showed. We didn’t fight back to our fullest capability. We know that we did leave a lot of energy out there. I think we had a lot more in us. We didn’t deplete the tank.”

On finding offensive rhythm with the amount of fouls called…
“It is a little bit difficult. When you keep going up and down you get into a rhythm after a while. You just have to play the game.”

On rebounding from a season-opening loss…
“Nobody expects to lose, but it’s a long season. If we pack it up now after one game we’re never going to be good. It’s just one game out of 30. We’ll get it back together.”

On tonight’s game…
“I felt like our guys were in the moment the whole game. I never felt like they got really rattled. J.J. Frazier made some really, really tough shots down the stretch and we didn’t get deflated. As a coach, I was really proud standing over here with that.”

On the fast start to the game…
“I think that was one of the biggest keys in the game. If you watch the tape the last couple of years we really struggled in the beginning of the game…When you play on the road in an environment like this, it’s huge to get off to a good start because then emotionally you understand that you have a chance here and you can win this game.”

On the game…
“We really had to stay calm and stick to the things that we do. They made a couple big shots and the crowd got into it, so we just had to stay calm. We had to run our offense and get the shots that we normally get and we were getting them the whole game. The game just came to us.”