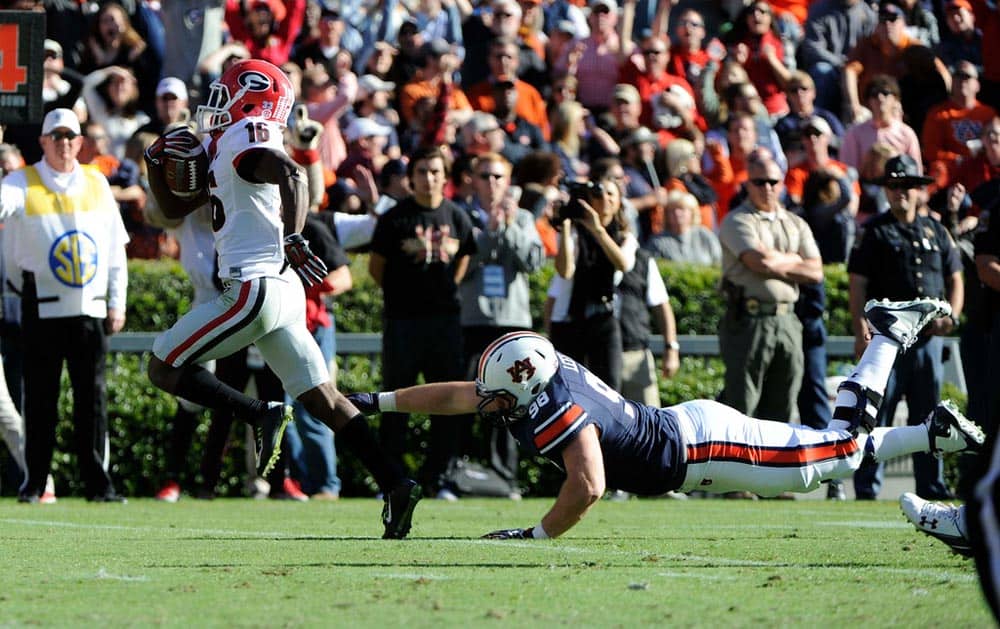 Despite trailing 10-3 at halftime, Georgia scored 17 unanswered points in the second-half highlighted by a 53-yard punt return for a touchdown with 9:28 left in the fourth quarter by Isaiah McKenzie to put the Bulldogs ahead 17-10. The ensuing possession Georgia’s defense forced a fumble deep in Auburn territory leading to a 38-yard Marshall Morgan field goal extending the score 20-10 with 6:49 remaining in the game.

Georgia’s defense put the final stamp on the game forcing a fumble on the one-yard line on the Tigers second to last possession. Auburn hit a late field goal, but Georgia was able to recover the onside kick and run out the remaining time.

The Bulldogs were led on the ground with 77 yards from running back Sony Michel. Quarterback Greyson Lambert finished 12 for 17 through the air with 97 yards. Georgia’s defense stuffed the Tigers all afternoon holding them to just 62-yards passing and 275-yards overall.

The Tigers were first on the scoreboard punching in a seven-yard touchdown run just over four minutes into the game. An interception by UGA’s Malcolm Parrish on the 40-yard line led to Georgia’s first points of the game, a 40-yard field goal from Marshall Morgan.

Auburn’s Daniel Carlson hit a 53–yard field goal right before halftime to give the Tigers a 10-0 lead heading into the locker rooms. A slow start offensively and missed opportunities in the red zone limited the Bulldogs’ scoring chances early.

The Bulldogs tied things up at 10-10 with a four-yard touchdown on a sweep to Isaiah McKenzie. The drive was kept alive on a critical personal foul facemask call against Auburn on a third and short.

Georgia returns to action next Saturday hosting Georgia Southern at 7 p.m. ET at Sanford Stadium. The game will be nationally televised on ESPNU.

*McKenzie Ties School Record With 5th Return TD: Sophomore Isaiah McKenzie tied a pair of school records with his 53-yard punt return for a TD to put Georgia in front 17-10 in the 4th quarter. It was his fifth career return for a TD, tying him with Brandon Boykin (2008-11) as McKenzie now has four punt return TDs and one kickoff return TD in his career. His four punt return TDs ties him with Buzy Rosenberg (1970-72). McKenzie accounted for Georgia’s other TD today, his first offensive score of his career, coming on a four-yard rush.
Before today, Auburn had not allowed a punt return for a TD in 10 years (LSU’s Skyler Green in 2005 for 66 yards). Also this year, the Tigers had allowed just 31 punt return yards on four coming in today and that ranked fourth nationally. Georgia now has scored 24 special teams TDs in the Richt era.

*Defense and Leading Tacklers: Senior Jake Ganus led all tacklers with 11 stops while junior Leonard Floyd and senior Jordan Jenkins had six apiece. In the first half, Auburn ran 30 plays for 185 yards and held a 10-3 edge on the scoreboard. In the second half, the Tigers were limited to only three points on 34 plays for just 90 yards. Jenkins had a sack and a tackle for a loss (TFL). Jenkins has 39 career TFL, which is 4th in school history.

*Points Off Turnovers: Georgia got 6 points off one interception (Malkom Parrish at the UGA 40) and two fumble recoveries (Jordan Jenkins at the AU 17) and (Aaron Davis at the UGA 1). The Bulldogs are now +1 in turnover margin and have scored 49 points off 17 turnovers. Georgia did not have any turnovers today. The Tigers were +10 in turnover margin in their last six games coming in today.

*Dual-Threat Bulldogs: Sophomore TB Sony Michel and sophomore WR Isaiah McKenzie carried the load for the Bulldog offense. Michel matched his career-high in carries with 26 today, and he had 77 yards rushing plus two catches for 13 yards. McKenzie had 96 all-purpose yards (53-PR, 26-rushing and 15-receiving). In the third quarter, McKenzie added a four-yard scamper for a TD to cap a 67-yard drive. It was his first career offensive TD to go with a school-record tying five on special teams. Junior Greyson Lambert started at QB and finished 12-for-17 for 97 yards.

*For Starters: Senior John Theus (RT) started his team-leading 30 consecutive game and 45th for his career. Junior Greg Pyke returned to the starting lineup at right guard after Dyshon Sims got the nod there last week. Pyke has started at that spot in nine of 10 games this season. Sophomore Isaiah Wynn made his second straight start at LT. Pyke injured his left knee in the second half and did not return.

*4th Down Attempts: Georgia came in today 2-for-6 on the year on 4th down, and in the first half went 1-for-2. On a 4th-and 4, Malcolm Mitchell caught a 5-yard pass from Greyson Lambert but later in the drive on 4th and 1 at the AU 2, Lambert’s slant pass attempt to Mitchell was behind him and fell incomplete. Auburn drove to the UGA 40 before sophomore Malkom Parrish stopped the drive with a leaping interception, the first of his career.