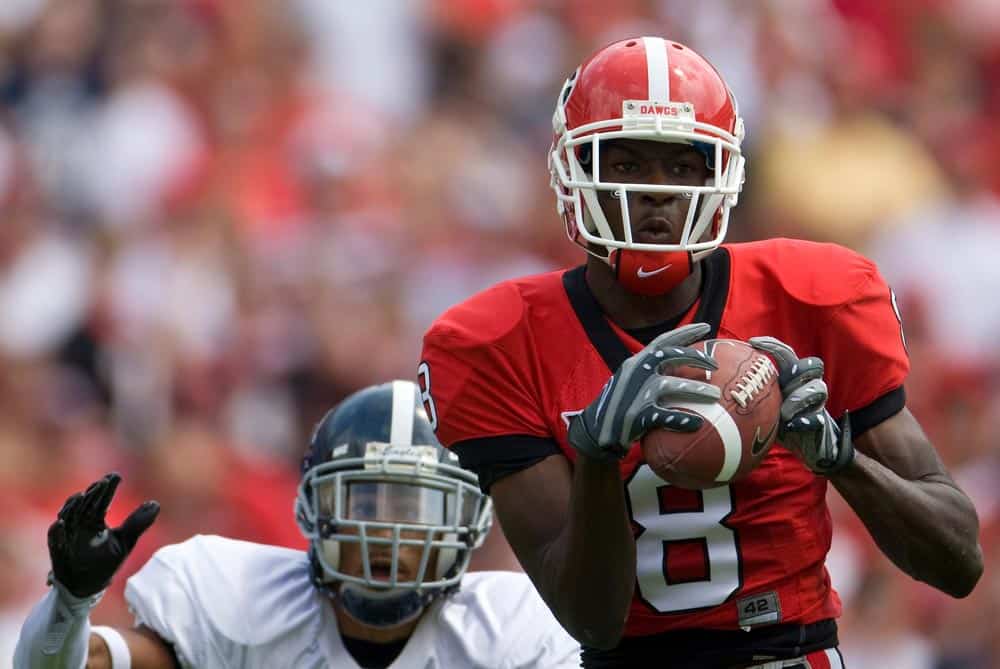 ATHENS, Ga. – A.J. Green left his indelible stamp upon the Georgia football program as a playmaking pass catcher of recent vintage. He has now created a greater, more lasting legacy through his generosity off the playing field.

Green and his wife Miranda have announced the endowment of two scholarships at his alma mater: The A.J. Green Family Football Scholarship, intended to provide support for a student-athlete on the UGA football team, and the A.J. Green Family Scholarships, earmarked to support two need-based UGA students, with first preference going to students from Green’s home state of South Carolina.

The Greens will be honored for their contribution at an on-field recognition at the Georgia-Kentucky game on Nov. 7.

The Greens have stipulated that the recipient of their football scholarship represent UGA ”in an outstanding manner in the classroom as an honor student, on the playing field, in the community, and who also demonstrates a commitment to the University and its football program.”

”I’m very excited and very thankful that we were in the position to give back to the University of Georgia,” Green said. ”My time at UGA is still close to my heart. It was definitely important for me to give back while I’m still playing professionally and I’m fortunate that we are able to do that.”

The latter scholarship also holds a special place in A.J. Green’s heart. He was inspired as a middle schooler by his football and basketball coach in his hometown of Summerville, Louis Mulkey, who died in 2007 while performing his day job as a Charleston firefighter.

”His big thing was helping kids realize their full potential,” Green said. ”He pushed me every day to become the best I could be, on and off the field. By giving back, and having the opportunity to pay the way for somebody who otherwise couldn’t, is a great way for me to help them realize their potential. That was very important to me.”

A native of Summerville, S.C., Green earned All-SEC honors in each year he played at Georgia (2008-10). He ranks second in career TD catches (23), third in career receptions (166) and receiving yards (2,619), all despite playing just three seasons. A freshman All-American in 2008, Green was regarded as one of the nation’s top wide receivers in both 2009 and 2010, when he was a Biletnikoff Award finalist each year. He was the Bulldogs’ Offensive MVP as a sophomore in ’09 and the team’s overall MVP after the following season.

”We are deeply appreciative of A.J. and his wife Miranda for this wonderful gift,” said Georgia head football coach Mark Richt. ”With this gift, they are creating a tremendous legacy — of giving back and helping the next young person fulfill his or her dreams. Their generosity will endure for years to come.

”A.J. continues to be a great ambassador for Georgia. We see him on Sundays in the NFL with tremendous pride, knowing that he’s still a big part of our UGA family. He’s now in position to serve as a role model for all of our players from the present, past and future.”

Taken fourth overall by the Cincinnati Bengals in the 2010 NFL Draft, Green has become one of the league’s elite wide receivers. He’s already earned All-Pro honors twice (2012-13) and has played in the Pro Bowl all four years in which he was eligible. He has become the first player in Cincinnati franchise history to reach the 1,000-yard receiving milestone in each of his first four seasons. The Bengals, who are off this weekend, are currently one of just five undefeated teams through six games of the NFL schedule.