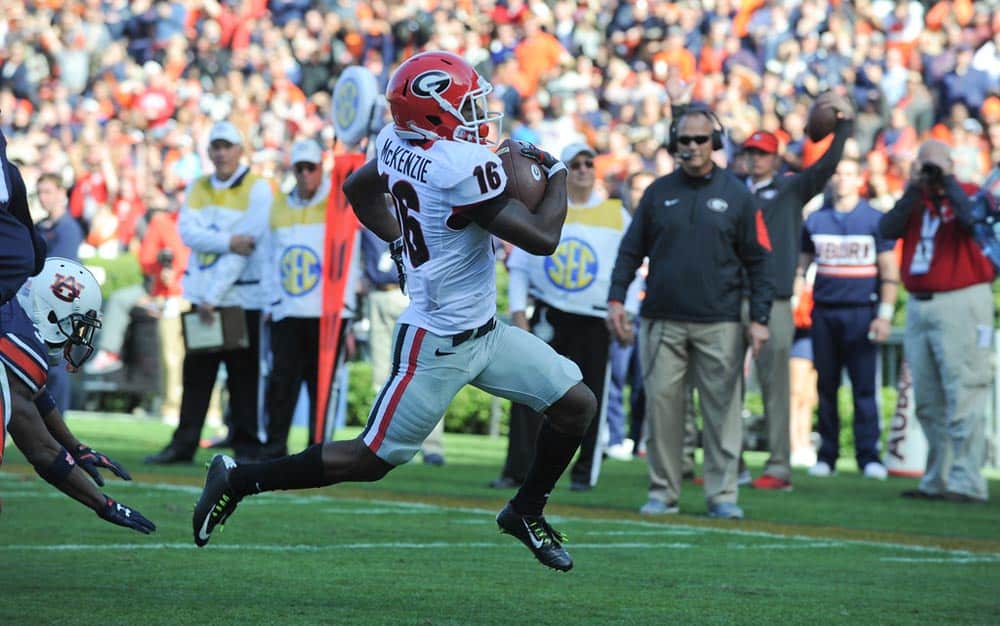 ATHENS, Ga. – Georgia sophomore Isaiah McKenzie has been named the Southeastern Conference Special Teams Player of the Week for the second time this season following the Bulldogs’ win at Auburn, according to a league announcement.

McKenzie, who also garnered the honor following Georgia’s victory at Vanderbilt this year and once in 2014, is one of five Georgia players to earn six SEC weekly awards this season, including three in the special teams category.

A native of Miami, Fla., McKenzie tied a pair of school records and moved up the SEC records books with his 53-yard punt return for a touchdown to put Georgia in front of Auburn 17-10 in the fourth quarter. It was his fifth career return for a touchdown, tying him with Brandon Boykin (2008-11) as McKenzie now has four punt return touchdowns and one kickoff return for a score in his career. McKenzie and Boykin are also tied with six other players for third in the SEC in this area.

McKenzie’s four punt return touchdowns tie him with Buzy Rosenberg (1970-72) on Georgia’s all-time list (tied with Rozenburg and seven others for fifth all-time in the SEC). McKenzie accounted for Georgia’s other touchdown as well versus the Tigers, his first offensive score of his career, coming on a four-yard rush. He finished with four carries for 26 yards.

Before last weekend, Auburn had not allowed a punt return for a touchdown in 10 years (LSU’s Skyler Green in 2005 for 66 yards). This year, Auburn had allowed just 31 punt return yards on four coming into Saturday’s game and that ranked fourth nationally.