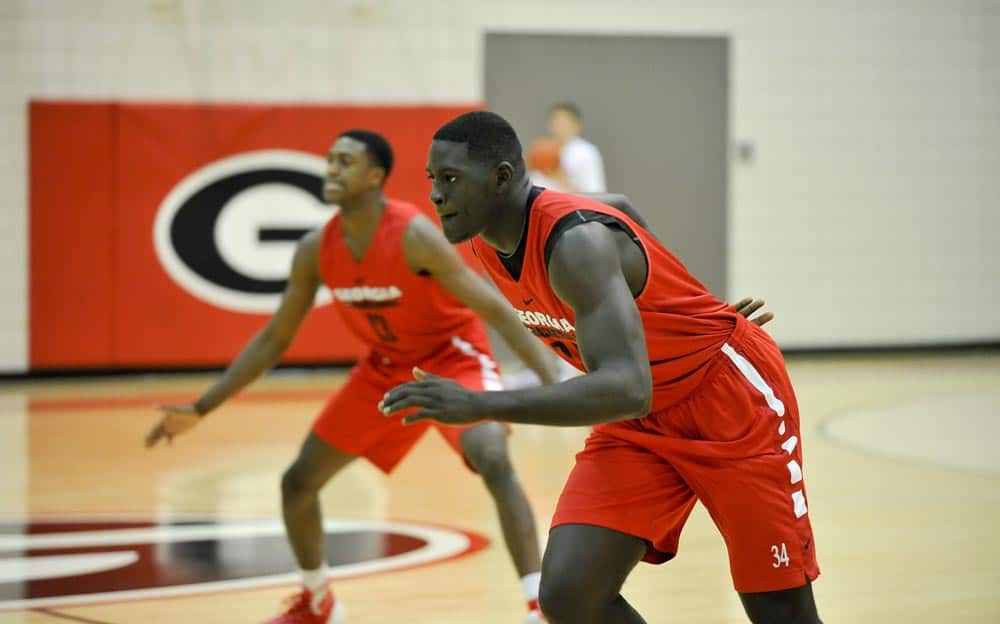 Georgia Basketball tips off their season this Friday against UT-Chattanooga. The Dawgs have high expectations this season within their program but will have to integrate their wave of young talent in order to successfully replace their departing senior leadership.

The freshmen for the class of 2016 include William “Turtle” Jackson, Derek Ogbeide, E’Torrion Wilridge, Michael Edwards, and Connor O’Neill. All of these players will need time to develop into their full potential at the college game. However, they are all expected to make immediate impact for the Dawgs. Each player possesses a unique skill set. Here’s a detailed look at what they bring to the team.

#0 William “Turtle” Jackson – Guard
Jackson is the sole guard in this 2015 recruiting class. He should provide guard depth for Georgia this season. He will use his freshman season in preparation for taking over the spot of senior guard Charles Mann. Jackson has drawn many comparisons to Mann, a player who drives inside and rebounds well, due to being “oversized” for his position. Quite obviously, he won’t post an average of 21.3 PPG as he did at Athens Christian this past season, but I believe he will be useful to Fox’s squad due to his unique skill set. Georgia has lacked significant guard depth for sometime, however I believe it has arrived in Jackson as he prepares to be the premiere “game manager” for the Dawgs.

#34 Derek Ogbeide – Forward/Center
Ogbeide will fill Georgia’s most valuable position from last season. He will have to fill the void of Nemanja “Nemi” Djurisic and Marcus Thornton, who have both graduated from Georgia. He will have to work effectively with sophomore forward Yante Maten and quickly get past the learning curve of the college game. Ogbeide stands at 6’8” giving Georgia a great deal of size in the frontcourt. His stature and skill set leads me to believe that he will be the next big name in Athens, making a significant impact throughout his four years. Ogbeide will miss the beginning of the season due to a shoulder injury, however Georgia staff believes it is mild.

#13 E’Torrion Wilridge – Forward
Similarly to Ogbeide, Wilridge offers size in the frontcourt but in more of a bench role his freshman season. Wilridge stands at 6’6”, so he should have the size in order to make an impact with either Maten, Ogbeide or Edwards beside him. Wilridge’s expertise seems to be his superb ability to drive in the paint and catch rebounds. Georgia will need this as the massive void left by Djurisic and Thornton will need to be filled. The recruiting strategy implemented by Coach Fox and Coach Hayes had a core focus of providing depth for Georgia, and they seem to just be doing that.

#32 Michael Edwards – Forward
In the past two years, Mark Fox has brought in two men from the state of Michigan. Edwards joins sophomore Yante Maten from that state. Edwards will provide even more depth for Fox, as Georgia’s frontcourt is loaded with talent but inexperience as well. Most of the Georgia forwards brought in for this season specialize in the paint. However, Edwards may be of a different breed. His ability to shoot from the outside will be a nice complement to Georgia’s offensive style of driving in the paint. The two Michigan big men can be quite a tandem for Coach Fox and the Dawgs and can have a big impact during SEC play.

#32 Connor O’Neill – Forward
O’Neill wraps up Fox’s recruiting class for the 2015-2016 campaign. Due to a crowded frontcourt, it may be a struggle for him to find consistent playing time his freshman year. However, his skill set shows that he is talented enough to be recruited by an SEC school. O’Neill can use this season as a jumpstart to potentially seeing more time in the future.

Understandably, Georgia’s freshmen should see a lot of time this season and play significant roles. Georgia will use the increased depth to their advantage, as it was something they struggled to find last season. Many college basketball experts see Georgia as a lesser team due to their frontcourt inexperience. It will definitely take time for these freshmen to get past the learning curve, but I believe their impact will be more than expected. If Mark Fox hopes to get to another 20 win season and receive another NCAA Tournament berth, he will need to hope the young guys mature quickly. The veteran leadership is present for Georgia with seniors Charles Mann and Kenny Gaines in the backcourt but also absent in the frontcourt due to the departures of Nemi Djurisic and Marcus Thornton. We shall see how these players perform beginning Friday night at Stegeman Coliseum.