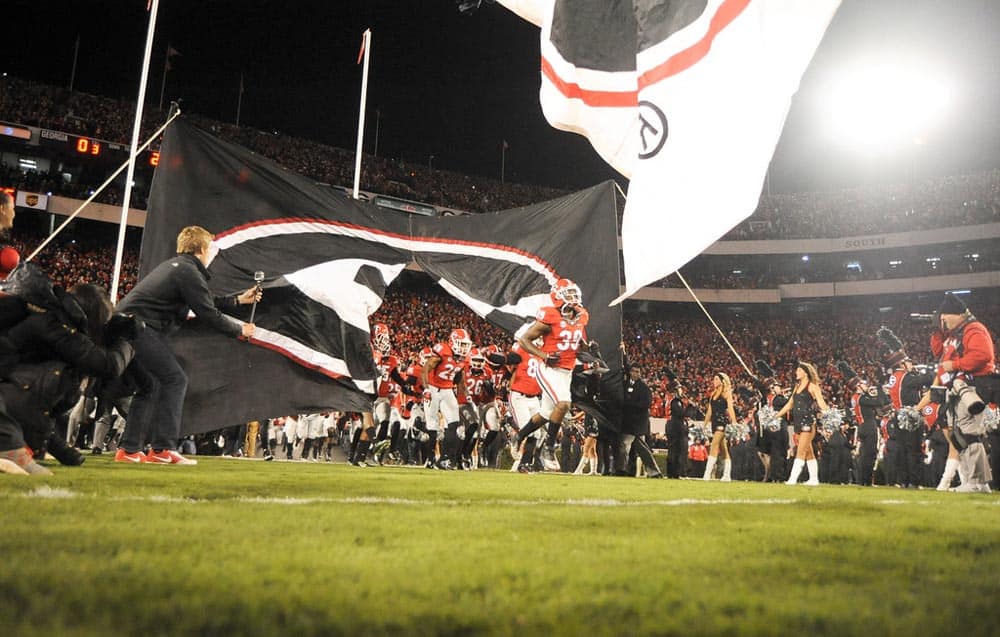 Georgia’s 2015 schedule certainly opened some eyes with a challenging SEC road slate and a matchup against the formidable Alabama Crimson Tide. Their 2016 schedule presents some similar challenges but also has some advantages.

The Bulldogs’ schedule is highlighted by a matchup in Oxford against Ole Miss, and the big rivalries against Auburn and Georgia Tech will take place in Athens. The biggest advantage on paper for Georgia is that 5 of the last 7 games take place in Athens. This should help Georgia immensely in their pursuit to contend for a berth in the College Football Playoff.

Each matchup presents an interesting storyline. Let’s take a look at each matchup and how it may serve as an advantage or disadvantage for Georgia.

9/3 – North Carolina (Chick-Fil-A Kickoff Game in Atlanta, GA)
Georgia makes a trip to the Georgia Dome to open the season for the first time since 2011, when the Dawgs lost to Boise State 35-21. Historically, Georgia leads the series 16-12-2 against the Tar Heels. North Carolina continues to be an ACC team on the rise. I don’t see much of a chance for Georgia to be upset; however it will be an opportunity for freshmen to get their “feet wet” in a significant situation.

9/10 – Nicholls State
Georgia will face the Nicholls State Colonels for the first time in program history. The Colonels play out of the Southland Conference of the FCS. This will serve as an opportunity to warm up for Georgia’s SEC slate.

9/17 – at Missouri
Georgia will make their third trip to Columbia, MO since the Tigers joined the SEC. Georgia will look to go 3-0 in these road conference matchups. Missouri’s defense will be stout as usual, as head coach Gary Pinkel seems to be a defensive mastermind. However, their offense seems to be a downfall. These advantages and disadvantages pose an interesting first SEC test for the Bulldogs.

9/24 – at Ole Miss
Georgia makes a trip to Oxford for the first time since 2011. This seems to be Georgia’s first legitimate test, as the combination of an electric atmosphere and a top tier program may spell trouble for the Bulldogs. Ole Miss will return most of their “Landshark” defense, as well as the experience of QB Chad Kelly. However, with Georgia’s returning experience, this seems to have the potential to become a top SEC matchup in 2016.

10/1 – Tennessee
Georgia welcomes the Tennessee Volunteers for their first SEC matchup in Athens. This should be one of the top matchups within the SEC East this season, as Georgia seeks revenge from a heartbreaker in Knoxville. Both teams will also bring more experience and talent to the table for the 2016 season. This upcoming season is expected to be the signature year for the Volunteers, and it will certainly be interesting to see these two teams face off in one of the most electric atmospheres in college football.

10/8 – at South Carolina
South Carolina is currently entering a period of downfall, having to deal with a coaching change and many inexperienced players. Their inexperience will serve as an advantage for Georgia. However, playing in Columbia is always a challenge, anywhere from the obnoxious “Sandstorm” music to the deafening crowd noise. This matchup should be one of the easier ones in the SEC East but definitely not one Georgia should look past.

10/15 – Vanderbilt
Georgia will welcome a Vanderbilt team who is in the process of rebuilding their program. Commodores head coach Derek Mason will bring in experience on defense, with a mindset that they can take down the Bulldogs. This game will simply be a mismatch, as many will expect Georgia to cruise and tally another SEC East win. However, Georgia fans do not want a repeat of Vanderbilt’s heartbreaking upset in 2013.

10/29 – Florida (in Jacksonville, FL)
Georgia will add another installment to the rivalry formerly known as the “World’s Largest Outdoor Cocktail Party”. This rivalry is so intriguing because an accurate outcome is rarely predicted, no matter the skill of each team. However, both teams should be near the top at this time next season. Florida will have Will Grier back by this game, as well as many other talented recruits and players to surround him. This matchup should be a classic as usual, quite possibly the most intriguing on the schedule.

11/5 – at Kentucky
In 2014, Georgia went into Lexington and clobbered the Wildcats by a score of 63-31. This should not be the case this go around. Kentucky seems to be on the rise every season under head coach Mark Stoops. They are known for their talent behind center and speed surrounding him. This game may be a trap game for Georgia, as they will have to fight to escape a redesigned Commonwealth Stadium and a fan base backing the Cats.

11/12 – Auburn
Georgia will host Auburn in the highly acclaimed rivalry game for their last conference game in Athens. Georgia last beat Auburn in Athens in 2014 by a score of 34-7. It could very well be a similar tale again, as Auburn struggles at quarterback and defensively. Auburn could completely turn it around after a struggling 2015 campaign, but it’s very possible we see more of the same from them in 2016.

11/19 – UL Lafayette
Georgia welcomes Louisiana-Lafayette in a game they will not want to look past. The Ragin’ Cajuns are typically a strong opponent in the Sun Belt Conference and seem to be in a bowl game year in and year out. Georgia has only faced ULL one time in program history, beating them in 2010. If Georgia executes as they should, this game serves as a tuneup game for Georgia Tech the following week.

11/26 – Georgia Tech
The “Clean Old-Fashioned Hate” never fails to disappoint. Georgia Tech will bring in their traditional option attack, which always seems troublesome for Georgia. GT’s success seems to never be predictable. They are up and down every year under Paul Johnson. Despite that, it should be a nail biter as it always is. This game should be highlighted on the final week of the regular season.

Georgia’s 2016 football schedule seems fairly reasonable on paper, after a 2015 season with many challenges. As always, Mark Richt will be pressed with the expectation to go all the way. I believe with a potential star quarterback under center in Jacob Eason and highly acclaimed recruits in many positions, this may be Georgia’s chance to make a significant run.

This will only happen however, if Coach Richt and his players execute to the best of their abilities. It seems that the 2016 season will be filled with excitement and hype all around the SEC. As soon as the 2015 campaign is concluded, we will all be waiting to watch Georgia in 2016, setting a high bar for success.