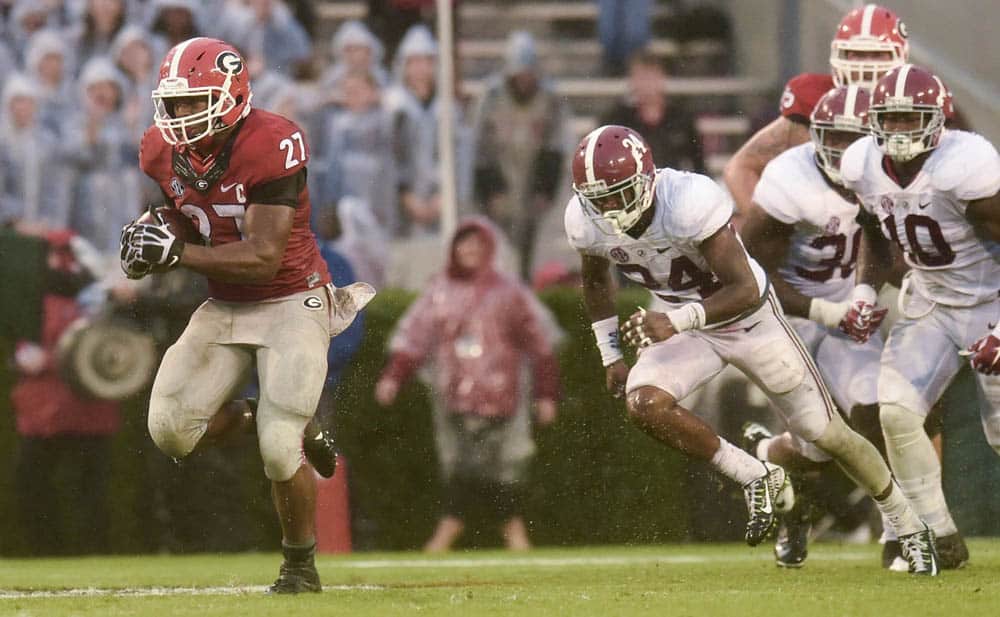 Running back Nick Chubb broke off an 84-yard run late in the third quarter to push himself over 100 yards on the ground for the day. That marks the 13th-straight game Chubb has rushed for over 100 yards tying Herschel Walker’s mark for consecutive 100-yard rushing games.

Head coach Mark Richt was disappointed with the outcome and is ready to get back to work for next week.

“The dam broke and unfortunately we just didn’t have enough counterpunches to get back in it,” Richt said. “First, give them credit for the job they did. I’m disappointed for us as a team, players and coaches, but I know our fans are sick about it and I don’t blame them. It’s no fun to have that kind of performance. But it’s a long season and we have to get ready for the next one. We’ve got to make a lot of corrections and get back on track.”

Georgia was outgained 379-299 by the Crimson Tide in total yards. The Bulldogs were led by Nick Chubb who finished the game with 146-yards rushing. Sophomore Sony Michel added 53 yard of his own. Both Greyson Lambert and Brice Ramsey saw action combining for 106 yards through he air.

Alabama scored the game’s first points hitting a 29-yard field goal 11 minutes into the game. The Bulldogs answered with a field goal of their own early in the second quarter. The Crimson Tide scored the game’s next 35 points, before Chubb broke off his 84-yard touchdown run.

Georgia is back in action next weekend when the team is scheduled to travel to Knoxville, Tennessee to take on the Tennessee Volunteers on Saturday at 3:30 p.m. ET in a nationally televised game on CBS.

*Chubb Hits Century Mark For 13th Time: Sophomore TB Nick Chubb matched Herschel Walker’s school record mark of 13 consecutive games with at least 100 yards rushing after going for 146 yards on 20 carries (7.3 avg.) and a touchdown. Chubb is only the 16th player to have at least 100 yards against Alabama’s defense since 2005. With Walker in attendance, he highlighted his performance with an 83-yard touchdown at the end of the third quarter, which equaled his previous long run set against Charleston Southern in 2014. Those are the eighth-longest rushing touchdowns in school history. Chubb is the active FBS leader with 13 consecutive games with at least 100 yards. He moved up to ninth in school history in career rushing yards now with 2,292.

*Marshall Puts Bulldogs On The Board: Senior PK Marshall Morgan connected on a 27-yard field goal early in the second period to even the score at 3-all. Morgan has now scored the third-most points in Georgia history (354) and is 5-for-7 on field goals this season and 51-for-66 in his career. Coming into today, Morgan was fourth for NCAA active players in points. Also of note, Morgan set an SEC record for career PATs made with 202.

*Series History: After today’s 38-10 decision by Alabama, the Crimson Tide lead the series 38-25-4. The series is 2-2 in Sanford Stadium when both teams are ranked in the top 25. Under Mark Richt, the Bulldogs are 3-3 against Alabama.

*Last Time: The Tide blocked Collin Barber’s punt from Georgia’s 16-yard line late in the second quarter and ran the loose ball in for a touchdown to give Alabama a 17-3 edge. The last time a Bulldog opponent blocked a punt and took the ball for a touchdown was in 2013 by Tennessee’s Devaun Swafford.

At the beginning of the third quarter, Alabama’s Eddie Jackson intercepted a Brice Ramsey pass and returned it 50 yards for a touchdown. The last time an opponent had an interception and returned it for a score was in 2013 when Nebraska’s Will Compton went 24 yards for a touchdown following a pick. Ramsey finished the game 1-for-6 for 20 yards and two interceptions while junior QB Greyson Lambert started the game and went 10-for-24 for 86 yards and one interception.

*Points off Turnovers: The Bulldogs are even in turnover margin for the season after recovering two fumbles today but giving up three interceptions and having a fumble. Georgia has scored 24 points off seven turnovers while opponents have scored seven points off seven Bulldog miscues. Senior OLB Jordan Jenkins forced a fumble that senior N Chris Mayes recovered early in the first quarter. Georgia punted at the end of the next series. Late in the third quarter, senior ILB Jake Ganus ripped away a loose ball to give the Bulldogs another possession. On the next series, Lambert fumbled the ball right back to Alabama. Ramsey also threw a pair of picks while Lambert had one. The Tide scored seven points off one of the picks on a 50-yard return.

*Injury Report: Sophomore Isaiah McKenzie sustained a left hamstring injury on a kickoff in the second quarter and did not return.

*For Starters: True freshman DT Trenton Thompson started for the first time in his career. The Bulldogs have had five true freshmen starters this season and 10th first-time starters in 2015.

*Helmet Sticker: The Bulldogs are wearing a “33” decal on their helmets in honor of Southern University’s Devon Gales, who sustained a spinal cord injury during his team’s game against the Bulldogs last weekend in Athens.

On the loss to Alabama …
“The dam broke and unfortunately we just didn’t have enough counterpunches to get back in it. First, give them credit for the job they did. I’m disappointed for us a team, players and coaches, but I know our fans are sick about it and I don’t blame them. It’s no fun to have that kind of performance. But it’s a long season and we have to get ready for the next one. We’ve got to make a lot of corrections and get back on track.

“We got whipped, we all know it and we’ve got to do something about it. We’ll watch the film and face the truth and look at ways we can improve. We as coaches have to make decisions to do that.”

On getting ready for the next game …
“It’s one day, it’s one game, no doubt it’s hurtful, but the only choice we have is to get back in there and start swinging. It’s business as usual. We’ve got to look at the film and come up with the best plan possible that give us the best chance to win. Then we’ve got to execute it. Without execution, it’s tough. We’ve got to continue to learn and get better at it. … Our goal is to get better. We’ve got to get back in there and find a way to improve in every area of our game.”

On using both quarterbacks …
“Part of it was just trying to get a little spark. It was a wet day and it’s hard to handle that wet ball, but Brice (Ramsey) has always thrown a wet ball pretty well. That was part of the thinking. … It’s tough to throw and catch in that kind of weather. And it’s tough the mount a comeback in that kind of torrential downpour.”

On Saturday’s game vs. Alabama…
“It was a tough one. My hats off to their defense. They came ready to play, and we just did not execute – whether it was communication or X’s and O’s we did not do our job.”

On Alabama’s defense being tough to play in the rain… “We knew they had a good defense and we were going to have to bring our A game. There’s no excuses. We were able to practice in the rain all week and we have to do a better job of holding onto the football.

On the goal of winning the SEC East…
“We aren’t just going to tuck our tails because we lost the game. The (SEC) East is still open and we have plenty to play for. We have to keep our heads up and keep going.”

On Alabama’s defense …
“Those guys are big and physical. I know they were coming down hill strong and tackling us pretty well.”

On the defense’s performance on Saturday vs. Alabama…
“As a defense, we know that we did not play Georgia football today and we have to work on that right away.”

On the interception return for a touchdown to begin the second half…
“As a defense you can’t let that affect you. You have to keep moving on and let that motivate you the rest of the game.”

On the goal of winning the SEC East…
“Until someone says we have no chance, we are going to keep fighting.”

On moving on from today’s game…
“We will wash it off pretty quickly. In this league you can’t focus on one game for too long, so we will watch film, learn from it and move on.”

On what went wrong on Saturday…
“We did not execute in every facet of the game. It comes down to blocking, tackling and making plays, and we did not do that today. We will see what happens on film and fix it.”