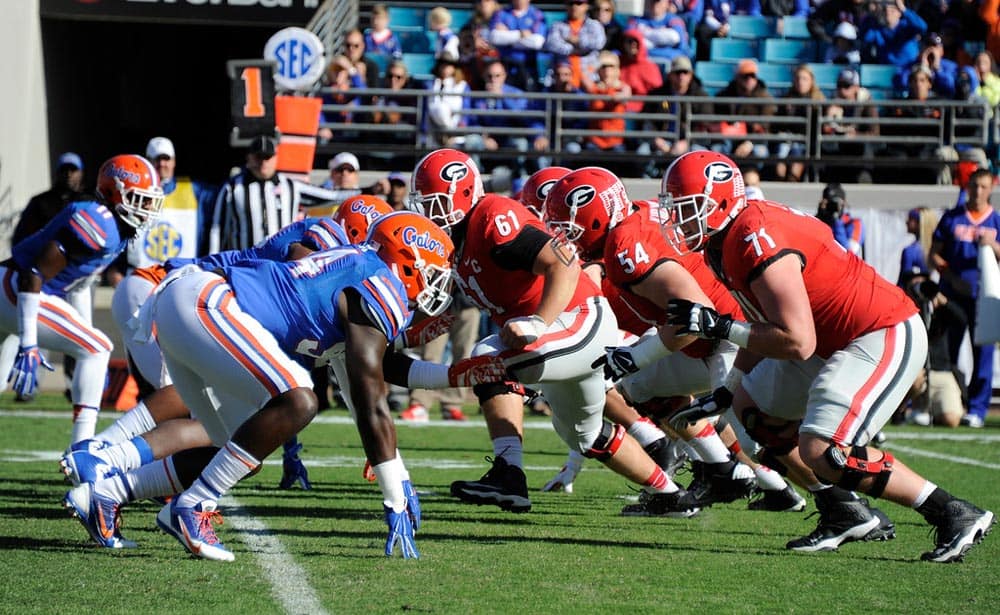 ATHENS, Ga. – Coming off their bye-week, the Georgia Bulldogs will take on the 11th-ranked — and Southeastern Conference division rival — Florida Gators.

The game will be played at the neutral site of Everbank Stadium in Jacksonville, Fla. On Sunday, head coach Mark Richt called the rivalry “electric.”

“It’s a great venue. It’s a great crowd. It’s electric; like no other game,” Richt said. “Whoever’s got the ball, somebody’s getting rowdy on the other side. It’s just non-stop. It is a lot of fun, there’s no doubt.”

The Gators currently sit atop the SEC East division standings with a 6-1 record. Richt said he thinks first-year head coach Jim McElwain is doing a “great job” getting everybody on the same page and playing as hard as they can.

Last year, unranked Florida defeated the then 11th-ranked Bulldogs by a final score of 38-20; the Gator offense rushed for over 400 total yards.

“None of us would’ve predicted that going into the game,” Richt said of last year’s outcome. “But they found something that was working. And when it’s working and you get momentum doing it, then you keep doing it until the other team can stop it. We just didn’t do a very good job of that at all last year.”

Sophomore defensive back Dominick Sanders will have to sit out the first have due to a suspension for targeting in the Missouri game two weeks ago. Richt said they’ll have to figure out who they’ll work at that position in Sanders’ absence, but guys like Johnathan Abram, Quincy Mauger and Aaron Davis have all “gotten some reps back there.”

Because the game is played at a neutral site, Richt said both teams have to be concerned about the noise.

“No matter where you play, it’s the same for both teams,” Richt said. “It is a little bit different in that every time you go to Jacksonville, you’ve gotta be concerned about the noise from an offensive standpoint. Both teams need to be concerned about that; have all their nonverbal communication ready to go like you would at an away game. So in some ways you feel like you’re at home and in others, you feel like you’re away.”

Though the Bulldogs think every game is a “big game,” this one has more riding on it when it comes to the division standings.

“Yeah it’s a big game, certainly,” Richt said. “We think they’re all big. This is one that everybody always gets excited about regardless of the record, but now it has a lot of meaning when it comes to the Eastern division race as well.”

Kickoff for Saturday’s game is set for 3:30 p.m. and it will be nationally televised on CBS. This will be the fourth time that Georgia has been on CBS in the 3:30 time-slot this season.