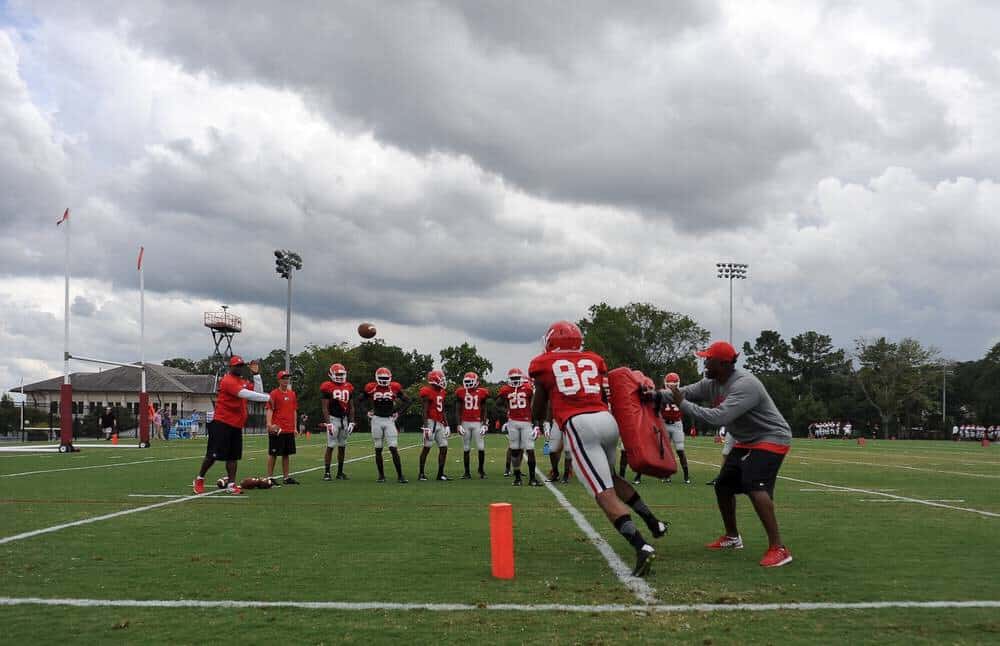 ATHENS, Ga. – Rainy weather forced the Georgia Bulldogs to improvise for their 14th football practice of the pre-season period.

The team bussed 41 miles to the Atlanta Falcons’ training facility in Flowery Branch, where their hosts had just broken camp in advance of their next exhibition game. It rained hard as the Bulldogs departed Athens, and the two-hour workout was punctuated by a downpour that pounded the roof of the Falcons’ indoor practice building.

Still, the Bulldogs were able to put together a productive workout, despite surroundings that were unfamiliar to a large number of players that had never been to Flowery Branch.

”Practice is practice, no matter where it is” said sophomore cornerback Malkom Parrish. ”Even with all this rain, we’re still able to get everything done that we needed to. We’re able to move in practice at a fast pace with a good tempo.”

”It (different practice field) was not much of a distraction,” said redshirt sophomore corner Reggie Wilkerson. ”We’ve just got to go to work, wherever we are. The field was a little bigger and a little wider, but we got used to it quick enough. Everybody is getting same number of reps. Everybody’s competing. It means a lot to me to have a lot of guys that can play, knowing that if somebody goes down, somebody is ready to step in. It’s all about playing ball and having fun.”

Georgia will continue to practice daily in full pads for the remainder of this week. Its next off day will come this Sunday. The ninth-ranked Bulldogs open the season in Athens against Louisiana Monroe on Saturday, Sept. 5, at noon on the SEC Network.