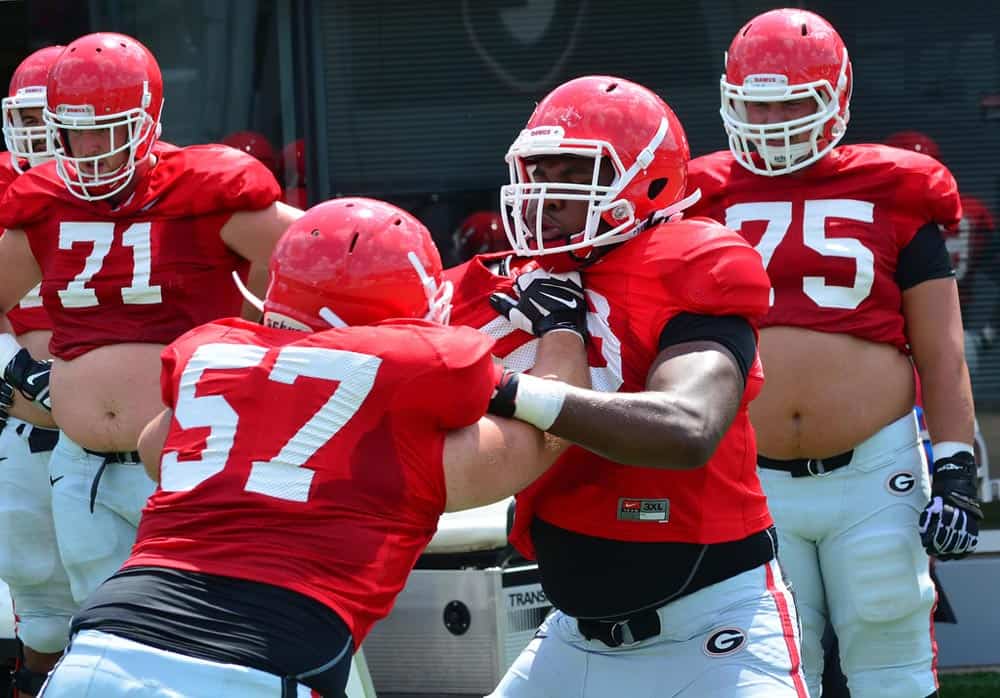 ATHENS, Ga. – The Georgia football team continued its preseason camp Saturday afternoon as the Bulldogs practiced in full pads for the first time. Saturday’s session was the fifth practice for the 2015 Bulldogs.

“This was practice number five, the first one in pads, and it was a very hot day,” head coach Mark Richt said. “I’m sure everyone in the Southeast is dealing with it. We have a group of guys who are really pushing through it and giving good effort and trying to learn what to do. Some of them are reviewing and some of them are perfecting. We have guys at different stages of development. We are practicing a lot of times with as many as four groups. We have a lot of guys getting reps. There is a lot of film to review. I think the five days of one-a-days will help us to do better when it comes to installation. We did some red zone today and some one-minute offense and got that off the ground.”

Following Saturday’s workout, Richt was asked about the progress of Georgia’s wide receivers through five practices.

“Compared to spring we have a good number of guys out there, and it’s really helping them,” Richt said. “When we spread to three and four groups, it makes that depth thin. It’s good to see that many guys out there. As a unit, we need to catch the ball better overall. I think we’re going to be a pretty athletic bunch, but there is still a lot of learning going on with the young guys, and we’re still trying to get better at what we do. Right now I’m pleased with the unit.”

Richt also noted that sophomore wide receiver Isaiah McKenzie did not practice due to a pulled hamstring, and senior defensive tackle James DeLoach was held out due to a fracture in his hand. It was also announced Saturday that redshirt freshman linebacker Detric Bing-Dukes has decided to transfer to another institution seeking an opportunity for more playing time.

The Bulldogs will practice for the sixth consecutive day on Sunday, and following a full week of practice, the annual Fans’ Picture Day will be held Saturday, Aug. 15, in the Reed Plaza area of Sanford Stadium and will feature Richt, football players, cheerleaders, other UGA athletic teams, as well as “Que,” grandson of mascot UGA IX and a candidate to become UGA X.

Special ticket coupons are required for access to the location for Coach Richt and “Que.” Those tickets will be distributed to the first 150 fans at 10:00 a.m. from the East End ticket windows on East Campus Road.

The No. 9 Bulldogs open their 2015 schedule Sept. 5 when they play host to Louisiana-Monroe at noon Eastern. The game will be televised by the SEC Network.