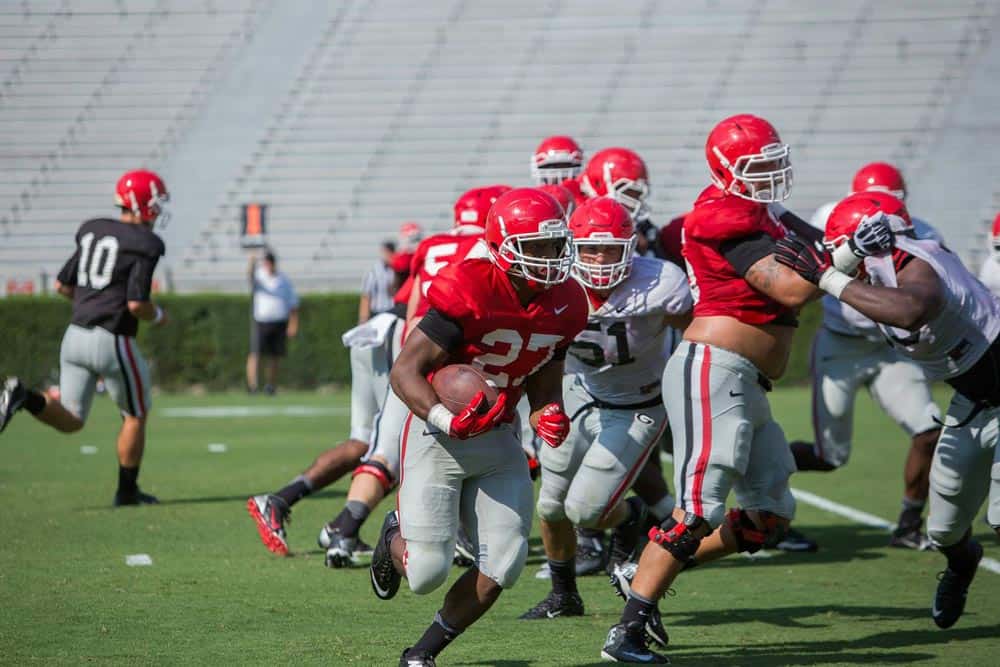 One of the top storylines during the preseason is the quarterback battle featuring junior Faton Bauta, junior Greyson Lambert and redshirt sophomore Brice Ramsey. No statistics were kept during Friday’s action, and Bulldog head coach Mark Richt said all three quarterbacks had bright moments.

“It’s a tight race, there’s no separation at this point,” Richt said. “There’s a method to the madness. We’ll go back and watch the film and continue to evaluate all three of them. It was very equal on reps today, and it’s not a huge landslide with one guy.”

The Bulldogs ran approximately 50 to 60 plays with the number one and two units while the third team managed to get in at least 32 plays. Richt credited the team’s depth and relatively healthy roster at this point with being able to scrimmage that amount. All three of the aforementioned quarterbacks threw the deep ball well and had at least one go for either a touchdown or a big gain.

When asked what would be his biggest concern at this point in the preseason, Richt said the number two offensive line is not ready to play winning football right now but they are getting better.

“They’re developing and learning, however today when there was a lot of edge pressure like with Lorenzo Carter, there were several sacks,” Richt added.

Georgia will return to practice Monday when the fall semester begins.

The annual Fans’ Picture Day will be held Saturday in the Reed Plaza area of Sanford Stadium and will feature Richt, football players, cheerleaders, other UGA athletic teams, as well as “Que,” grandson of mascot UGA IX and a candidate to become UGA X.

Special ticket coupons are required for access to the location for Coach Richt and “Que.” Those tickets will be distributed to the first 150 fans at 10 a.m. from the East End ticket windows on East Campus Road.