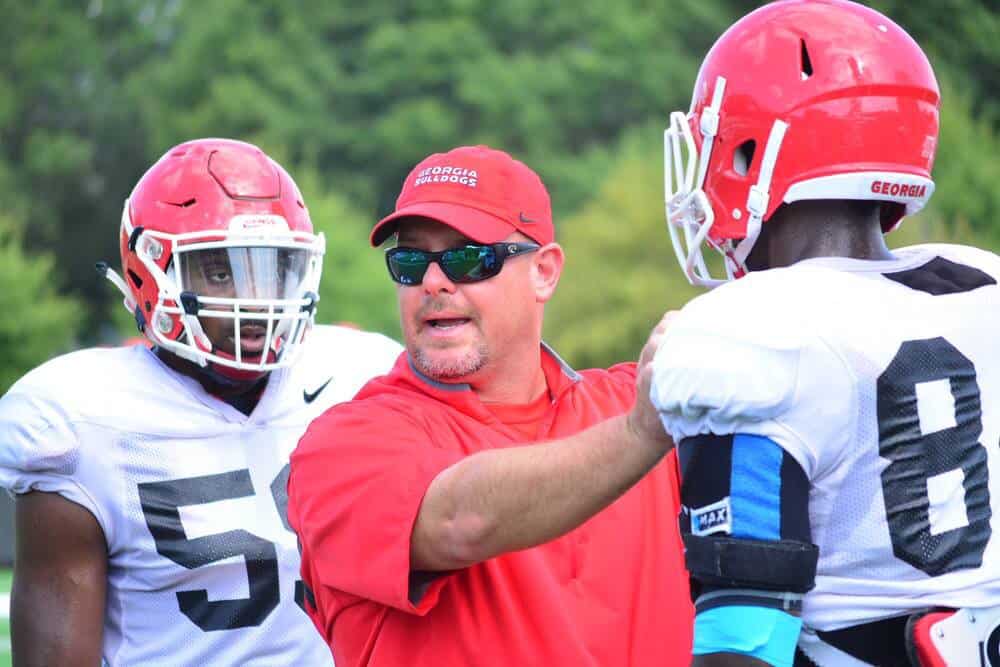 ATHENS, Ga. – The No. 9-ranked Georgia Bulldogs practiced for just under two hours in full pads on Monday afternoon, their 18th session of fall camp. Following the workout, Georgia defensive coaches Jeremy Pruitt and Kevin Sherrer met with the media to discuss the team’s progress to date.

Pruitt was asked to assess the defense as his second season as the Bulldogs’ coordinator approaches.

“We’re very inexperienced,” Pruitt said. “You’ve got Jordan Jenkins and you’ve got Leonard Floyd. That’s the two guys who have played a lot of football. Dom Sanders started every game last year. Besides those three guys, there’s a couple of guys who have started some games here. Other than that, there’s not a whole lot of experience. We’ve tried to define our expectations for the guys daily and create goals that they can accomplish each day. We’re building. That’s where we’re at right now.”

“We’ve still got guys jockeying for positions, with the 1s, 2s and 3s” Pruitt said. “We’re still wide open. We’re still in camp right now. We have 17 new guys, 16 freshmen and one junior college guy. Several of those guys are probably going to be in the two-deep. Every day is like a Monday for them, but they have good attitudes and are working hard at it.”

Sherrer, who coaches Georgia’s outside linebackers and the star position, was asked about his duties as the defensive staff’s representative in the coaches’ box on game days. Pruitt, defensive line coach Tracy Rocker and inside linebackers coach Mike Ekeler are on the field during games.

“I’m sort of (Coach Pruitt’s) eyes in the sky you might say,” Sherrer said. “I give him down and distance and where the ball’s at and what’s going on. I try to give him a feel for things. If it’s a good play or a bad play, tell him what happened for us. From the offensive perspective, I try to call out the personnel and the formation. Some times it’s easier to see upstairs where you have a pretty good view. There will be times when I make a suggestion, but he knows what we’re doing overall. We all kinda have a voice in the matter, ‘Rock’ and ‘Ek’ and everybody. Our graduate assistants will help with some of those things. Everyone sort of has a part and then it all comes together, in between series too.”

The Bulldogs will open their 2015 campaign in 12 days when Georgia hosts the University of Louisiana at Monroe at Sanford Stadium. Kickoff on Sept. 5 is set for noon and the contest will be televised nationally on the SEC Network.