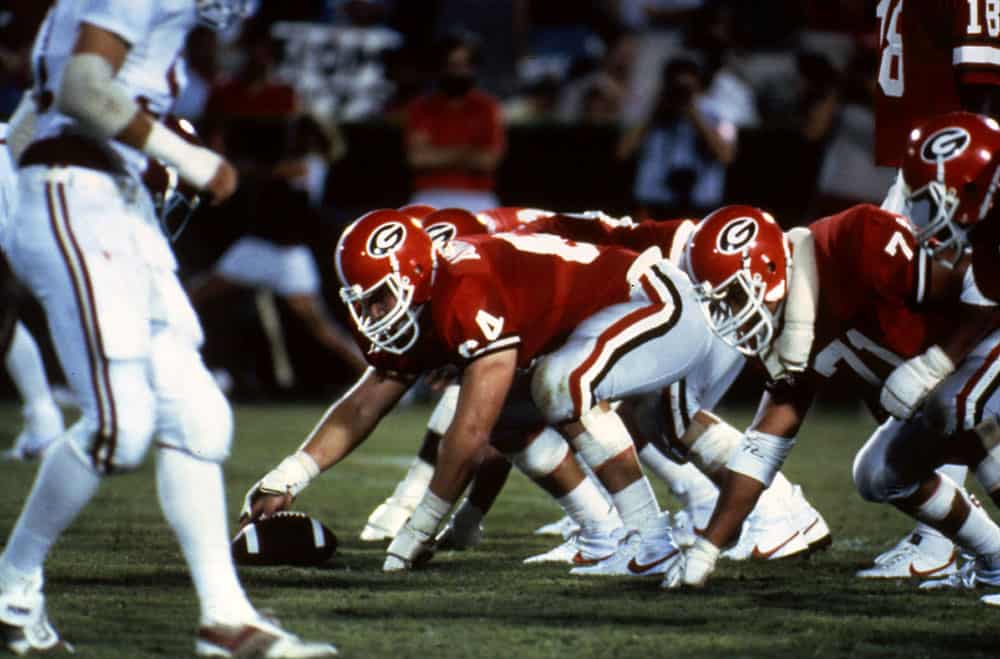 ATHENS, Ga. – Football All-American Peter Anderson and national champions Matias Boeker of tennis, Leah Brown of gymnastics and Maritza Correia McClendon of swimming have been chosen for induction into the University of Georgia’s Circle of Honor.

Anderson, Boeker, Brown and Correia will be inducted formally during the Circle of Honor Gala on Feb. 12, 2016.

The Circle of Honor is designed to recognize and pay tribute to extraordinary student-athletes and coaches who by their performance and conduct have brought honor to the university and themselves, and who by their actions have contributed to the tradition of the Georgia Bulldogs. The criteria also stipulate that each recipient has earned his or her academic degree.

A native of Glen Ridge, N.J., Anderson anchored the Bulldogs’ offensive line at center from 1983-85 and garnered consensus All-America honors as a senior. In 1985, he became the first Vince Dooley-coached player to be named the team’s permanent captain at mid-season (an honor usually reserved until the end of the season). Anderson was an All-SEC choice in 1984 and 1985.

Anderson was named the Atlanta Touchdown Club’s Southeastern Lineman of the Year and was chosen as the team’s Most Outstanding Offensive Player in 1985. He also won the 1985 Evans Johnson Award as the player recognized by the coaches as exhibiting leadership, loyalty, dedication and sportsmanship and the William K. Jenkins Award as the team’s Most Valuable Lineman.

Anderson was chosen as the Associated Press Southeastern Lineman of the Week in 1984 for his performance against Clemson in which he played center, guard and tackle all in the same game. He also earned the CBS Most Valuable Player recognition against Clemson in 1985 when he recovered a fumble in the end zone for a touchdown. Anderson was inducted into the Georgia-Florida Hall of Fame in 2013.

He earned his degree in Business Education in 1987.

After being named the SEC Freshman of the Year in 2000, Boeker, a native of Buenos Aries, Argentina, completed the program’s first triple crown of tennis — and only the third in NCAA history — in 2001 as he helped guide Georgia to its fourth national championship while winning both the NCAA singles and doubles titles.

In his final season in 2002, Boeker won the NCAA singles crown for the second straight year. Boeker was honored as the ITA National Player of the Year and as the SEC Player of the Year. He played most of that spring — and most of his career for that matter — in the No. 1 singles and doubles spots, earning All-America honors in both positions.

Boeker, who also was an All-American as both a freshman and sophomore, became only the ninth Bulldog to garner All-America accolades at least three times.

Boeker graduated in 2007 with a degree in International Business. He earned his dual degree (MBA and MA in International Studies) in 2014 from the Wharton School of Business at the University of Pennsylvania.

Brown helped Georgia win conference team crowns in 1994, 1996 and 1997. She was the first gymnast in NCAA history to score a 10.0 in her first collegiate meet and she went on to boast 19 in her career (16 on vault, three on floor). Brown also was the first Georgia freshman to win the SEC all-around title, doing so in 1994.

Brown was a two-time Academic All-SEC selection and she was a member of Leadership UGA and Student Athletic Council leadership organizations and the prestigious Omicron Delta Kappa, Blue Key and Palladia honor societies. She won the Arthur Ashe Award for Black Issues in Higher Education in 1995 and was selected as a finalist for the state Sportswoman of the Year in 1995.

Brown has served two tours of duty in Afghanistan as an orthopedic surgeon in the Navy. She was awarded the Bronze Star for her humanitarian efforts treating women and children in Afghanistan.

Brown graduated in 1998 with a degree in Genetics. She earned her medical degree at Ohio State and the Cleveland Clinic Foundation in 2003.

Correia was born in Puerto Rico after her parents relocated from Guyana. As a child, she was diagnosed with scoliosis and her doctor recommended swimming as a treatment. In 1990, when Correia was nine, her family moved to Tampa, Fla., where she embarked on a record-setting high school and juniors career.

Correia graduated in 2005 with a degree in Sociology.