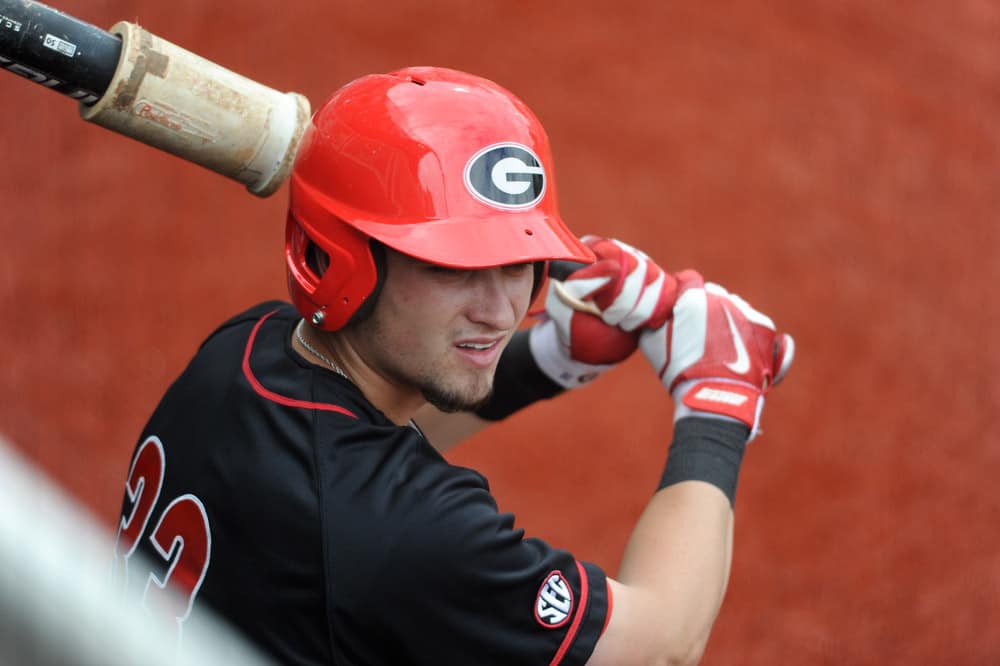 ATHENS, Ga. – A five-run outburst with two outs in the 10th inning rallied Georgia past Kentucky 6-1 Sunday to win an SEC road series.

After two quick outs in the 10th, Bulldog sophomore Stephen Wrenn kept the inning alive with a base hit and went to third when Keegan McGovern lined a single. Senior Jared Walsh drew a walk to load the bases for junior Daniel Nichols. He lined a two-run single to center to make it 3-1. Then, junior catcher Zack Bowers stepped up and crushed a three-run home run for a 6-1 advantage. That was more than enough for junior Sean McLaughlin who took care of the Wildcats in the 10 to finish with four scoreless innings and a victory to move his record to 4-5.

With the win, Georgia improved to 24-26 overall and 9-17 in the SEC. Kentucky (27-23, 12-14 SEC) took a 1-0 lead on a two-out, solo home run by JaVon Shelby in the fourth off sophomore Robert Tyler. It came on a full count and marked his first hit of the weekend and his eighth home run of the year. The Wildcats carried a 1-0 lead until the ninth.

In just his second start since February as he’s been sidelined with a forearm strain, Tyler provided five innings against the Wildcats. He limited them to a run on two hits with no walks and four strikeouts and got a no decision. Freshman Bo Tucker and McLaughlin combined to pitch five scoreless innings for the Bulldogs.

In the top of the ninth, Walsh spoiled the shutout bid when he blasted his third home run of the year off right-hander Kyle Cody. It ended his day after going eight innings and scattering seven hits with no walks and five strikeouts.

“We hung in there, Cody was really good, a potential first round pick for Kentucky and Robert Tyler was excellent for us too,” Georgia coach Scott Stricklin said. “We had a big, two-out, bases-loaded hit, and it was Daniel Nichols, and then Zack Bowers had the three-run home run which was really big too. I thought our defense was exceptional.

“Everything is in front of us to play for; we told them before the game that we have to win today, and I’m proud of how we got it done. That’s what we needed,” Stricklin added.

Georgia returns to action Tuesday for the 13th annual Spring Baseball Classic at Turner Field against Georgia Tech. First pitch will be at 7 p.m. and be televised by Fox Sports South. The Bulldogs close out the SEC regular season by playing host to No. 20 Arkansas starting Thursday night at Foley Field.