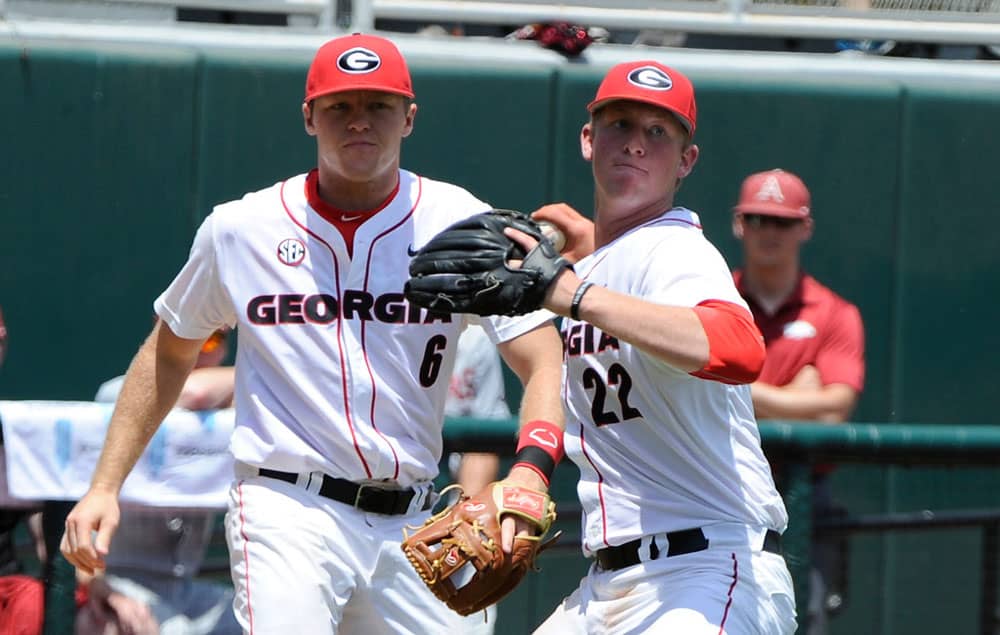 The Bulldogs (26-28, 10-19 SEC) were eliminated from a potential SEC Tournament berth following the loss and a victory by Tennessee on Saturday.

“I thought they had a really good approach against Robert Tyler,” Georgia head coach Scott Stricklin said. “They put some pressure on him and put the ball in play. They got some bounces, but they had some hard hit balls too. They just outplayed us these last two games…It’s a long season and sometimes it seems like it comes down to the last day, and this is certainly the case, but all of the games before this put us in this spot.”

Arkansas (33-20, 17-12 SEC) used the first three innings to jump out to an insurmountable lead. The Razorbacks put up eight runs in the first three runs off of Tyler, who dropped to 1-1 on the season. Arkansas’ James Teague (4-3) earned the victory after pitching 4.1 innings of three-hit ball. Tyler Spoon, Brett McAfee and Carson Shaddy had two RBI apiece to pace the offense.

All five Georgia seniors contributed in their final game at Foley Field. Co-captains Brandon Stephens (double) and Jared Walsh (triple and run scored) each had an extra-base hit, while Jared Cheek, Zach Waters and Taylor Hicks combined to allow only three hits in 5.1 scoreless innings pitched. Freshman Bo Tucker accounted for the other inning of relief as Tyler was lifted after 2.2 innings.

With a stolen base in the first inning, Georgia sophomore Stephen Wrenn moved into sole possession of fourth place with 28 in a single season. Sophomore Skyler Weber notched Georgia’s lone RBI on the day. Also, Wrenn led the Bulldogs in batting (.324) and tied for the team high in home runs (8) with Zack Bowers. Weber finished with a team-best 36 RBI. Walsh ended the year as the top pitcher at 5-2 with a 2.60 ERA while Cheek led the team in saves with six to go with a 2-2 record and 2.34 ERA.