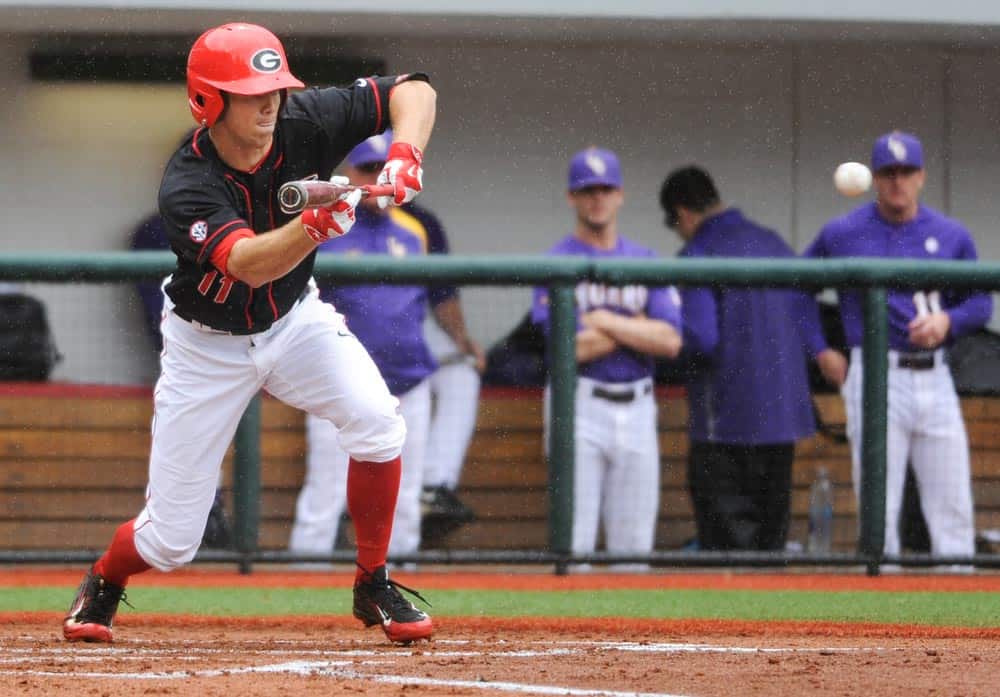 The Tigers took a 1-0 lead in the first on a two-out RBI-single by Conner Hale. Georgia answered with a leadoff home run by Nick King, his first of year. It was the first career home run allowed by Lange who came in with a 1.39 ERA in 51.2 innings pitched. In the fifth, a wild pitch by Lawlor made it 2-1. In the seventh, the Tigers got a two-out, two-run double from Kade Scivicque to extend their lead to 4-1. The Tigers scored all four of their runs with two outs. Bulldog sophomore centerfielder Stephen Wrenn went 0-for-4 in the first contest, marking the first time he failed to reach base in a game this year, ending the streak at 38 games.

In game two, the Tigers took a 2-0 lead in the second. Scivicque extended his hitting streak to 23 games with a one-out, solo home run, his fifth of the year. A safety squeeze bunt was executed by Chris Sciambra to make it 2-0, allowing Andrew Stevenson to score as he was on after a double and took third on an infield hit by Chris Chinea. The Bulldogs got a run back in their half of the frame when junior Zack Bowers blasted his team-leading seventh home run. In the fourth, LSU loaded the bases with nobody out, and junior right-hander Sean McLaughlin managed the jam, allowing just a sacrifice fly to Chinea. The Tigers loaded the bases in the sixth and pushed across a run on a passed ball for a 4-1 lead. LSU added two runs in the seventh and three in the ninth for the final.

Sophomore left-hander Jared Poche’ went seven innings for the win to move his mark to 7-1 while Laughlin fell to 3-3. McLaughlin allowed four runs on 10 hits through six innings. Parker Bugg pitched the final two frames for the Tigers.

“Our starting pitchers competed and gave us a chance, but we’re just not scoring a lot of runs right now,” Georgia coach Scott Stricklin said. “It’s tough to win if you’re not scoring. We’ve scored five runs in our last four games, and we’ve had plenty of opportunities for some big innings, and it’s disappointing we’re not hitting in those situations. LSU is a really good team, they hit, pitch and play defense.”