Georgia starts road trip with a 3-2 win over Clemson

Georgia starts road trip with a 3-2 win over Clemson 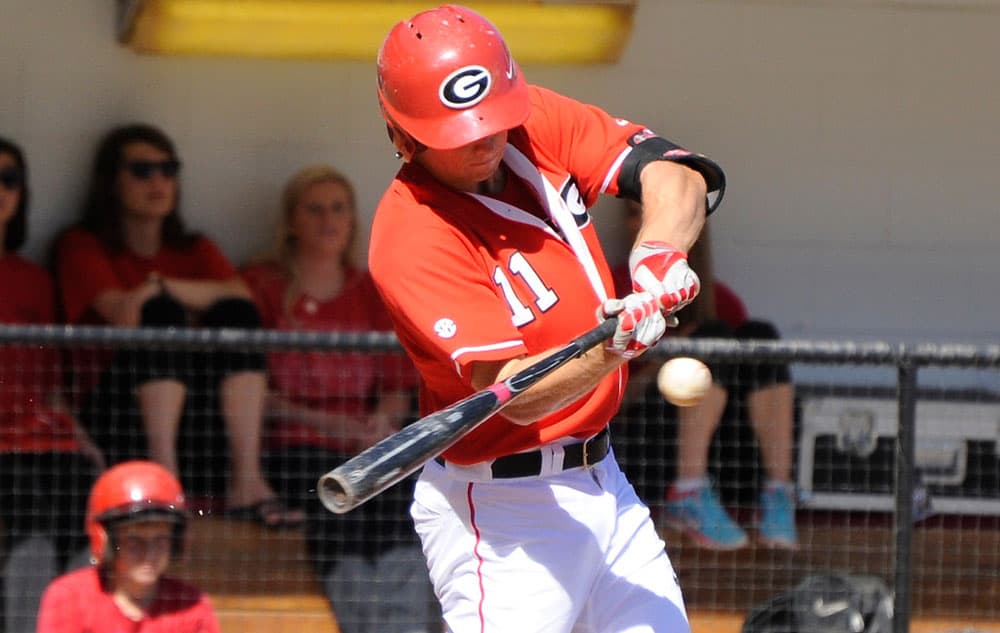 CLEMSON, SC – Georgia started off its four-game road trip on a positive note, posting a 3-2 win over Clemson Tuesday in front of a crowd of 4,598 at Doug Kingsmore Stadium.

For the third time this season, Bulldog sophomore Stephen Wrenn led off a game with a home run. It was the fifth home run of the year for the centerfielder and extended his streak of reaching base safely to all 34 games this season. Wrenn also provided a 1-0 lead courtesy of a leadoff home run in road games at Tennessee and seventh-ranked South Carolina earlier this year. The Tigers tied the game in the second when second baseman Chase Pinder hit his third home run of the year.

Georgia junior right-hander David Sosbee returned to action for the first time since a back injury sidelined him on March 15. In a planned staff night, he went two innings and allowed a run on two hits with one strikeout. Also, senior right-hander Taylor Hicks saw his first action since March 17 as he’s been out with a sore arm. He pitched one scoreless inning before giving way to sophomore Mike Mancuso. The Tigers had a chance to break the game open in the fifth, loading the bases with two outs but Mancuso battled back to strike out Tyler Krieger to keep it a tie game.

In the sixth, the Tigers (16-16) took their first lead on a pinch-hit, RBI-double by freshman Robert Jolly. With one out, Chris Okey and Pinder reached on singles and after a flyout, Mancuso was lifted in favor of senior Zach Waters. Jolly lined an 0-2 pitch to left field for the go-ahead run. Waters came back to register a strikeout of shortstop Eli White to keep it a one-run contest. Freshman left-hander Bo Tucker came in to start the seventh for the Bulldogs and tossed two scoreless innings for his first career win as a Bulldog.

With two outs in the eighth, Bulldog redshirt sophomore Trevor Kieboom tied the game with an RBI-single, scoring Brandon Stephens who was on after a one-out single off Tiger reliever Pat Krall. Stephens had moved in to scoring position on a sacrifice bunt by DJ Smith. Krall had struck out four of the first five Bulldogs he had faced before Stephens. In the ninth, the Tigers brought in Taylor Vetzel.

The Bulldogs (19-15) took advantage of a leadoff error in the ninth as Nick King reached on a miscue by White. King picked up his second stolen base of the night and then advanced to third on a base hit by Wrenn. Skyler Weber provided a sacrifice fly for a 3-2 lead, and on the play Wrenn advanced to third. Vetzel came back to retire Bowers who was called out on strikes and then was ejected by the home plate umpire. Vetzel kept it a one-run contest by getting Daniel Nichols for the final out in the frame.

Georgia looked to senior Jared Cheek, and he took care of the ninth, retiring the first three Tigers he faced to collect his fifth save.

“Both teams had to make a lot of moves tonight, and I was encouraged with how we did on the mound and battled at the plate,” Georgia coach Scott Stricklin said. “It was great to get David Sosebee and Taylor Hicks back, and that’s the best I’ve seen Mike Mancuso pitch. Zach Waters got a big out for us and then Bo Tucker and Jared Cheek finished it up. It was a big night for Trevor Kieboom too, it was his first time back at Clemson where he started his career, and he got the game-tying hit. I told the guys to rally around him because he would be going through some emotions, and they did.”

The Bulldogs return to SEC action Friday at 8 p.m. ET when it travels to Hoover, Ala., for the first of a three-game series with Alabama that will be play at the Hoover Metropolitan Stadium.