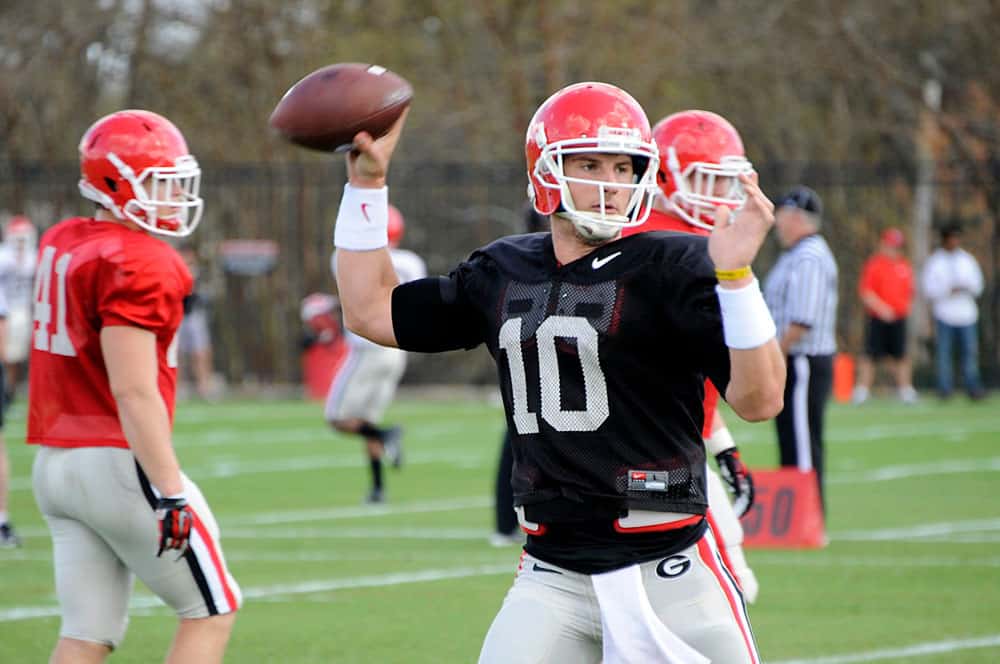 Bauta compiled 250 yards passing, with two touchdowns and an interception, while Ramsey ended the day with 219 yards and a touchdown.

“I thought they both had some good moments and a couple bad moments again,” head coach Mark Richt said. “I couldn’t tell (the completions and attempts were the same) until I looked at the stats. I wouldn’t have been able to predict that. As it went, Faton was a little hotter on the front end, and Brice was a little hotter at the tail end of the scrimmage. They’re getting there. They really are. We’re learning a lot. Of course, the better you protect, the easier it is to prove that you know your progressions and you can get to your second and third guy.”

Turman rushed for 140 yards, with two touchdowns including a 40-yarder. Douglas finished with 99 yards and a touchdown on the ground and four receptions for 39 yards. No other running back had more than three attempts.

“It was a long scrimmage,” Douglas said. “It was a little tough toward the end, but it was fun to get out there and play football and go live and really tackle to the ground. Our offensive line did a good job today. They really made me look good. Give them all the credit. They did a great job opening holes.”

Malcolm Mitchell was the top receiver on the day with six catches for 88 yards, while Isaiah McKenzie, Justin Scott-Wesley, Jay Rome, Jackson Harris and Jeb Blazevich all had three receptions.

“There were some sacks,” Richt said. “There were 10 out of 120 plays, about one every fifth attempt, sixth attempt. That’s not ideal, but overall there were times we did protect well, guys were open and we stuck it on them. We hit some checkdowns. We did some good things.”

Bailey had three tackles, a sack for six yards and two pass break ups on the day.

“I think we went out there and executed, but we still have a lot to work on and fine tune,” Bailey said. “Overall, I think we did a good job of getting out there and getting after the offense. (One of the PBUs) was a third down opportunity for the defense to get off the field. We needed someone to make the play and I just got back there and put pressure on the quarterback and got my hand up to knock the ball down.”

The Bulldogs are a week away from their annual G-Day Game next Saturday at 2 p.m. at Sanford Stadium. There is no cost for admission, but fans are encouraged to bring canned goods for the Food Bank of Northeast Georgia. Donations will be accepted at Gates 2, 4, 6 and 9.

Georgia will kick off the 2015 season against Louisiana-Monroe in Athens on Sept. 5.