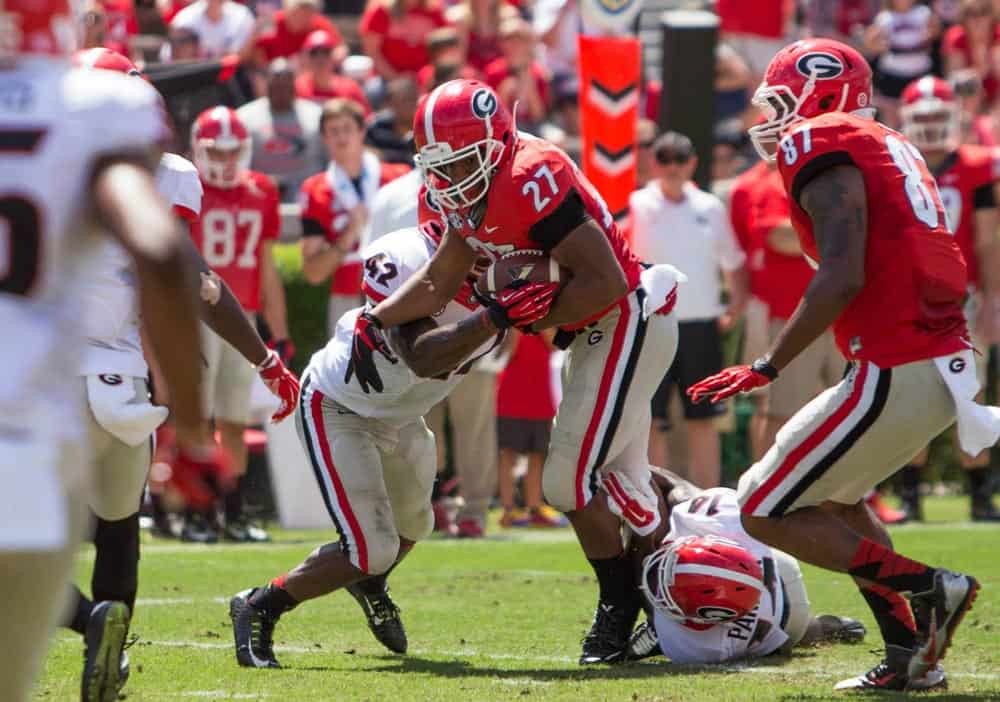 ATHENS, Ga. – Tailback A.J. Turman rushed for 106 yards and two touchdowns to lead the Black team to a 24-17 victory over the Red team in the G-Day Game on Saturday in front of 46,815 fans at Sanford Stadium.

“Georgia won today, which was good,” Bulldogs coach Mark Richt said. “It’s so hard to try and judge what kind of a day it was when you go Georgia against Georgia while working your first, second, and third units because it’s just a lot of guys getting a lot of reps. When things were executed properly on offense, it was pretty to watch. Defensively, I thought that the guys for the most part played well as a unit. They tackled well and batted some balls down at the line of scrimmage.”

“It’s still a race,” Richt said. “I don’t think there’s any question that it will go through the summer and fall before we make that decision on who will start the first ball game.”

Turman carried the ball 26 times, including a 52-yard touchdown run, and averaged 4.1 yards. He had all but six of the Black team’s rushing attempts. Tailback Nick Chubb saw limited action, notching just three attempts for 34 yards and a touchdown for the Red team.

“It was good to get out in front of the fans and play well,” Turman said. “It helped build my confidence up a lot, but I still have a few things to work on to get better. I wasn’t out there to prove anything. I just wanted to play as hard as I could. It felt good running the ball, it felt like high school. … The offensive line has worked hard. I knew my touchdown was coming. They blocked well and opened up a hole for me.”

For the Red team, linebacker Natrez Patrick led the way with eight tackles, including a sack. Tackle Jonathan Ledbetter added seven stops, while defensive back Tramel Terry had six. Defensive back Devin Gillespie, end James DeLoach and nose Chris Mayes all posted sacks as the Red team registered seven tackles for loss. Defensive back Jarvis Wilson had an interception that he returned 53 yards, while DeLoach recovered a fumble.

The Black team struck first when Turman crashed in from a yard out. The touchdown was set up by consecutive passes by Bauta to tight end Jordan Davis and receiver Kenneth Towns covering 18 and 16 yards, respectively. Patrick Beless kicked the extra point for a 7-0 lead at the 7:29 mark of the first quarter.

The Red squad answered on the third play of its ensuing drive as Ramsey hit receiver Isaiah McKenzie on a 72-yard catch-and-run. Marshall Morgan’s PAT tied the score at 7-7 with 6:08 left in the first quarter.

Bauta and Davis connected again, this time on a 25-yard touchdown pass with 11:53 to go in the first half. Beless’ kick gave the Black a 14-7 edge at the break.

Turman pushed the lead to 21-7 when he dashed 52 yards for a touchdown at the 6:25 mark of the third quarter. Beless tacked on the PAT.

The Red team pulled within 21-10 as Morgan connected on a 25-yard field goal with 4:19 left in the third quarter. The score was set up by Ramsey’s 60-yard pass to receiver Reggie Davis.

After a fumble on the ensuing drive, tailback Nick Chubb scored on a 17-yard run. Morgan drilled the extra point to make it 21-17 with 2:09 remaining in the third quarter.