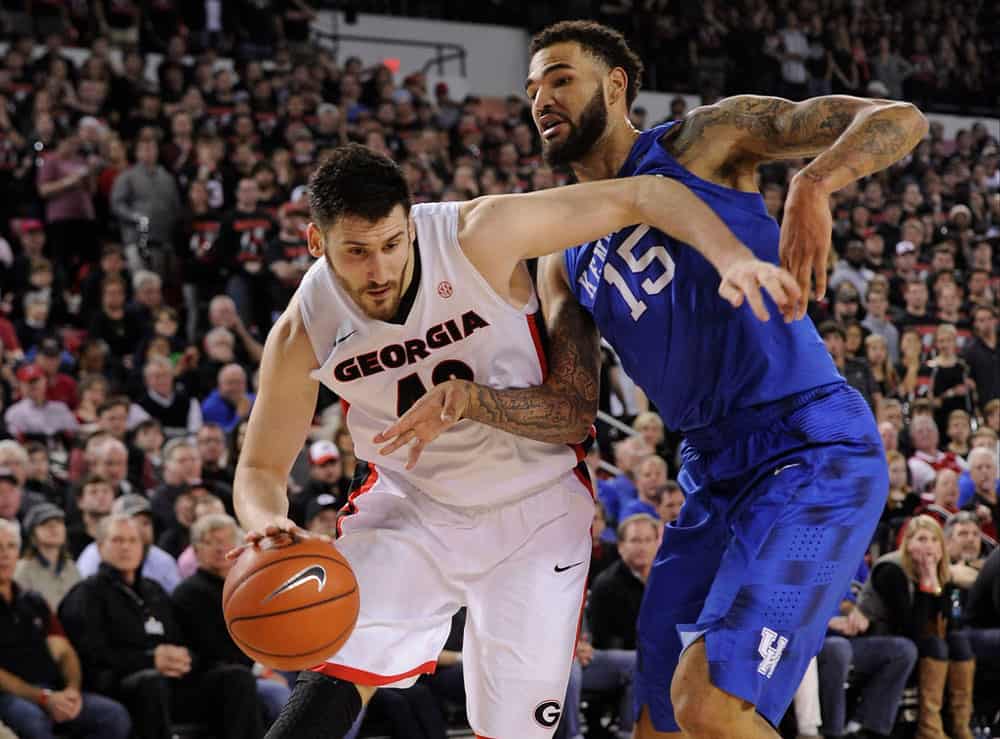 ATHENS, Ga. – The top-ranked and unbeaten Kentucky Wildcats went on a 16-to-2 run in the final 4:48 minutes to defeat the upset-minded Georgia Bulldogs 72-64 in front of a sold out Stegeman Coliseum crowd on Tuesday night.

“Really a hard-fought basketball game versus a great team that we have great respect for,” Georgia head coach Mark Fox said after the game. “Our effort wasn’t good enough. We played hard, we played very well, but we didn’t play perfect. And they are so dang good that you almost have to play perfect, and that’s not realistic. Certainly we would have liked to have made a few more free throws but we didn’t get [to the foul line] a lot. Would have liked to have shot the three better, but you’re not going to play perfect against that kind of team. You have to anticipate that you’re not going to play perfect, but we played our tails off and it just wasn’t quite good enough. They have got a great team and give them credit because they are just terrific.”

Both teams played evenly during the first half, with neither team holding a lead of more than five points at any point. Though Kentucky led for most of the opening period, Georgia kept the pressure on and went blow-for-blow with the Wildcats. Georgia had a slight edge in shooting (43 percent to 33 percent) and rebounds (24-to-19) but Kentucky did not turn the ball over once while Georgia committed five turnovers.

The teams continued to trade blows at the opening of the second half, until the Bulldogs went on a 13-to-2 run beginning at the 16:27 mark to take a 52-45 lead with 10:30 remaining. During the stretch, Georgia made six consecutive field goal attempts.

The Bulldogs extended their lead to nine, their largest lead of the night, on a tip-in from Yante Maten at the 9:12 mark, putting Georgia ahead 56-47.

Kentucky began to cut into Georgia’s lead, but the Bulldogs continued to stave off the Wildcats’ answers. At the 5:36 mark, Marcus Thornton hit a pair of free throws to put the Bulldogs up 62-56. Those would be the only two free throws the Bulldogs would make in the second half, and Georgia would be held scoreless for the next five minutes.

Kentucky began a 14-0 run with a layup by Aaron Harrison at the 4:48 mark that would last until there were just 29 seconds remaining in the game. Karl-Anthony Towns proved to be Kentucky’s go-to option in the closing minutes, scoring seven of the Wildcats’ points as the No. 1 team in the country finished the game on a 16-to-2 run to remain unbeaten.

Towns led all scorers with 19 points on 8-of-12 shooting, adding seven rebounds. Both Andrew and Aaron Harrison scored in double-digits, registering 12 and 16 respectively.

· This was the 145th all-time meeting between Georgia and Kentucky. Kentucky leads the series 119-26.

· The Wildcats won the first matchup of the season by a final tally of 69-58 in Lexington on February 3.

· This was the 16th time in school history that Georgia has faced off against the top-ranked team in the country. Georgia is 0-16 in games against the country’s No. 1 team.

· Marcus Thornton tied the school record for most games played in a career (129).

· The game featured 18 lead changes, the most in a Georgia game this year.

· Both teams saw one of their key players foul out (Kenny Gaines for Georgia, Karl-Anthony Towns for Kentucky).

The Bulldogs will travel to Auburn to conclude the regular season against the Tigers on Saturday, March 7. Auburn defeated Georgia 69-68 in the first meeting this season on February 17 in Athens. A win will give the Bulldogs 20 wins for the second consecutive season, a feat that Georgia has not accomplished since 1996-1998. Tipoff is set for 4:00 p.m. and the game will air on the SEC Network.