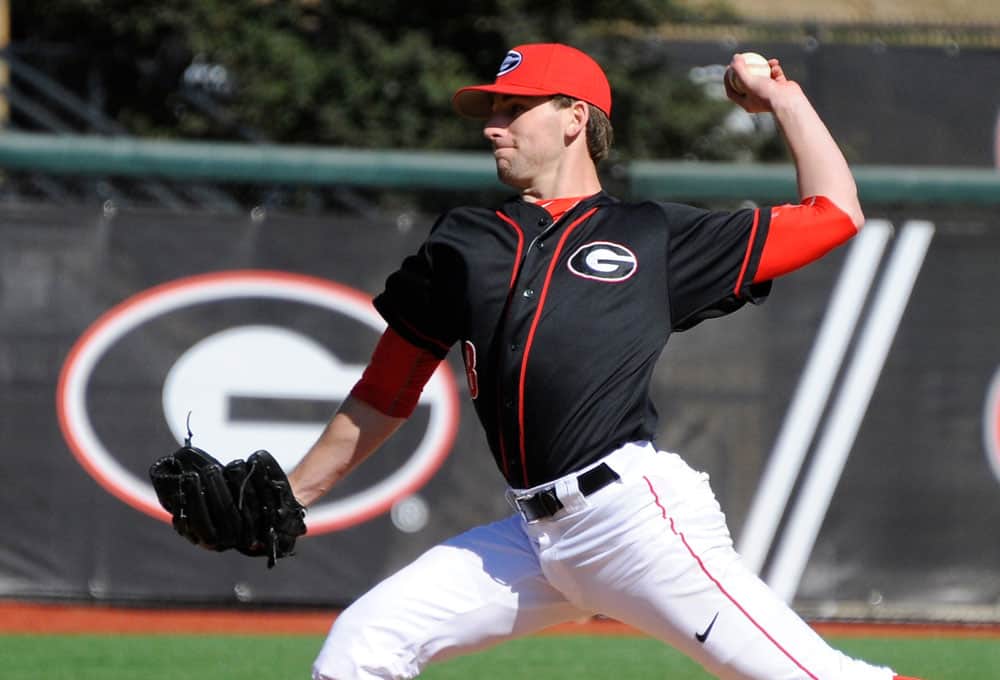 ATHENS, Ga. – A pitching duel turned in to a slugfest as Georgia clinched an SEC road series with a 12-7 win over Tennessee Saturday at Lindsey Nelson Stadium.

Georgia (14-9, 2-3 SEC) built a 2-0 lead, taking advantage of two errors by the Volunteers in the top of the sixth. With one out, shortstop Nick King delivered a single up the middle for just the second hit of the day off left-hander Drake Owenby. Sophomore Stephen Wrenn followed with a sacrifice bunt that Owenby fielded and threw wildly past first base. King raced around the bases for the first run and the speedy Wrenn made it all the way to third. With the infield in, Skyler Weber put down a safety squeeze bunt in front of the plate that catcher David Houser misplayed, allowing Wrenn to score to make it 2-0. With two outs, senior Jared Walsh smashed a pitch off the top of the wall in right center for his first career triple, brining Weber home for a 3-0 advantage.

The Volunteers (9-10, 1-4 SEC) pushed across a run in the bottom of the sixth off Ryan Lawlor. Christian Stewart reached on a two-out walk, took second on an infield single by Nick Senzel and scored on a base hit by Andrew Lee that made it 3-1. In the eighth, Georgia extended its advantage to 5-1 when the Volunteers misplayed another series of sacrifice bunts. In the bottom of the eighth, Georgia turned to the bullpen and brought in freshman Ryan Avidano. The Volunteers closed the gap to 5-4 on a three-run home run by Andrew Lee.

Georgia responded with a seven-run outburst in the top of the ninth on six hits and two more Volunteer errors as they made a season-high six miscues on the afternoon. With a 12-4 advantage, Georgia looked to Zach Waters and Christian Stewart smashed a three-run home run for the final. Five different Bulldogs drove in a run including Brandon Stephens and DJ Smith who had two-run doubles in the ninth.

“We got some good bunts down, and they got in a funk today and made some errors,” Georgia coach Scott Stricklin said. “As coaches, we’ve all had a day like that, I can think back to last year at Florida and Vanderbilt we had some games where we didn’t play very well and they took advantage of that, and that’s what we did today. We executed and it was great to see us add on some runs late. We had some great at bats in the ninth and put seven runs on the board. I thought both starting pitchers did a great job.”

Lawlor went seven innings and allowed one run on three hits with seven strikeouts to pick up a win and move his record to 3-3. Owenby got the loss, allowing four unearned runs on four hits in seven innings to fall to 1-3.