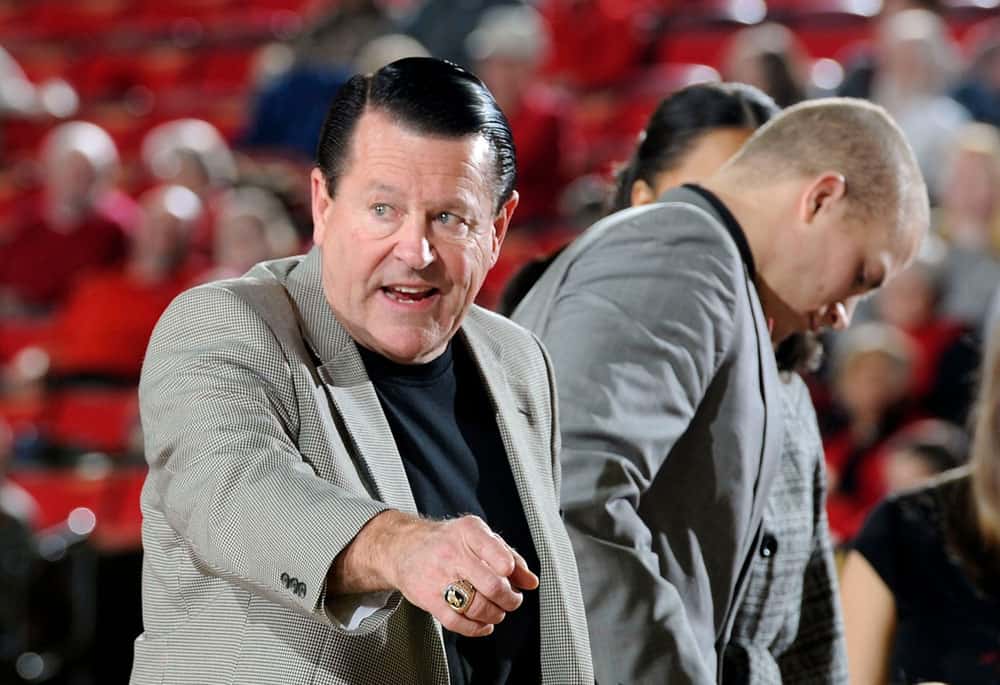 ATHENS, Ga. – Andy Landers, the only full-time women’s basketball head coach in University of Georgia history, announced his retirement on Monday. Landers recently completed his 36th season in Athens, during which he recorded his 850th win with the Lady Bulldogs.

“I feel blessed to have had the privilege of working at the University of Georgia for the past 36 years,” Landers said. “Athens is a wonderful community where I have raised my family and had the unwavering support of my wife Pam, my daughter Andrea and my son Drew. I appreciate the support of a wonderful Bulldog Nation, our loyal fans, and the Fastbreak Club members. I owe a special thanks to Coach Vince Dooley for entrusting me with the challenge of building a successful program 36 years ago and to Greg McGarity for continuing that trust and support. A big thank you to Hugh Durham for being a young coach’s mentor, to Presidents Davison, Knapp, Adams and Morehead for their guidance and leadership, to all my former and present staff members and coaches who worked tirelessly to help make the success that we have a reality.

“But most of all, I want to thank each and every player for committing to the challenge of being the best they could be, because in so doing they contributed to and established a tradition that fewer than a handful can match. They created a program that ranks among the most elite nationwide. I want to say once more that each and every honor that has come my way is the result of unselfish individuals who believed their team and the name on the front of their jersey was more important than the name on the back. Once again, thanks to everyone who has contributed to and supported Georgia Basketball, just like this University, you’re special.”

“Andy has led our women’s basketball program on an incredible journey for 36 years, and his Women’s Basketball Hall of Fame recognition in 2007 is a testimony to his impact on the world of women’s college basketball,” said J. Reid Parker Director of Athletics Greg McGarity. “Andy has poured his heart and soul into our program, and his dedication to the remarkable athletic and academic progress of his student-athletes is sincerely appreciated by everyone associated with UGA. I will also miss working alongside my good friend. We wish Andy and Pam the very best as he heads into retirement.”

“I am very appreciative of the many contributions Andy has made to the University of Georgia,” said UGA president Jere W. Morehead. “Aside from his remarkable achievements in athletic competition, I am especially thankful for the importance he has placed on the academic achievement of our student-athletes. It is a tremendous accomplishment that every four-year letterwinner Andy has coached has graduated from the University of Georgia. I am grateful for his many years of service to UGA.”

Landers was named Georgia’s full-time head coach on April 24, 1979, and he quickly turned a fledgling program into a national powerhouse. In their first six seasons of intercollegiate play from 1973-79, the Lady Bulldogs were a combined 37-85 under four different head coaches who also taught classes at UGA. In Landers’ second season, Georgia won the 1981 WNIT national title. A year later, the Lady Bulldogs played in the first-ever NCAA Tournament. The following spring, Georgia advanced to the NCAA Final Four for the first time. Two years after that, the Lady Bulldogs were 1985 NCAA runners-up.

Georgia has remained at the national forefront throughout Landers’ tenure. Most notably, the Lady Bulldogs rank No. 2 nationally in both NCAA Tournament appearances (31) and weeks ranked by the Associated Press (522). Georgia also is one of only three Division I basketball programs to post a winning record every season since women’s athletics came under the auspices of the NCAA with the 1981-82 season.

Landers’ players have excelled in the classroom as well. When current seniors Krista Donald and Erika Ford receive their degrees in May, all 67 four-year letterwinners under Landers will have received diplomas from the University of Georgia.

Many of Landers’ players have pursued professional basketball with great success. Thirty-eight Lady Bulldogs have gone on to play professionally in the U.S., Europe, Asia and South America. Headlining that list are McClain and Teresa Edwards. Edwards and McClain became teammates at Georgia in the fall of 1983 and went on to be widely regarded as two of women’s basketball’s greatest players ever. They also were the backbone of virtually every national team to represent the United States internationally for a decade, combining to win six Olympic Gold Medals. Edwards is the only basketball player to represent the U.S. in five Olympic Games, and McClain was her teammate for three of those. Both Edwards and McClain have been inducted into the Naismith Memorial Basketball Hall of Fame, the Women’s Basketball Hall of Fame and the State of Georgia Sports Hall of Fame.

It was likely hard for even Landers to fathom such an accomplishment when he arrived in Athens as a 26 year old with four seasons of head coaching experience at Roane State Community College. Landers was 82-21 at Roane, a junior college in Harriman, Tenn. In 40 seasons as a collegiate head coach, Landers compiled 944 victories, an average of 23.6 wins per year, with 32 20-win seasons and 19 top-10 final rankings.