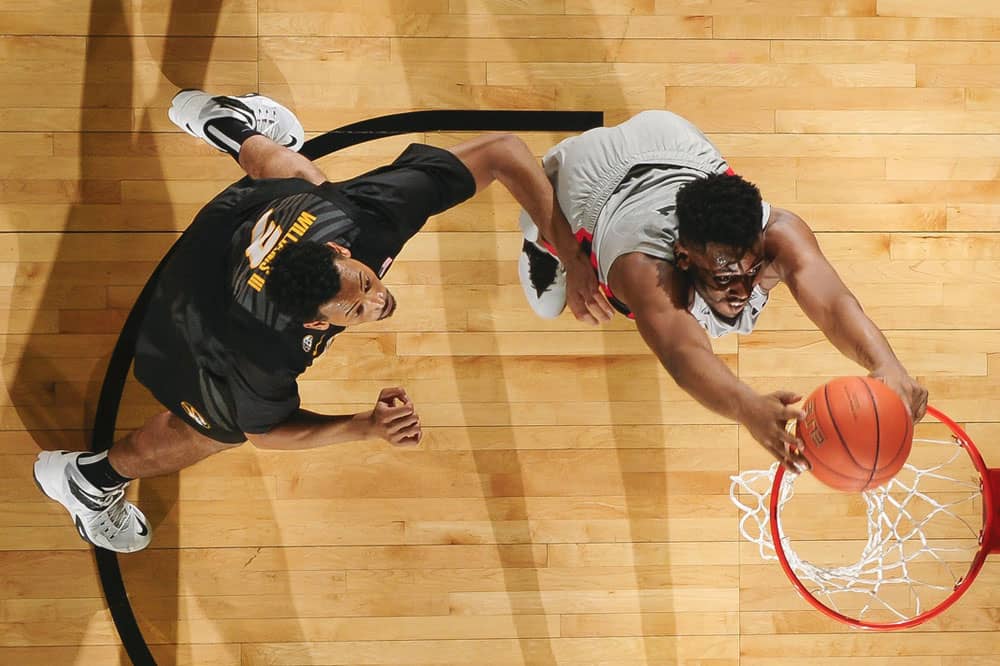 ATHENS, Ga. – The Georgia Bulldogs snapped a two-game home-losing streak with a 68-44 rout of the Missouri Tigers, earning their 10th SEC win of the season on Saturday.

The win was by the largest margin of victory in an SEC contest under Mark Fox. The win also gave the Bulldogs their 10th SEC win of the season, reaching the plateau for the second consecutive season.

The Bulldogs registered a season-high 18 assists spread about between seven different players. Nemanja Djurisic paced the Bulldogs with 14 points on 5-of-9 shooting, and added five rebounds and three assists. Cameron Forte and J.J. Frazier each scored 10 points off the bench.

“This was a good win for our team,” Fox said after the game. “SEC games are hard. Missouri obviously has a new staff and is in a rebuilding year, but their kids really battled. I was really pleased with how we started the game. I didn’t think we handled the situation great once we got a big lead, we kind of took our foot off the gas there for a minute, but certainly at the end of the day it’s a really good win for Georgia.”

The Bulldogs took an 18-point lead into the locker rooms at half time, registering their second highest lead at the break of the year 41-23. Georgia got everyone involved, seeing 8 different players score in the opening period while racking up 11 total assists. Georgia was incredibly efficient, shooting 47 percent from the field, 55 percent from 3-point range and posting an impressive assist-to-turnover ratio of 11-to-3.

Missouri struggled from the field for the entirety of the opening half, hitting just 8-of-31 field goal attempts. The Tigers’ leading scorer, Johnathan Williams, shot just 1-for-7 from the field in the first period.

Georgia opened the second half on a 14-to-4 run to extend their lead to 28 points at the 12:43 mark. Missouri then pressed and was able to cut into the lead slightly, holding the Bulldogs scoreless for just over six minutes. Georgia then responded and was able to hold off any potential comeback attempt.

The Bulldogs kept the lead above 20 points for the final 17:49 of the game, and allowed every rostered player to see playing time, including Juwan Parker who saw his first action since injuring his Achilles tendon against Florida on January 17.

“We shared the ball, first of all,” Fox added. “We shot the ball fairly well in the first half, we defended very well, we rebounded well, and we played a pretty complete game. Midway through the second half we had a little funk in there and didn’t play as well, but we did a lot of things that we like. Certainly that allowed us to get a lead and finish the game.”

Williams and Namon Wright tied for the team-lead with 10 points for Missouri on a combined 6-of-21 shooting.

· This was the seventh all-time meeting between the two schools. Georgia narrowed the margin to 4-3 with today’s win.

· The 24-point margin of victory is the largest in an SEC win under Mark Fox. The Bulldogs had won three SEC games by a 22-point margin in Fox’s tenure.

· Georgia’s 11 first half assists matched, or surpassed the team’s totals for 10 games during the 14-15 season.

· The Bulldogs finished with a season-high 18 assists.

· Georgia attempted 66 field goals on the day, the third-most of the season.

· Sophomore guard Juwan Parker returned to action for the first time since the Florida game on January 17.

The Bulldogs will host currently top-ranked and unbeaten Kentucky on Tuesday, March 3. This will be the first time Kentucky has played at Stegeman since 2012-13, when Georgia defeated the Wildcats 72-62. Kentucky won the first matchup of the season, 69-58 in Lexington. The game is set to tipoff at 9 p.m. and will air on ESPN.