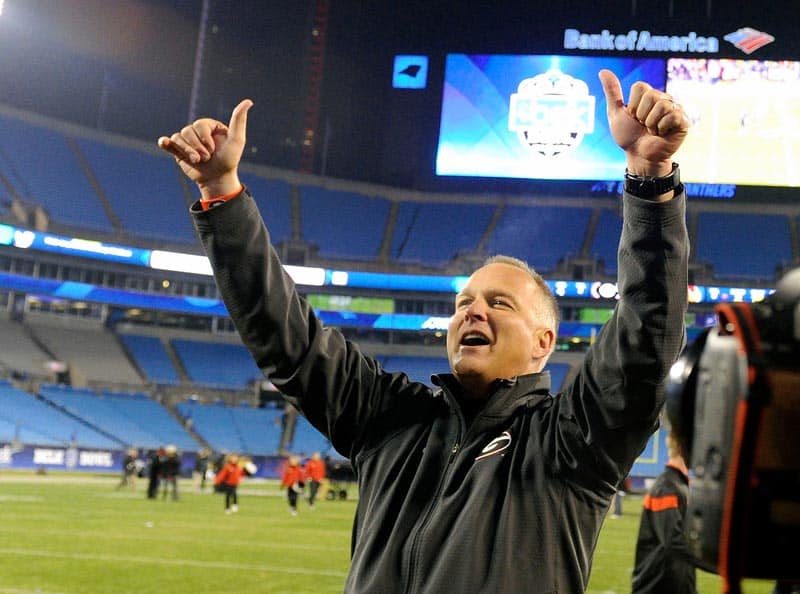 UGA head football coach Mark Richt is set to receive a contract extension, according to an email sent to top donors that was obtained by UGASports.com.

Here is a portion of that email that was sent from UGA Athletic Director Greg McGarity:

“I look forward to working alongside Mark in the future and in helping him move our program forward in all areas.  We will be working on a contract extension with Mark over the coming days.  I know Mark is focused on completing his coaching staff and recruiting,” McGarity said in the email. “Our support staff is also focused on a number of construction projects, including the indoor practice facility and future enhancements to football areas in Sanford Stadium.  We will keep you updated on progress in these areas as they develop.

Richt is currently under contract through the 2017 season and makes about $3.2 million annually.

In 14 seasons as the head coach of the Georgia Bulldogs, Mark Richt has an overall record of 136-48 (.739), two SEC Championships, and six SEC Eastern Division Championships. The Bulldogs have also been to a bowl game all 14 seasons, winning nine.

However, Georgia has not won a conference title since 2005 and have never played in a national championship game.

Richt had to dispel rumors of him retiring after the Belk Bowl in his post-game press conference. The rumors apparently started on message boards and, in this day and age, compelled a beat writer to ask Richt directly.

“I have no idea,” Richt said in regards to where the rumor came from.

When asked if he’d be back at UGA next season, Richt said: “That’s the plan. You can go ask the team.”

Richt has a lot of work to do heading into the 2015 season. He needs to hire an offensive coordinator/quarterbacks coach, find a new director of player personnel (Ronnie Letson is headed to Colorado State as QB coach), and groom the next starting quarterback in Athens.

As far as recruiting, the future is bright. UGA currently has the No. 3 recruiting class for 2015 according to both Rivals.com and 247Sports.com. For 2016, the Dawgs have commitments from 5-star recruits Jacob Eason (QB) and Ben Cleveland (OT).