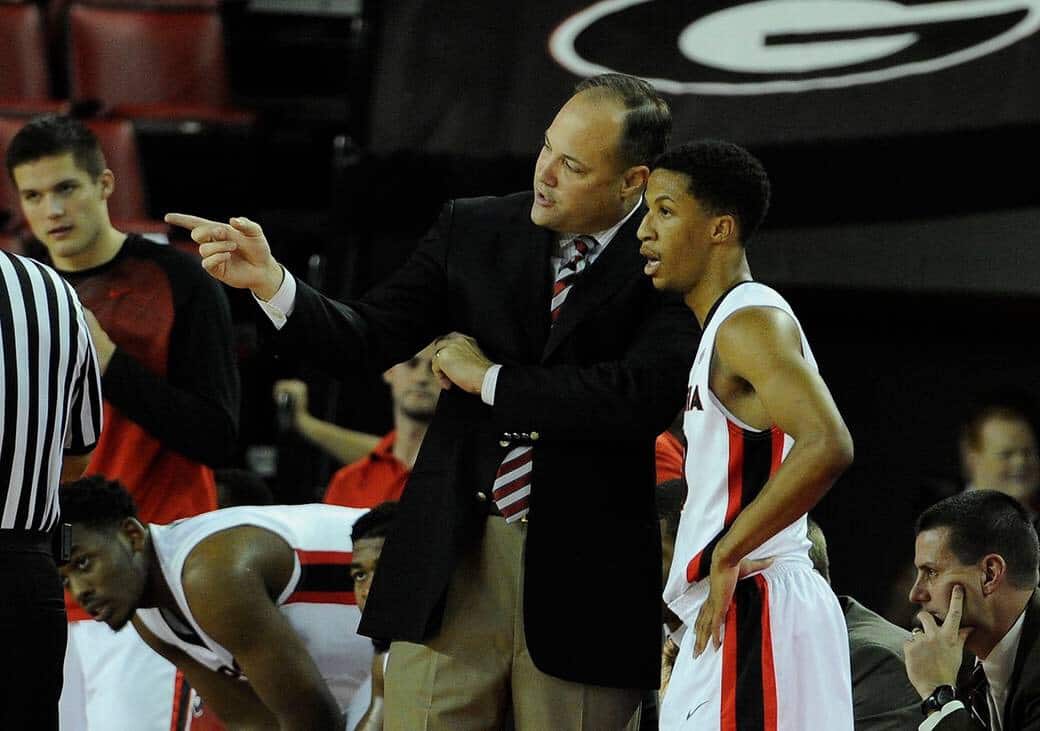 ATHENS, Ga. – J.J. Frazier scored a career-high 37 points — including perfect 7-for-7 shooting from 3-point range — to pace Georgia to a 72-66 win over Mississippi State in an SEC basketball game here Saturday afternoon.

As it turned out, the Bulldogs (13-5, 4-2) needed nearly every single point Frazier scored to hold off the hard-charging State Bulldogs (9-10, 2-4). Georgia built a double-digit lead early in the second half but saw State climb back within a single point in the final minutes.

Clutch free throws by Charles Mann, Nemi Djurisic and — who else? — Frazier in the final 1:45, combined with three defensive stops, sealed the Bulldogs’ fourth road victory of the season.

“This was a hard-fought game and a great win by our team,” Georgia head coach Mark Fox said. “The great thing about J.J.’s day was that almost everything he got came within our offense. We didn’t run anything for him all day. He got a couple of baskets in transition, but everything else came just by running our offense.”

Frazier made a bit of history with his memorable day. His 37 points were the most by a Bulldog in an SEC game since Dominique Wilkins scored 37 against Florida in January of 1981. His 7-for-7 shooting from the 3-point line equals Ezra Williams’ UGA single-game record, set against LSU in 2003.

“The first one felt really good coming off my hands and after that, I just felt really comfortable and confident shooting the ball,” Frazier said. “I felt like everything I put up was going in. “My teammates did a great job finding me in the offense. I can’t remember the last time I made all my 3-point shots like today.”

It was Frazier who got Georgia settled after State took control to open the game. The maroon Bulldogs sank a 3-pointer on their first possession and sprinted to a 14-6 lead with 14:07 left. Frazier’s first trey of the afternoon, at the 12:56 mark, trimmed the margin to five. His second 3-pointer pulled the Dogs even at 17 with 9:37 left in the first half.

A three by Mann — on the day, Georgia made 11 of 18 from beyond the arc — with 50 seconds left in the first half gave his team the lead for good at 33-31. The Bulldogs then followed a State miss with Frazier’s third bomb of the day, giving Georgia a 36-31 margin at intermission.

The sophomore guard scored seven points in the first two minutes of the second half to seemingly break the game open. His fifth 3-pointer of the day got the Bulldogs a 46-34 lead and his next bucket, at the 15:16 mark, kept the 12-point margin at 48-36.

The Bulldogs survived State’s first push in the second half, when it outscored Georgia 12-1 over a 3-minute span. Craig Sword’s free throw with 12:48 got the host Bulldogs within 49-46, their closest deficit of the half.

Frazier, however, sank another three and followed with a layup with 9:03 left to restore Georgia’s lead back to eight at 56-48.

The Bulldogs kept State at arm’s length until a series of 3-pointers, the last of which came from I.J. Ready with 2:27 left, cut the margin to a single point at 65-64.

Mann sank two foul shots with 2:06 left to restore Georgia’s lead to 67-64. State then missed two short jumpers on its next trip, Kenny Gaines rebounded for the Bulldogs and passed to Djurisic, whose two free throws with 1:45 boosted the lead to five at 69-64.

Appropriately, however, it was Frazier who saved the day for Georgia. Trailing 69-66, MSU missed three consecutive jumpers and the 5-10 guard rebounded the third miss. He then missed the front end of a one-and-one free throw but chased down the long rebound and was fouled again. With a second chance and this time in the double bonus, he calmly sank both to boost Georgia in front 71-66 with 26 ticks left.

Georgia resumes its SEC schedule with a home contest against Vanderbilt on Tuesday night. Tipoff is at 7:00 p.m.

Worth Noting…
– Georgia improves to 13-5 overall, 4-2 in the SEC
– The win was Georgia’s third straight in Starkville and improves its series lead to 55-53.
– J.J. Frazier’s 37 points were the most by an SEC player this season.
– His 7-for-7 effort from 3-point range matched the UGA single-game record for perfect shooting, set first by Ezra Williams against LSU in 2003.
– In their current 4-game winning streak, the Bulldogs have made 19 of 24 free throws (86 percent) in the final minute of play.