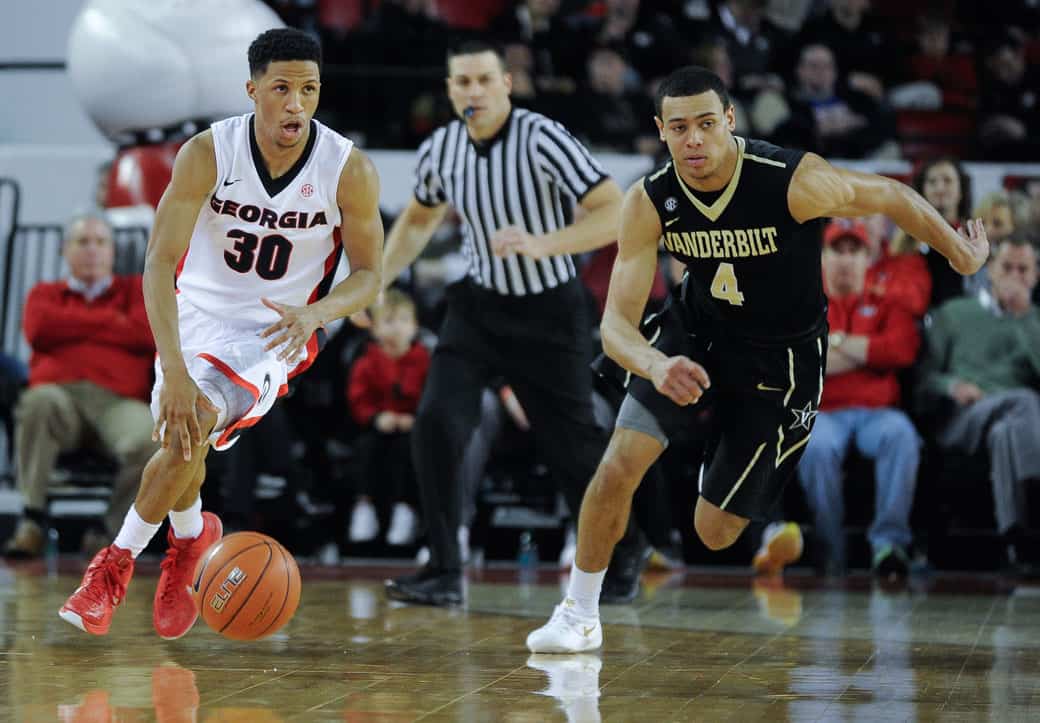 ATHENS, Ga. – The Georgia Bulldogs won their fifth consecutive SEC contest, posting a 70-62 victory over Vanderbilt to sweep the season series against the Commodores on Tuesday night.

Georgia defeated Vanderbilt 70-67 earlier in the year in Nashville on January 14 to snap a nine-game losing streak to the Commodores. That was also Georgia’s first SEC victory of the 2014-15 campaign and the Bulldogs have now won five straight conference games for the first time since the 2012-13 season (1/26 at Texas A&M-2/9 vs. Texas A&M).

Four Bulldogs scored in double figures on Tuesday night, with Nemanja Djurisic leading the pack with 15 points. He connected on 3-of-4 shots from 3-point range and added a game-high nine rebounds as well. Marcus Thornton (14), Kenny Gaines (13) and J.J. Frazier (12) were the other Bulldogs that finished in double figures.

“I’m happy we won the game,” Georgia head coach Mark Fox said following the game. “I’m glad we don’t have to play Vanderbilt again in the regular season. They’re hard to play against and they’re extremely well-coached. I thought they outplayed us in the first half. I got after our team pretty good during the half because I felt like Vandy was playing a little harder than we were. I thought we were kind of playing cute and falling in love with the three. I also told our team that I don’t think I’ve coached our team very well offensively since we’ve had everybody get hurt. I don’t think we’re playing anywhere near where we can, so some of our turnovers and struggles are my fault. But it’s good to win and beat a team that’s going to win its share of ballgames.”

The Bulldogs also pulled down nine offensive rebounds and out-rebounded the Commodores 21-to-12 in the opening period as the Bulldogs took a 31-27 lead into the locker rooms at the half.

Vanderbilt started the second half hot, connecting on its first four field goal attempts to take a 36-35 lead. Georgia responded in a big way by busting open a 20-5 run over the next 10 minutes, giving the Bulldogs a 55-41 lead with 7:27 remaining.

The Commodores fought back numerous times over the final stretch, cutting to within five points of Georgia’s lead on four separate occasions in the next six minutes. The Bulldogs held their ground and knocked down nine of their last 10 free throw attempts in the final 1:30 of the game to preserve the 70-62 win.

As a team Vanderbilt committed just seven turnovers on the night but the Commodores shot just 36 percent from the field, hitting only 8-of-22 attempts from 3-point range. Damian Jones paced the Commodores with 16 points on 6-of-10 shooting, and was one of just two Vanderbilt players that shot over 50 percent from the field. Jeff Roberson finished with 11 points on 4-of-6 shooting.

· This was the second meeting of the season, and 139th all-time meeting between the Bulldogs and the Commodores. Vanderbilt still leads the series 88-51, but Georgia has swept the season series after losing the previous nine consecutive contests to the Commodores.

· This was the first time that Georgia has won five consecutive SEC games since the 2012-13 season.

· Georgia shot over 50 percent from 3-point range for the fourth time in the last five games, connecting on 9-of-17 shots from deep.

· J.J. Frazier made a career-high seven free throws, connectings on all seven attempts.

· This was Mark Fox’s 99th victory as the head coach at UGA, and the 222nd of his coaching career.

Georgia will hit the road for its next two matchups, starting off with a trip to Columbia to take on South Carolina on Saturday, January 31. Tipoff is set for 4:00 p.m. and the game will air on ESPNU. The Bulldogs will then travel to Lexington to take on the currently undefeated and top-ranked Kentucky Wildcats on Tuesday, February 3, with tipoff scheduled for 7:00 p.m. on ESPNU.